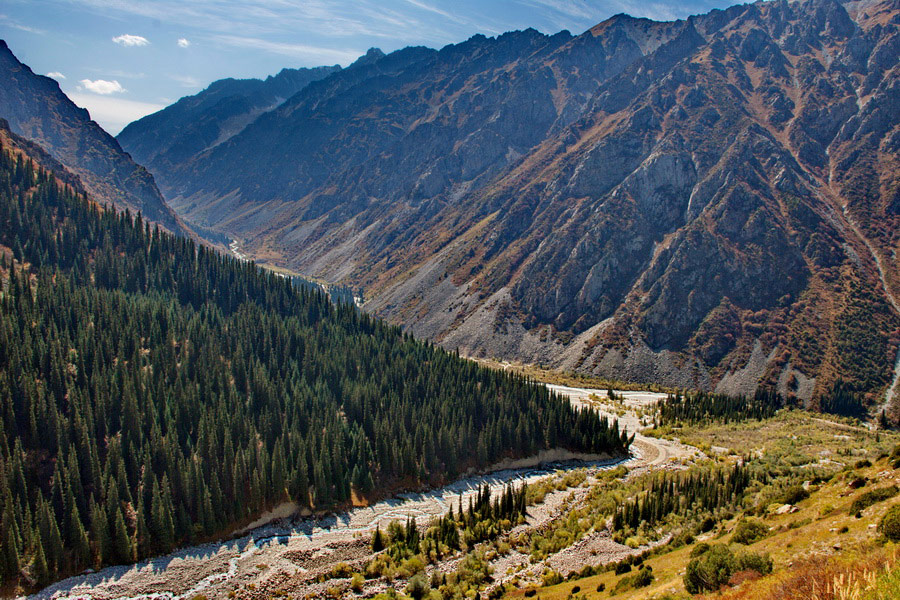 National parks and protected areas in Kyrgyzstan cover almost 1.5 million hectares, which is about 7% of the country’s total area.

There are different types of protected areas, including 10 nature reserves, 13 national parks, 19 natural monuments, and 45 management areas, which include botanical reserves, forest reserves, and zoological reserves. These national and nature parks are designed to protect vulnerable and unique ecosystems, while also ensuring that the area is open for recreation in a safe and sustainable way.

Ala-Archa National Park: This national park was founded in 1974 to protect the Ala-Archa River and its surrounding area. The park not only includes several famous peaks and glaciers, including Mount Komsomolets (groups gather every May 1st to climb this peak) and Peak Semyonova Tianshanski, but also a lodge and a mountaineers cemetery. Located just 35 km (22 miles) from Bishkek, Ala-Archa is a popular place for picnickers and hikers. The name comes from the Kyrgyz word for juniper, archa, a plant that is burned to remove bad spirits from houses.

Besh-Aral State Nature Reserve: Located in the far southwest corner of Jalal-Abad Region on the border with Uzbekistan, this reserve was founded in 1979 to preserve the natural forests of the Chatkal Range, as well as to preserve the habitat of the threatened Menzbir’s Marmot, as well as Grieg and Kauffman tulips.

Besh-Tash State Nature National Park: Covering the Besh-Tash River and the Besh-Tash Lake, this reserve is home to some of the most unique and beautiful forests. Some parts of the reserve, which was created in 1996, are strictly for protected areas, and some areas have regulated economic activity.

Chong-Kemin State Nature National Park: Founded in 1997 in the Chong-Kemin River valley, this park includes much of the forests of the Kemin District. The park’s main task is to preserve the unique landscapes with their diverse flora and fauna. The park also contains game and botanical reserves, as well as the mausoleum of Shabdan Baatyr.

Issyk-Kul State Nature Reserve: The first nature reserve in Kyrgyzstan, founded in 1948, was created to protect wetlands and the birds who nest in them. The wetlands around Issyk-Kul are listed in the Ramsar List as Wetlands of International Importance.

Issyk-Kul Biosphere Reserve: In 2000, the entirety of Issyk-Kul Region was acknowledged as part of the UNESCO World Network of Biospheres, and is part of the Man and Biosphere Programme. This reserve occupies 43,100 sq km (16,641 sq miles), or about 22% of Kyrgyzstan’s total land area. A large variety of ecosystems are represented in the reserve, from deserts to mountains to marshlands. The reserve is also home to some endangered species, including the Marco Polo sheep, the Siberian ibex, snow leopards, and Tian Shan brown bears. Of particular interest in this Biosphere Reserve is how people interact with nature, as the area is a huge tourism destination, and the higher mountains are used as summer pastures. Part of the goal of the reserve is to encourage sustainable development that helps protect the environment even as the economy grows.

Karakol State Nature National Park: Founded in 1997, this park covers a total of 38,256 hectares, including 4,767 hectares of forest.

Kara-Shoro State Nature National Park: Founded in 1996 in order to protect complex geological formations and endangered species. Although it covers 8,450 hectares, there are no roads in the park itself.

Karatal-Japaryk State Nature Reserve: This reserve was founded in 1994 in order to protect endangered species and preserve the ecological balance of the Central Tian Shan. The reserve covers the high mountain lakes of Son-Kul and Chatyr-Kul, and places in Chatyr-Kul are wetlands on the Ramsar List.

Kulan-Ata State National Park: Established in 2004 by presidential decree, this park’s aim is to preserve the biodiversity and rich gene pool of the forest, and to expand environmental protections in Kyrgyzstan. The two detached areas, Kulan-Ata and Tonzoo, cross the boundaries between broadleaf and coniferous forest, though the fir and juniper forests predominate in the mountainous landscape. There are about 600 species of plants in the reserve, with 200 being found only in Kyrgyzstan, and a number being listed as endangered.

Kyrgyz-Ata State Nature National Park: Located in Osh Region, this park was created in 1992 to preserve the rich juniper forests found in the area.

Naryn State Nature Reserve: Various coniferous forests, alpine meadows, and other vulnerable ecosystems are protected by this reserved, founded in 1983.

Padyshata State Nature Reserve: Established in 2003, this reserve in Jalal-Abad Region was created to preserve the biodiversity of juniper forests and Semenov’s first found here.

Saimaluu-Tash State Nature National Park: Though this park, established in 2001 in the eastern part of Jalal-Abad Region, is most famous for its petroglyphs, it is also known for its role in protecting the biodiversity of the region.

Salkyn-Tor State Nature National Park: This park is home to a project aimed at reestablishing the Tian Shan maral, a species of elk native to the region that is currently endangered. This park was established in 2001.

Sarychat-Ertash State Nature Reserve: This reserve was established in 1995 mainly in order to provide habitat for the endangered snow leopard and the argali, a large mountain sheep native to the region. Siberian ibex, lynx, brown bears, wolves, Pallas’s cat, and foxes can also be found here. The park is closed to any usage, including tourism.

Sary Chelek State Biosphere Nature Reserve: Located on the southern spurs of the Chatkal Range in Jalal-Abad, this park was established to preserve the areas around Sary Chelek Lake in 1959, and in 1979 was expanded to a biosphere reserve. The area is notable for its forests and unique plant species.

Jeti Oguz is a sandstone formation about 25 km (15 miles) southwest of Karakol. The name means “seven bulls”, which comes from the fact that the rocks look like seven bulls. Jeti-Oguz Rocks are a protected Nature Monument.