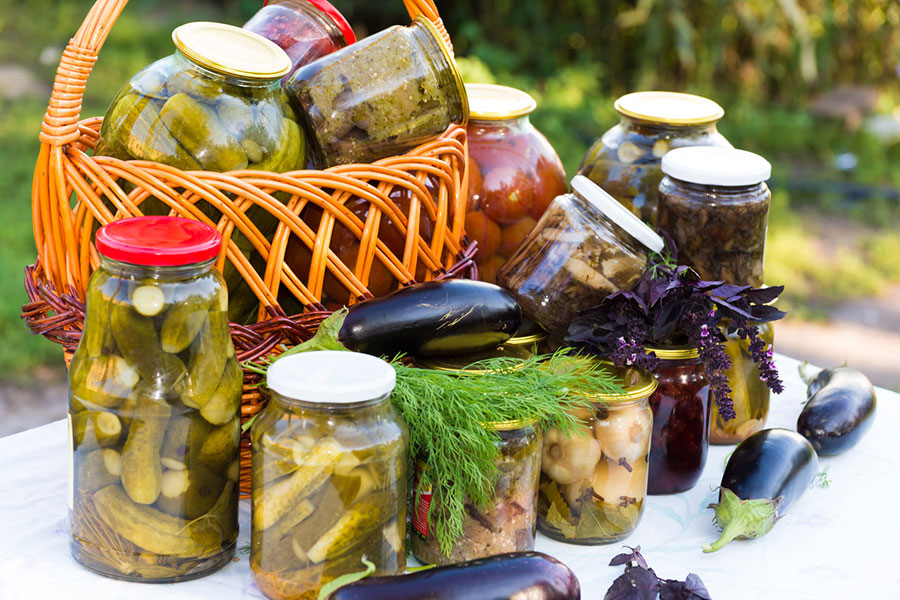 Russian food couldn’t exist without pickles and other preserves. Their tangy flavors decorated tables, increased appetites, and added new tastes to nearly any dish. Russian pickles and preserves arose from the need to preserve food throughout the long winters, in the days before refrigeration. This is also why many recipes included lots of preserved ingredients, as pickles could be eaten on their own and added to soups, salads, and sauces. Plus, jams were essential when drinking tea on a cold winter day. Russian cuisine was not just about the dishes on the table, but about gathering with friends and neighbors around the samovar and enjoying a host’s own jams, made from homegrown fruits and vegetables.

Russian cuisine features many ways of preserving food, so that winter meals were as varied and tasty as summer meals. Brining was the most popular way of preserving foods ever since it arrived in Russia in the 12th century, with cucumbers being the most popular item to brine, though tomatoes, peppers, grape leaves, onions, and mushrooms were also common. Each household had its own recipe for brining, with either more salt or more spices, depending on tastes.

Brined products weren’t just tasty, but were also quite healthy. Natural brine contains a lot of healthy bacteria, while also preserving the vitamins and nutritional properties of the fruits and vegetables. Even the natural cellulose of fruits and vegetables, which can be hard to digest when raw, becomes much easier on the body after brining.

Brining also included adding herbs, spices, garlic and other items to give the brine a better taste and smell. The most popular additions were dill, horseradish, garlic, celery, cherry leaves, oak leaves, and currant leaves. For a little extra spice, sometimes spicy peppers were also added.

The methods for making soaked fruits and berries is practically the same as centuries ago. The fruits are picked and sorted, and then sealed in jars with a sweet brine, sometimes with extra sugar added. Yeast then turned some of the sugar into alcohol, which helped preserve the fruits. The sweet brine was then used for making various drinks, which tasted similar to kvass (a fermented drink made from bread). Today, plastic jars are used for soaked products, though the best products are made in wooden barrels.

Our ancestors didn’t know what happened when they fermented or pickled products, but now we know that pickling is possible only with lactic acid bacteria. These microorganisms eat sugar and turn it into lactic acid, which then kills bad bacteria and prevents rotting.

The most popular Russian pickled product was sauerkraut, made from pickled cabbage. Each family had their own recipe for this dish, with different amounts of different items: cranberries, carrots, apples, beets, dill, and various herbs and spices.

Marinades, in comparison to pickles and brines, can last for much longer. The main ingredients for Russian marinades were water, salt, and vinegar or some other acid, plus natural fruit and berry juices that had a sour taste. Making a marinade was easy: bring water to a boil, add salt, vinegar, garlic, seasoning, and herbs. The final product is poured into a dish with prepared vegetables, fruits, or fish, and then covered and placed in a cool spot. Now, marinades are also stored in sterilized glass jars.

For centuries, jams have been essential when drinking tea in Russia. Fruits and berries were boiled with honey or molasses, as sugar was expensive and not readily available. Another option was to just boil the fruits in their own juices. The big Russian oven was necessary, since it could boil jams for the five to six hours necessary. The art of making jams was taught at boarding schools for noble girls, and at gatherings in villages for peasants.

Other Ways of Preserving Foods for Winter

Preparing and preserving foods for the long Russian winter was a difficult task. Fish from the rivers and game from the woods could be frozen in unheated huts, and was butchered before freezing to simplify cooking. Berries were also frozen, and then could be made into juices, desserts, and sweet pies. Many other items were dried, as drying allowed them to stay edible for a long time, without losing any nutritional value or taste. Mushrooms, apples, pears, plums, peppers, and tomatoes were all commonly dried. In comparison to pickled products, dried products didn’t take up as much space or require as much attention. Before they were dried, products would be washed and soaked in cold water.