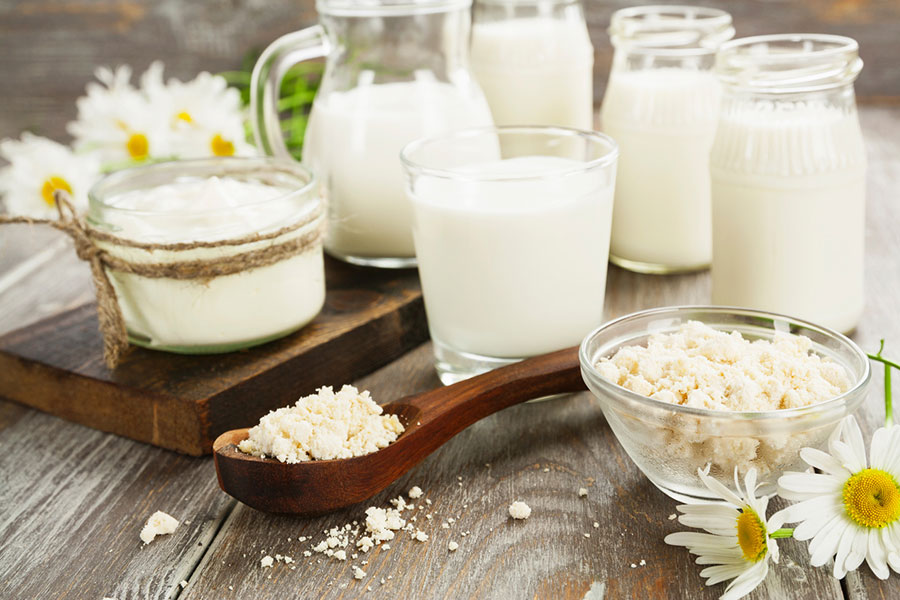 Without dairy products, russian foods would not be as diverse or flavorful as they are. Whole milk is used in a variety of dishes, from oatmeal to soups with milk. There are also dishes that use milk products, such as tvorog, kefir, and cheese. Milk was available to even the poorest of peasants, as many peasants had cows or had neighbors who would share milk. Whole milk, butter, and sour cream are important ingredients in many dishes (sour cream is essential to enjoying a bowl of borscht), but there are also other dishes in Russia made from mainly russian dairy products.

Tvorog - Tvorog is similar to cottage cheese, farmer cheese, or quark, and is a thick curd cheese made from fresh milk. The Russian version tends to be a little drier and harder than cottage cheese, with a slightly sweet, fresh taste. Tvorog can be eaten with sour cream, milk or jam for breakfast, and is popular as food for babies because of it’s high protein content. Tvorog can also be wrapped in blini (crepes) or fried into thicker pancakes (cyrniki) with raisins or nuts. For an evening meal, enjoy tvorog in boiled dumplings (vareniki) and have some baked goods with tvorog (like sweet pierogies) for dessert.

Varenets - This drink, traditional in Siberia, is made of sour cream added to baked milk. This dish is popular because of the probiotic cultures that it contains, and because of its sweet taste and creamy color.

Prostokvasha - This variation of sour milk is made by adding a fermentation agent (sour cream, rye bread, or acid) to boiled milk and letting it sit for 12 hours. It’s also possible to make sour milk by leaving milk in a warm place in a container covered with a piece of cloth and letting it ferment by itself. Sour milk is safe to eat for much longer than fresh milk, so in the days before refrigeration, sour milk was a way to preserve milk.

Smetana - No list of russian food would be complete without sour cream (smetana in Russian). It’s impossible to eat soups or dumplings without sour cream, and it is also used as an ingredient in a large number of dishes, from appetizers to desserts to baked goods.

Kefir - Kefir is a slightly sour fermented milk drink that can be enjoyed alone or used in dishes. Though kefir is traditionally from the Caucasus, it has been a part of Russian cuisine for centuries. Okroshka, a cold soup popular in the summer, is made with a base of kefir with added meat and vegetables.