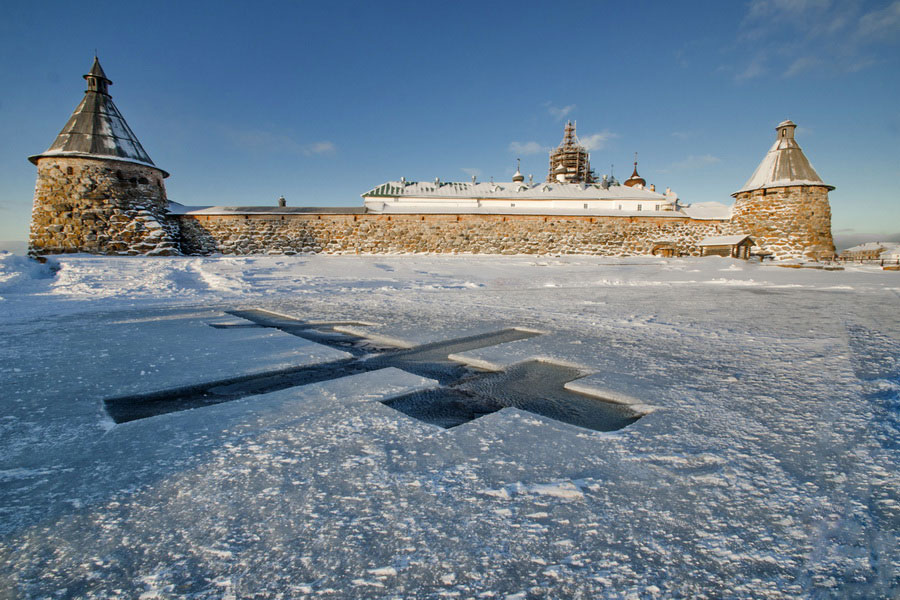 Epiphany in Russia is observed on January 19 in remembrance of the baptism of Jesus by John the Baptist, which according to the Orthodox calendar occurred on this day. One of the oldest holidays on the Christian calendar, it is a major celebration in Russia, a predominantly Orthodox country.

Although a distinctly religious holiday observed by Russian believers, those who are nonreligious or adhere to other faiths can still appreciate the scale of the celebration and the interesting water-based rituals associated with it.

Understanding the spiritual meaning of epiphany helps to shed light on the rituals which are observed for the holiday. John the Baptist was known for preaching sermons on the need for repentance and for baptizing many people who came to listen to him preach. At the age of 30, Jesus himself asked John to baptize him in the Jordan River, which John reluctantly did. After the ceremony, the voice of God was heard from heaven declaring Jesus to be His Son, after which the heavens opened and the Holy Spirit descended on Jesus in the form of a dove. This event made it clear to all who were present that Jesus was of divine origin and also provided a picture of the Holy Trinity: God the Father, God the Son and God the Holy Spirit.

On the day before Russian Epiphany, called Epiphany Eve, Orthodox Christians usually adhere to a strict fast. They are only permitted to eat sochivo, a porridge which can be made from a variety of cereals but is most often prepared from wheat, lentils or occasionally rice. Sochivo may also be eaten after the liturgy on Epiphany itself, but only after the candle has been extinguished and the communion with special epiphany water has been taken.

As the day of Epiphany dawns, the melodious clang of church bells can be heard across the country as large crowds gather to attend a special prayer liturgy. This Epiphany service is held at every Orthodox church in the nation, with attendance mandatory for Orthodox Christians. After listening to a sermon, parishioners pray, light a candle, confess their sins, participate in communion and drink special Epiphany water. Before departing, each family can bottle up some of the holy drink to take home with them, which they can then save for the coming year for either drinking or cleansing.

Yet the most unusual tradition for Epiphany in Russia is a ritual bathing in frigid waters. In preparation for this event, large ice holes are cut in the shape of a cross into frozen rivers, lakes and artificial reservoirs. Alternatively, special fountains or dunking booths may also be placed in city centers and town plazas. Participants are expected to submerge themselves 3 consecutive times in the water, which is often referred to as the “Jordan”. Although bathing in the frigid waters is voluntary, many believers choose to take part in this rite, as it is widely believed that it has the power to revitalize the whole person through cleansing of both the body and the soul.

Epiphany   This is a Christian holiday in honor of the baptism of Jesus Christ in the Jordan River. Perhaps the most interesting tradition associated with this holiday in Russia is the baptismal bathing.
Russia
Russia