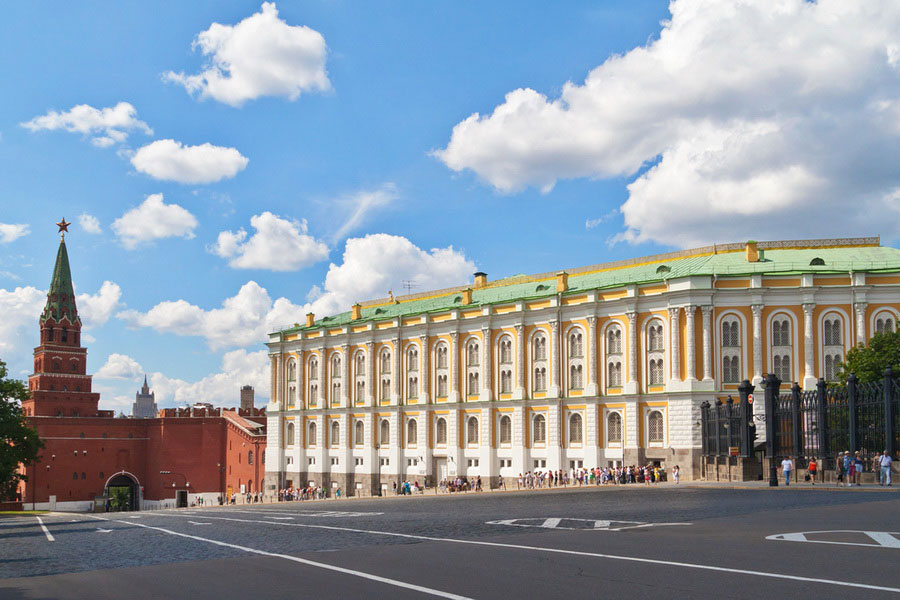 The storage of the imperial treasures, the famous Armory of the Kremlin, is a part of the Grand Kremlin Palace and the oldest museum in Moscow, holding the unique works of applied art and material culture.
The Kremlin Armory was on the basis of the tsars’ treasures, which grew out of the tribal treasury of Moscow princes mentioned in the documents dated the 14th century. It was founded by Moscow Prince Vasily III as a workshop producing and storing military weapons and armor. Over time, it has become the major repository of antiquities of great historical and artistic value. Numerous foreign ambassadors brought Moscow princes expensive gifts: silver goblets and precious fabrics, military equipment, ceremonial horse harnesses. Ivan III ordered to build a separate two-storey stone storage for the fabulously sprawling treasure, which was soon erected between the Archangel and the Annunciation Cathedrals. It housed not only the repository but also the workshops. There the masters produced ceremonial and combat weapons, armor; painters painted the royal mansions, Moscow cathedrals and churches, created icons and portraits of Moscow nobility; engravers, silversmiths manufactured amazing pieces. To work in the numerous workshops of the Moscow Kremlin the most talented masters from all over Russia were selected. In the beginning of the 19th century the Armory became the imperial palace museum. The permanent museum exhibition was opened in 1814. In 1851 the construction of the new building for the Armory, on the Moskva River, richly decorated with white stone carved columns and window casings characteristic for ancient mansions was completed.

After the October Revolution of 1917 the Armory received private collections, the expropriated treasures from the ruined monasteries and temples. In 1924, it housed the Museum of Applied Art.

At present, the unique exhibition of the Armory has approximately four thousand items of applied art from Russia, Europe and the East dated the 4th – 20th centuries. The highest artistic level and particular historical and cultural value brought the Moscow Kremlin Armory its world fame.

The most part of the exhibition contains a huge collection of ancient royal arms, military trophies of the epoch of Peter I, the monuments of Russia's military glory from the time of Alexander I and Nicholas I, a large number of objects from Konyushennaya royal treasury. Among the special exhibits is the Monomakh's cap, the most ancient crown of Russian tsars, decorated with four-point cross and precious stones.

The first floor displays the outfits of the higher clergy made of expensive fabrics, the collection of thrones, carriages and coaches belonging to Russia's rulers, horse ceremonial harnesses, the apparel of the 16th – 17th centuries, and dresses of Russian Empresses. The second floor is occupied by the collection of gold and silver items produced by Russian masters in the 12th – 20th centuries, Oriental and Western weapons, ceremonial armor; there is also the Hall of ambassadorial gifts and West European silver.

The Armory is one of the richest treasuries of the world, which continues to grow in our time: the collection of constantly updated with rare artifacts given to the museum by various government agencies and individuals.