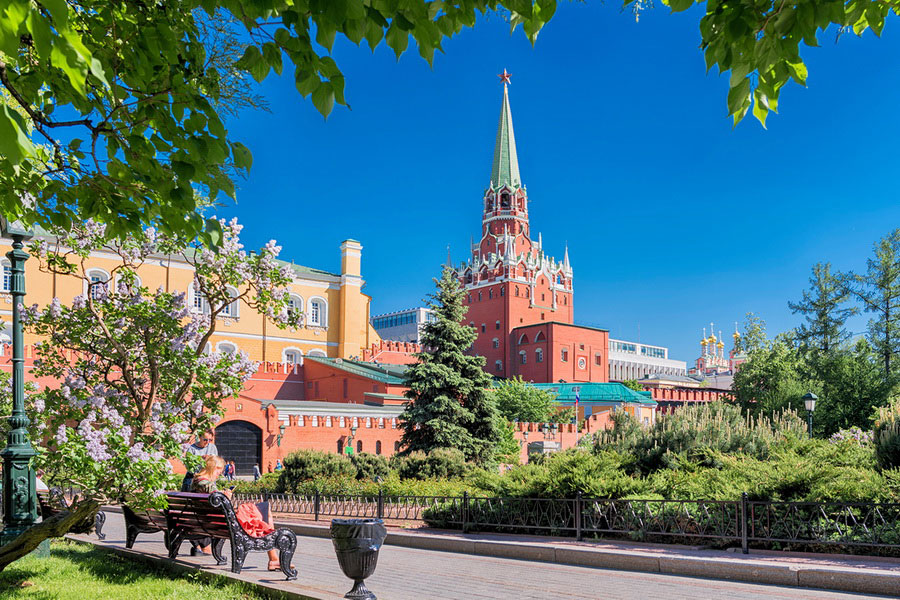 Located along the northwestern wall of the Kremlin, over the river Neglinnaya locked into the steel tube, is Alexander Garden, planted in 1820-1821 by the order of the Emperor Alexander I of Russia.

This beautiful green oasis with walkways, flower gardens and monuments is one of the favorite places for Muscovites and the capital visitors. The paradox is that there, in the very heart of Moscow, you won’t feel the hustle and bustle of the city, just silence and coolness.

The Alexander Garden is decorated with huge iron gate on small wheels opening the main entrance from the Kremlin passage and the Historical Museum. The fence poles are made in the form of bundles of twigs and crowned with the fasces, the Roman symbol of strength and unity reminding of the victory in the Patriotic War of 1812. The gate filled with the symbols of military triumph are facing the monument to the national hero, Marshal Zhukov, which is dedicated to the 50th anniversary of the Victory in World War II. It looks quite symbolical, since this is not the first place in Moscow, where the monuments of the two wars meet.

Even more famous is the Ruins grotto monument to the victory over Napoleon placed on the main square of the Alexander Garden. The wings of the grotto are lined with the debris of Moscow buildings destroyed by Napoleon's army.

The Alexander Garden has the tomb of the Unknown Soldier - one of the major war memorials of the city. The burial site is marked by the granite headstone with the sculptures of the laurel branch, the helmet and banner; in the center of the red star located on top of gravestones the eternal flame is burning.

Not far from the grotto you will see a unique monument of the 20th century - the tall obelisk with a pointed top, which appeared in the Alexander Garden in 1914.