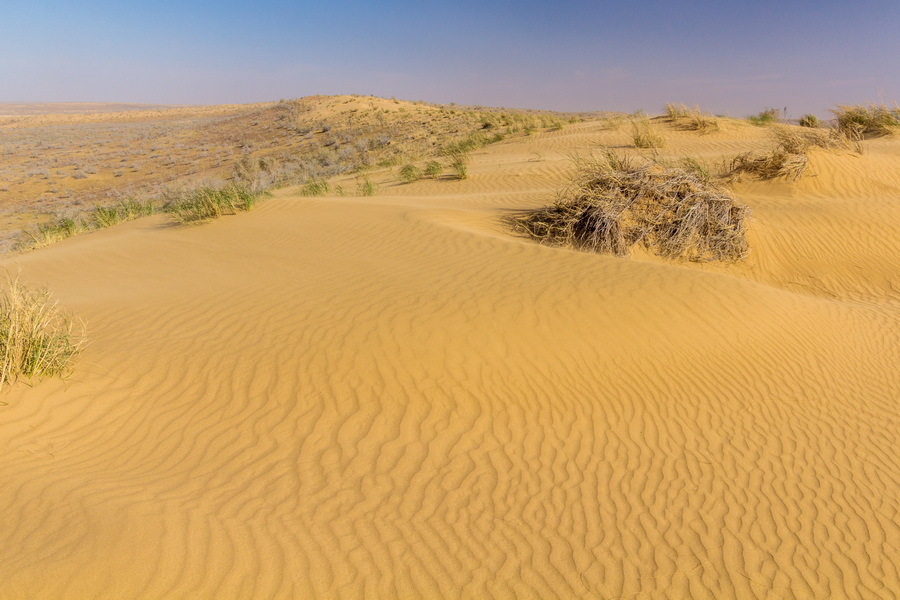 The Karakum is a sand desert stretching for 350,000 km2 from the Caspian Sea to Pamir foothills and from Amu Darya to Kopet Dag ridge. Its name is translated as “black sands” (“kara” - black, “kum” - sand). The dessert corresponds to its gloomy name, because some of its parts were previously completely waterless for hundreds of kilometers, and anyone who tried to cross it, found a terrible death under the scorching sun of Asia.

Structurally, the Karakum is a rugged plain with sand ridges and dunes connected with small salt marshes and takyrs. It is divided into the Zaunguz Karakum, located on a plateau, the Central Karakum, spread in the lowlands, and South-Eastern Karakum, gradually developing into the Kugitangtau foothills.

There is practically no surface water in the form of oases, but large volumes of groundwater, hidden beneath the sands, has a discharge through dug wells. Besides, the desert is crossed by the huge Karakum Canal, which takes water from the Amu Darya and carries it away almost for 1,000 km to the desert. In addition, in the south, there are several rivers flowing down from the mountains and dissolving in the sands.

The Karakum climate is very severe. Summer temperature can reach +50°С, while the soil can run hot as high as +80°С. Winter features strong frosts up to -30°С. Rainfall is very scanty, and precipitates mainly in November and April.

Flora is represented by the sand sedge, acacia, saksaul, and in spring, by grasses and flowers which cover huge areas, except for dunes, and completely dry up by May. Fauna of the Karakum desert includes gazelles, foxes, wolves, various rodents, lizards, snakes and insects. Besides the wildlife, grassland farming to raise sheep and camels is also common there.