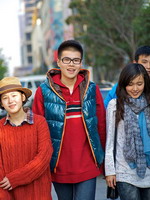 Every year on 4 May China celebrates Youth Day. This holiday is officially a day-off and is part of the so-called “golden week”, when the whole China celebrates May holidays for 7 days. Youth Day as a public holiday has been celebrated since 1949.

Youth Day is a national holiday of political nature. It is associated with an important historic event in the development of Chinese democracy. It was May 4, 1919 when young people began mass demonstrations which became a kind of trigger to start the national liberation movement in China.

The students’ mass demonstrations were caused by the decisions on the territories formerly belonging to the German Empire, adopted at the Versailles Peace Conference. The Chinese Shandong peninsula was transferred to Japan, and that was the reason for the revolts to begin. Nearly 3,000 students went out to the streets to defend the integrity and sovereignty of China. Those famous demonstrations resulted in significant concessions on the part of Beijing authorities and the dismissal of several ministers from their posts.

Today, 4 May is one of the most significant dates, widely celebrated by the Chinese people. This day public celebrations, various performances are taking place, articles and reports dedicated to the festival are printed in newspapers. Annual youth rallies usually held this day obtained widespread circulation in the country. Year after year, thousands of Chinese university students are taking part in the grandiose parades and rallies, dedicated to the commemorative events of 1919.