In 1987 Aksu-Dzhabagly, the oldest reserve of Central Asia and Kazakhstan, marked its 60th anniversary.

Inimitable is the nature of these unique mountains, situated in the Western Tien-Shan at 1000 to 4280 above the sea level.

The main high-altitude zones are represented here in their whole splendor: semi deserts change into dry steppes which turn into the forests of treelike juniper.

Luxuriant meadows in dry valleys give place to thick brushwood's of creeping junipers. The variegated mosaic of multy-coloured Alpine flowers adorns the foots of rigorous peaks with dazzling snow and bluish tongues of «hanging» glaciers.

Aksu-Dzhabagly is a richest treasury of rare, endangered and endemic species of animals and plants. Here occur mountain rams and goats, marals and roes, lynxes and snow leopards, wolves and foxes, bears and porcupines, mountain martyrs and ermines. In the preserve's nearest surroundings lives the Menzbier's marmot.

Rich is the world of birds. High in the sky soar bearded vultures, griffons and golden eagles. On the stony slopes are building their nests mountain partridges, near the everlasting snows one can meet enigmatic snowcocks. In the shodows of leaf-bearing forests the feathering of the paradise flycatcher blazes up like a living flame.

The singing of the whistling Thrush reminds of the flute's ringing sounds. Over sunny glades flash beautifuly-coloured butterflies, among them rare species of Apollo butterflies.

Diverse is the reserve's plant kingdom. The small stony tree (Celtis caucasica) is known for its striking strength. A richest source of essential oils are the plants of Amarantus grandifolia. Like red flames are blazing on mountain slopes the Greig's tulips. Into pinkish floscules are gathered the airy flowers of Morina Kokanica. 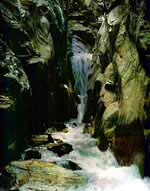 Picturesque and whimsical are the reserve's landscapes. Original terraces of meadows and sttepes change into high rocky mountains cut by narrow gorges with overhanging stone eaves. Impetuons rivers are flowing in deep canyons changing abruptly into thundering waterfalls. The fathomless blue of of the sky reflects in the mirror-like surface of icy mountain lakes.

In an almost inaccessible depression at 3000 m over the sea level is an original «picture-gallery» consisting of a great number of pictures carved on dark shimming stones. They depict wild and domestic animals, scenes of hunting and life of ancient men.

In shale deposits at palaeontological sites of the Aksu-Dzhabagly are well preserved petrified imprints of the planets inhabitants – plants, fishes, insects, and pangolins.