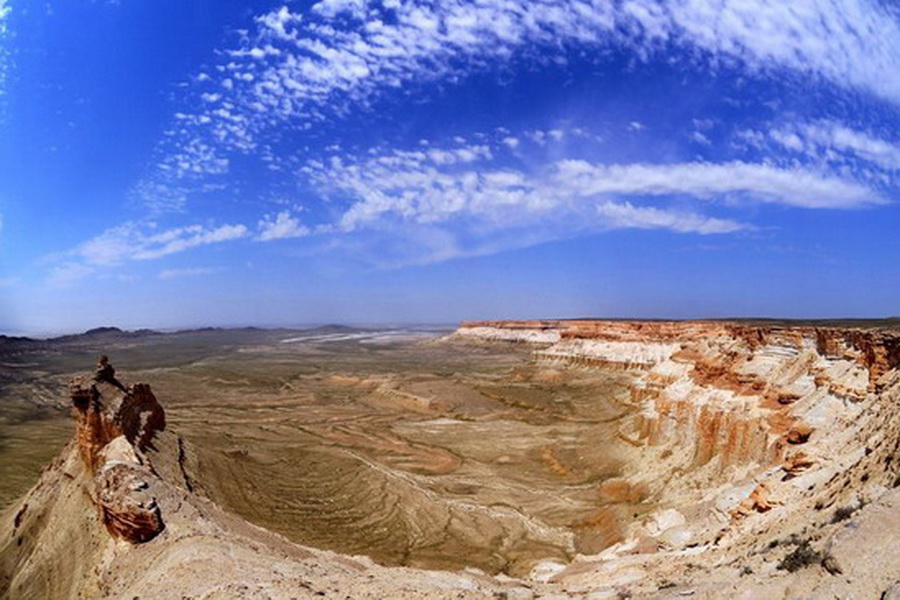 The Ustyurt Reserve is situated in the West of Kazakhstan in the territory of one of the most remarkable localities of the West of Central Asia – the Ustyurt Plateau. The total area of the reserve is 223,300 ha. The Ustyurt Reserve was founded on 12 July 1984 with the purpose to preserve the plateau northern deserts as well as preserve rare fauna and flora species there.

One of the places of interest of the reserve is a chink – an Ustyurt plateau steep edge which consists of limestone and chalk. Among the chalk rocks there are a lot of samples of marine sediments proving a scientific theory once more that there was a sea in the Ustyurt plateau territory in the past. The chink itself also represents a great interest, thus its pillars which can be as high as several hundred meters are iridescent with different colors from pale pink and blue to dazzling white.

The landscapes in the reserve are very diverse: horizonless steppes and deserts with numerous depressions, where riverbeds of the ancient defunct rivers can be traced. The huge Kenderlisor depression is stretching from the south-west to the north-east of the reserve. The depression bottom lies below sea level. And it is there where one can watch the most incredible combinations of figures built up of chink. There are depressions with a lot of niches and systems of caves. Another famous drainless depression in the Ustyurt plateau – Barsa-Kelmes occupies the area of nearly 2,000 square kilometers.

Besides the natural places of interest the historical monuments in the Ustyurt reserve are also protected. The Ustyurt plateau was crossed with caravan trade routes in the Middle Ages. Before the XV century the cities were prospering there. When the Amu Darya riverbed got dried many of them thinned out in course of time, and nowadays the ancient ruins only remind us that once there existed life. Among the most famous historical monuments of the reserve there are ancient ruins of Shakhr-i-Vazir city, Beleuli caravansarai, Allan fortress as well as numerous mazars and mausoleums, many of which are still left unstudied. In addition to them there are dozens of Neolithic main sites.

The flora of the reserve is not as rich as that of the Ustyurt plateau, the reserve is mainly a desert honey-combed with cracks where sometimes small 2-m outliers of ancient chalky rocks occur. Typical plants for such locality are the cactus, grey sage, feather grass, anabasis-salsa, saltwort, etc., a rare species of plants such as brushwood of Asiatic poplar also grows in this territory. The southern Ustyurt features with takyrs with more variable vegetation.

The reserve’s fauna is represented with various species of snakes and lizards among them there are rare species of geckos that live only in the Ustyurt. Among birds, predators are mainly predominant: the vultures, harrier eagles, saker falcons, and also golden eagles, imperial eagles and steppe eagles.