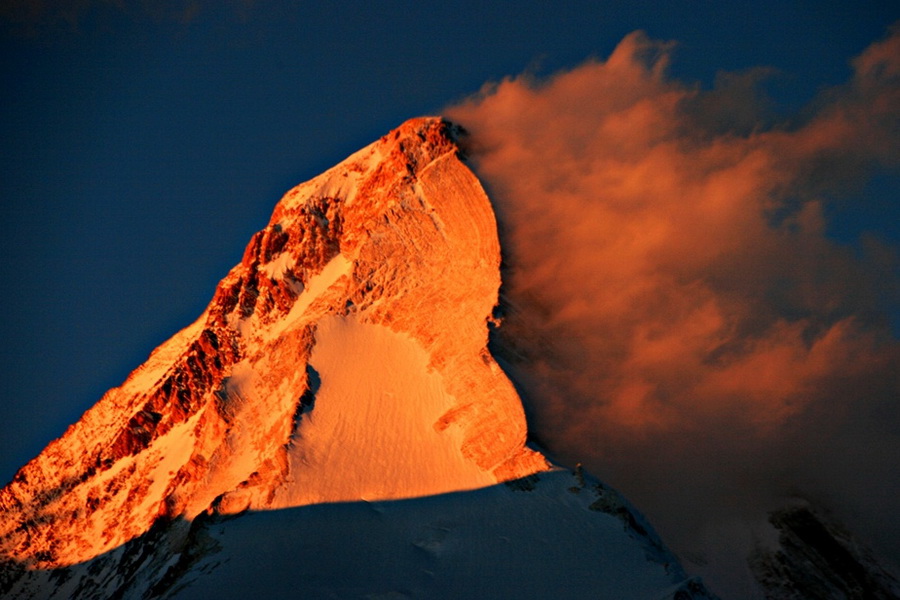 "Lord of the Sky" was the name given by the ancient Turks to one of the highest peaks of the Tien-Shan – Khan-Tengri. It is situated on the border of Kazakhstan and Kirgizia and reaches the height of 7,000m. Over thousands of years this peak was holy for the ancient Turks and even now it is associated with many legends and beliefs. Another its name is Kantau (“Blood Mountain”). The mountain received its name due the pink granite covering the peak.   During the sunset it is getting a reddish tincture.

The Turk-Mongolian tribes before adoption of the Islam professed their pagan religion – the Tengrianism. The Supreme God of this religion was God Tengri who determined a human fate and its lifetime. The ancient Turks believed that their Supreme God could only live at the peak of the world. Such peak for them was Khan-Tengri.

The Khan-Tengri peak was described in many travelers’ articles, but it was explored for the first time by P.P. Semyenov Tien-Sahnsky, the famous Russian geographer of the XIX century.  He described the peak as an aiquille of regular pyramid shape. In the opinion of many modern alpinists Khan-Tengri is the most beautiful peak in the world due to its nearly ideal right geometric form.

The first mount to the peak was made by Mikhail Pogrebitsky, Boris Tyurin and Franz Zauberer in 1931. Pogrebitsky described a sunset in Khan-Tengi in his memoirs “… Khan-Tegri was blazing from above like a giant faceted ruby set in the dark turquoise sky…”

To day, the alpinists from all over the world gather in training camps on the glaciers of Northern Enylchek (Kazakhstan) and Southern Enylchek (Kyrgyzstan) to train for the mount to Khan-Tengri. Up to now 25 mounting routes have been laid.

The peak Khan-Tengri is considered to be one of the most hard-to-reach ones in the world. Not without reason the ancient Turks called it “The Lord of the Sky”. From point of view of its severe grandeur and arduous feature, it can only be compared with famous 8,000m- Himalayas, that is why KhanTengri is a trail of courage and craft for the alpinists from all over the world.