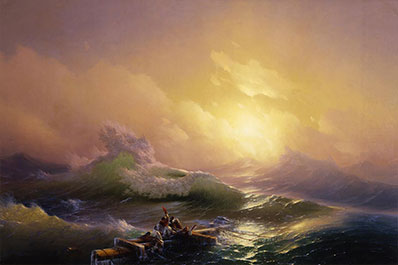 Ivan Konstantinovich Aivazovsky (1817-1900) was an outstanding marine painter known for his depictions of the ocean, maritime battles and the courage of sailors battling the elements at sea.

Appointed as the Russian Navy’s foremost artist, his favorite themes included stormy skies and waves pierced by the sun’s rays. Aivazovsky’s "The Ninth Wave" (1850) acquired textbook fame as a vivid example of the master's unsurpassed professionalism and is his most well-recognized painting today.

Ivan Aivazovsky’s paintings and techniques led him to extensive international travels, yet he remained connected to his hometown of Theodosia on the Black Sea coast, where he founded an art studio in 1865. An ethnic Armenian who studied and lived in Russia for many years, Ivan Konstantinovich Aivazovsky remains popular in both nations even today.