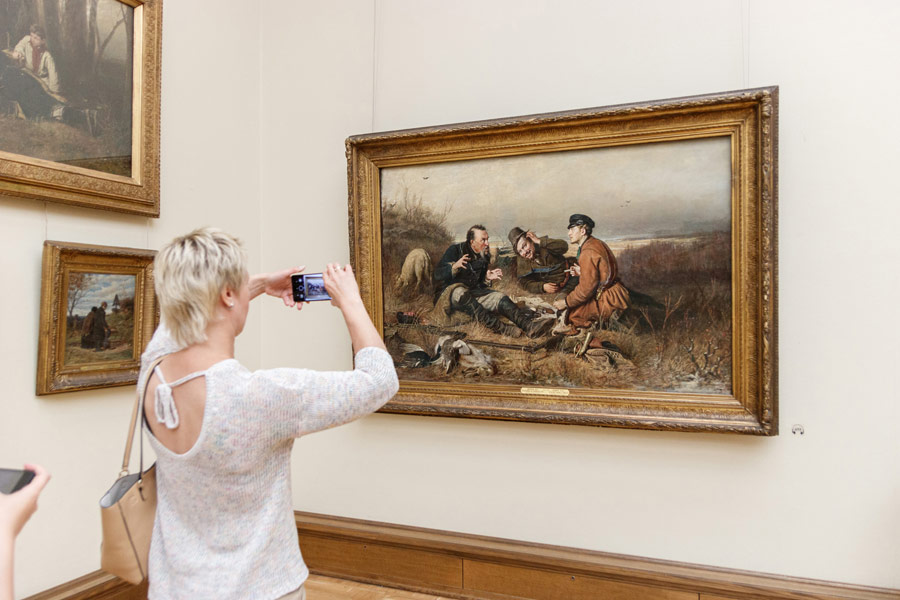 Byzantian painting tradition penetrated Russia together with Christianity and temple architecture: the churches were decorated with mosaic and murals. Temple painting was distinguished by spirituality and stringent canonicity. Expressive imagery was needed to express the idea of spirituality over flesh. Another innovation was the icons (Greek eikon – image), presenting Jesus Christ, the Mother of God and the saints. The icons replaced wooden idols symbolizing pagan gods.

Russian painting reached its heights in the 14th – 15th centuries. It was the period of icon painting connected with the names of the greatest masters: Theophanes the Greek, Andrey Rublev and Dionysius.

After Peter I the Great had opened the door to Europe, Russia was influenced by the Western art schools. Russian painters mastered the technical achievement of the Westerns masters: they used new materials as well (canvas, oil paints, marble). The art of painting received the unseen variety of images and theme. Apparently, the most interesting area of decorative arts was portrait painting. Landscape was to follow later. In the early 20th century it was not just nature images but the painting conveying the subtlest movements of a human’s soul by means of nature images. The greatest landscape painters in Russia were A. Savrassov and I. Shishkin. The realistic painting of the 19th century was represented by Ilya Repin and Vasily Surikov. 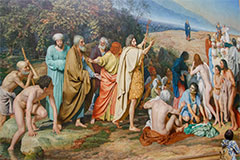 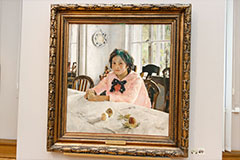 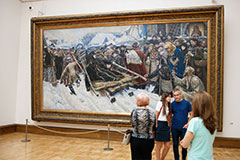 The early 20th century was the time of Russian modernism formation with its vast variety of trends and styles: fauvism, futurism, cubism, suprematism and so on. Modernism was characterized by negation of traditional arts. The new trend considered itself to be in the forefront of art development of art - avant-garde. The most prominent avant-garde representatives were the father of abstract art Vasily Kandinsky, Marc Chagall, Kazimir Malevich, the founder of suprematism – artistic trend which evolved the idea of objectless abstract painting to its logical conclusion. The most-known Malevitch’s piece – “The Black Square” (1913) was the ideological manifesto of suprematism.

Achievements of Russian art schools have been recognized universally. The paintings of Russian artists both living in the past century and our contemporaries, the works of sculptors, the splendid specimens of Russian applied art are honored by all the major museums of the world.