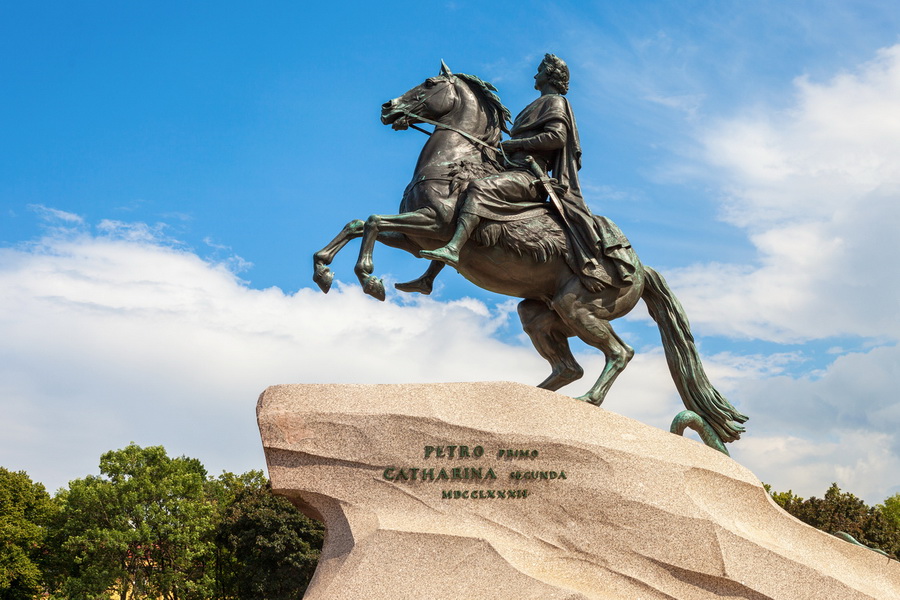 Bronze Horseman. An equestrian statue of Peter the Great in Saint Petersburg

Throughout history, the development of Russian sculptures has closely coincided with the development of the country as a whole, and today these historic monuments serve as a reflection of the sociopolitical climate of the nation at the time of each statue’s construction.

Sculpting has long been regarded as a costly and tedious art form, which in Russia began to take shape only in the 18th century. The primary sponsor of its many gifted sculptors was often the government itself, who regarded Russian monuments as a means of inspiring the population and instilling faith in the collective power of citizens to resist the enemy and cling to a shared national heritage.

Sculptures in the Russian Empire

Significant strides in the development of Russian sculptures began in response to the reforms of Peter the Great at the turn of the 18th century. Many foreign architects and international sculptors were regularly invited to work in the Russian Empire during this time, the most famous of whom was Bartolomeo Carlo Rastrelli. Particularly renowned for his portrait-busts, Rastrelli’s most acclaimed work is his bust of Peter the Great, now on display in The Hermitage Museum in St. Petersburg. Among the great Russian sculptors of this era was Ivan Zarudny, the mastermind behind the iconostasis at Peter and Paul Cathedral.

During the era of classicism under the reign of Catherine II, the art of sculpting reached a new level as sculptures were designed to interact closely with the surrounding architecture and were fashioned into a variety of styles whose popularity waxed and waned. The art of Russian sculpting experienced another upswing when the Imperial Academy of Arts was founded in 1757 by General Ivan Shuvalov. The largest institute of its kind in the country, the academy trained an astonishing number of respected sculptors, including Fedot Shubin, Fedor Gordeev, Mikhail Kozlovsky, Ivan Martos and Feodosiy Shchedrin. The contribution of these artists to the diversity of statues and monuments in Moscow, St. Petersburg and beyond cannot be underestimated.

The creation of pre-revolutionary Russian sculptures reached its zenith in the latter half of the 19th century. Noted for their distinct use of decoration, historicism and eclecticism which was typically exemplified in a concise, simplistic manner, Russia’s plethora of pre-revolutionary sculptures are clearly distinguishable, if not redundant.

The early 20th century was marked by the arrival of Western Art Nouveau and the so-called neo-Russian style, two trends which greatly impacted the style of statues in Russia. The creative search of many Russian sculptors from this era enabled them to design true masterpieces of every size and variety.

Sculptures in the USSR

After the 1917 Russian Revolution and the rise to power of the Soviet regime, a rigorous propaganda plan devised by Lenin was implemented throughout the land, and Russian monuments from this era duly reflect this ideology. Statues from the Soviet era were almost exclusively political. The sculptors often used pioneering techniques in the creation of their works, and while in one sense this was a form of creative expression, it was also born from a necessity to adapt to the shoddy materials with which the artists were forced to work. Perhaps for this reason, relatively few Soviet sculptures have survived to our day, and most which have are statues and busts of Vladimir Lenin.

During the reigns of Stalin and Brezhnev, the creative expression typically reflected in sculptures was replaced by the canons of socialist realism, which with time led to the production of mediocre works and to the creation of many lookalike monuments which are now indicative of 20th-century Russian sculptures.

Since the collapse of the USSR, Russian sculptures continue to diversify in form, style and genre even as statues from previous eras are actively preserved and valued for their historic significance. Some of the most widely known modern sculptors in Russia are Zurab Tsereteli, Igor Burganov, Vyacheslav Klykov, Salavat Shcherbakov, Mikhail Shemyakin and Alexander Rukavishnikov. New Russian statues continue to be developed as a testament to future generations of 21st-century Russian culture.