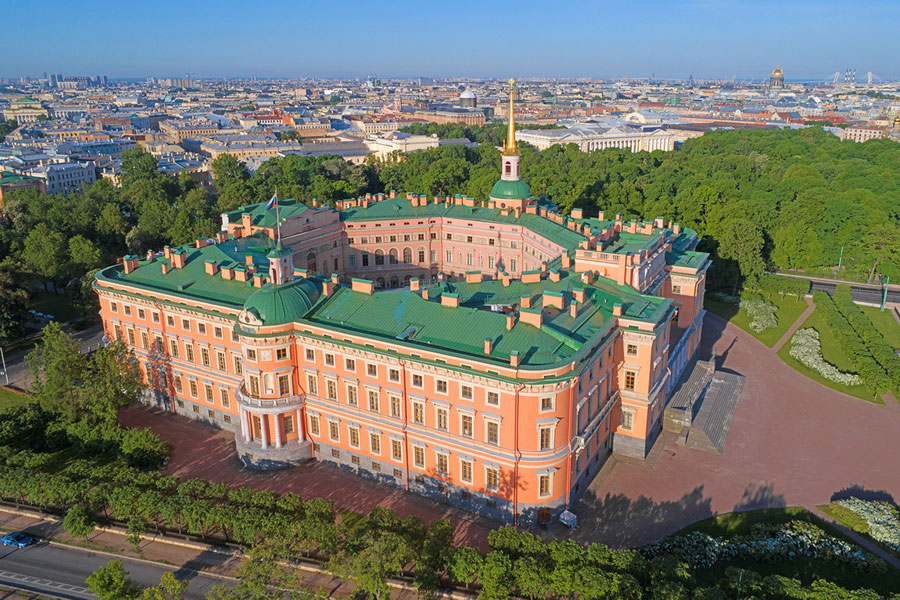 St. Michael's Castle has a reputation of the most mysterious and enigmatic structure in the city on Neva. This may be due to the fact that its host, the Emperor Paul I, was inclined to mysticism. In the palace of his mother, Catherine II, he thought he was haunted by conspiracies and enemies. Therefore, immediately after the Empress’ death Paul I started building the palace of his own. The construction of the St. Michael’s Castle was started in 1797. The impatient Emperor rushed the architects as much as he could, the works went on around the clock, seven days a week. As the result, the wonderful castle was built in three years.

The new palace the new Russian Emperor was not like any other royal residences - eclectic Winter Palace or the small estate at Gatchina. Paul’s palace combined features of a medieval castle and secular European palace.

The huge structure is amazing in its dark power and severe restraint. The four facades of St Michael's Castle are decorated in different ways. Toward the Garden Street protrudes the facade of the palace church. It is topped with a typical Petersburg spire. Facing Moika is the northern facade with an open terrace supported by a marble colonnade and a wide staircase decorated with statues of Hercules and Flora. The front southern facade with a solemn parade of columns is pronouncedly monumental. The castle was painted orange, which was rather original for the time.

Like many other palaces of the epoch, the castle combines the functions of the main residence of the Imperial Family and the museum's collection. The enfilade of front galleries was located along the perimeter of the courtyard and was filled with masterpieces of art from the collection of Paul I.

The impregnable fortress served his master not for long. On the night of March 11, 1801 Paul I was assassinated by conspirators in his own bedroom. It should be mentioned that the St. Michael’s Castle was constructed on the site of the summer palace of Elizabeth, where Paul I was born in 1754.

After the murder of Paul I, the castle became even more popular, but unfortunately, in a very sad way. Those who ever lived or studied in the castle used to say that they repeatedly faced the ghost of Czar Paul. So the palace received its other name - «The Haunted House».

From 1819 the St. Michael’s Castle housed the Main Engineering School which gave the castle its second name - Engineering. In 1991 the building was handed over to the Russian Museum. After extensive reconstruction works the castle and the adjacent territory acquired their original look. The bronze monument to Peter I by Rastrelli is standing in front of the St. Michael’s Castle.