Tajikistan on the Silk Road

The territory of Tajikistan from the most ancient times lay on the important historical routes of the Silk Road connecting the East and the West. It was very important in international trade and cultural exchange linking Bactria, Tokharistan, Soghd, Istaravshan and Fergana with India, Afghanistan and China.

The Silk Road helped not only to exchange goods between the East and the West, but also ideas, cultures and people. Very famous along the entire Silk Road were the weapons made by Soghd craftsmen. Very popular were leather products and jewelry, silk fabrics and colored salts. Soghd exported amazing “golden peaches”, white and yellow cherries, sheep and graceful swift-footed racers.

According to ancient sources there were the following sectors of the Silk Road which crossed Tajikistan.
Soghd route went from Samarkand to Kokand through Pendzhikent and further on the road leading to Fergana valley through Varz, Ura-Tyube, Khujand, Konibodom, and Isfara.

The other route sometimes called “Karotegin” connected Termez and Kashgar (China) through Hissar and Dushanbe.

Khatlon route branched from Karogetin to the south and led from Dushanbe to Balkh (Afghanistan) up to the southern Silk Road line.

The route called “Pamir” led from Balkh (Afghanistan) to Khorog and was further split into other routes.
Despite the complexity of the high-mountain relief the lands of modern Tajikistan in antiquity and the Middle Ages served as the bridge between peoples and civilizations. Unlike steppe routes the mountain lines were safer for caravans: they passed in valleys framed by mountain ridges that served as reliable protection them from attacks of robbers.

Tadjik cities on the Silk Road are precious pearls framed by picturesque landscapes. Among them are Pendzhikent, Ura-Tyube, and Khujand. More the 20 centuries ago those cities were famous for their crafts, culture and well- developed trade. The ancient roads were traveled by numerous caravans, which stopped in caravanserais and exchanged the brought goods in Oriental markets. In this connection it is possible to find the elements of the most different legends, rituals, and religions in the culture and crafts of Tajikistan. 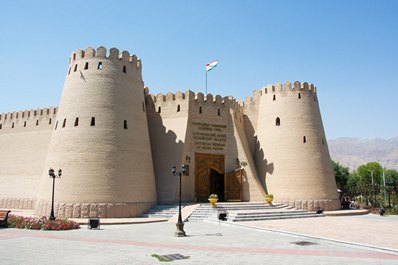 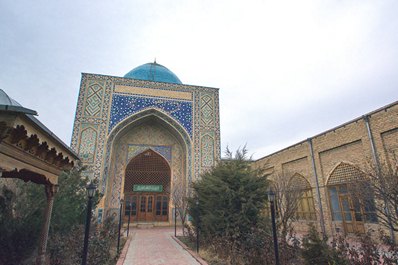 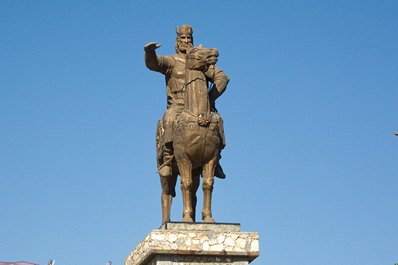 Penjikent, the oldest city of Tajikistan (more than 5,500 years old) is located in the picturesque valley of the Zeravshan River (near Samarkand). The beauty and fertility of those lands were the reason of appearance of small settlements and later - the city which prospered in the 5th -8th centuries. Beautiful, well-fortified civilized city was one of the most important cultural and crafts centers of Soghd. It was even called the Central Asian Pompey. The palace of the governor, round which temples, markets, rich houses of townspeople decorated with numerous ornaments and wooden and clay sculptures of ancient gods, was the city’s jewel. Pendzhikent was the last city on the way from Samarkand to the mountains of Kukhistan. It was very convenient since any caravan, any person descending from the mountains to Samarkand and coming back could not bypass Pendzhikent. Soghd controlled a part of the Silk Road, but after the empire’s collapse, caused by Arabian conquerors in the 8th century, people had to escape to the mountains.

The ruins of this ancient wee accidentally found in the past century. The ruins of apartment houses and office buildings, the citadel with palace, the house of handicraftsmen, the church of fire worshippers have survived there.

The ancient settlement of Pendzhikent is located in the southeast suburb of the modern Tadjik city of the same name.

The jewel of Tajikistan, ancient Ura-Tyube, once was a major trade center on the crossroads of historical caravan routes, the city of Oriental markets, weavers and handicraftsmen.

Located in the north of Tajikistan, in foothills of the Turkestan Ridge, the city celebrated its 2,500th birthday. It was founded in the 6th century B.C. by Cyrus, the Achaemenid king. It was the time when it was named Cyropolis or Kurushkada. By then, when Alexander the Great had conquered Central Asia (the 4th century BC), Kurushkada was already a big, well-fortified city. Only by cunning did Greek soldiers manage to walk along the dry-out channel of the river and open the gate. The city was destroyed by the order of Alexander the Great.

At various times this beautiful and ancient city was named differently. For example, in the Middle Ages it was known as Bundzhikat, the capital of Ustrushan.  In the days of Arabian sovereignty Ura-Tyube became a province of Arabian caliphate. At that time Islamic architectural structures such as mosques, madrasahs, mausoleums, minarets etc. started to appear. The city’s most rapid development took place under the rule of the first Tadjik Samanid dynasty (9th – 10th centuries). But in the 13th century the city was destroyed again by the armies of Genghis-Khan.

However, Ura-Tyube rose from the ashes in the 14th – 15th centuries with the coming of powerful Timurid Empire. In that period the city was called Ura-Tyube.

In the 16th century Transoxiana (together with Ura-Tyube) lost its significance as a result of emergence of the new Shaybanid state with the capital in Bukhara.

In the 18th century Ura-Tyube developed again as the center of the independent feudal state. It was the time when the citadel and fortifications were reinforced, old and the new structures restored, and new fortifications capable of stopping the attacks of numerous nomad tribes erected. In 1886 Ura-Tyube became a part of Russia.

The city has numerous monuments - mosques, mausoleums, and madrasahs. I the vicinities of Ura-Tyube there are rich archaeological finds such as the ancient city of Shakhristan.

This city located in the picturesque valley of the Syr-Darya is over 2,500 years old. It was first mentioned in Aristotle's works. During its 2,500-year history the city was repeatedly revived after numerous disastrous conquests.

From ancient times standing on the crossroads of well-known trade routes between the East and the West made Khujand one of the major economic and cultural centers of Central Asia, the major center on the Silk Road. The products from silk, jewelry made by craftsmen of Khujand were known not only in the East. The names of the city districts speak of the former significance of those crafts: Zargaron (jewelers), Pilakashon (silk-winders), Sangburon (masons), etc.

The history of Khujand began more than 2,500 years ago. It had already existed before the arrival of armies of Alexander the Great to the banks of the Syr-Darya.

Khujand is a picturesque Oriental city where old and new mingle in architectural styles, the customs and clothes of its people. The amazing citadel- the mausoleum of sheikh Muslekheddin, the mosque and minarets of the 15th – 18th centuries, Oriental market and other historical monuments attract numerous tourists.