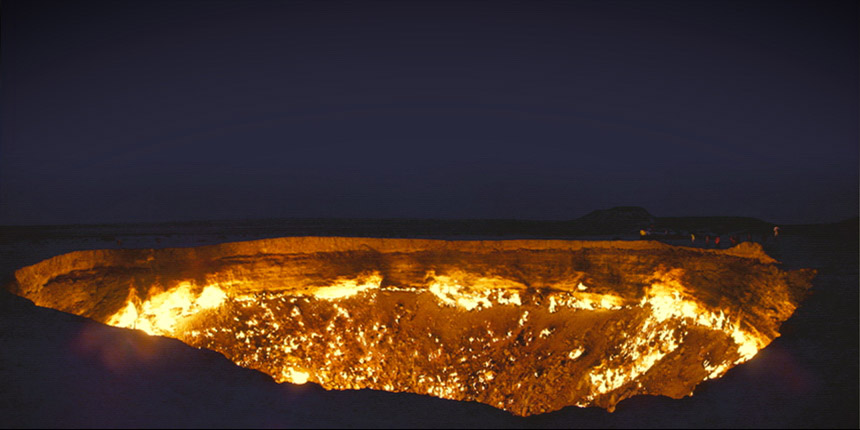 Darvaza Gas Crater - the Natural Wonder of the Karakum

There are many photos and videos on the internet of ‘Door to hell’ (also known as the Gate to Hell, the Crater of Fire, Darvaza/ Darwaza /Derweze) Crater), where you can watch fire erupting in the middle of the desert. The view of the flame burning in the desert is bewitching and intriguing. But not many have an idea how this wonder appeared, located in 266km to the north of Ashgabat city.

In 1971 in the Karakum desert, not far from the Darvaza village (also known as Derweze) that is translated from Turkmen as ‘gate’, Soviet geologists started to drill at the site where they tapped into a cavern filled with natural gas. During the drilling an accident happened, equipment and transport fell down in a big hole. No one was injured, but there was gas coming out of the hole. Fearing that the hole would lead to the release of poisonous gases, the team decided to burn it off. It was hoped that the fire would use all the fuel within few days, but weeks, months and years passed, and it is still burning today. In 2004 Turkmenistan President Gurbanguly Berdimukhamedov issued an order for the Darvaza village to be moved to another place for safety reasons. No one know how long it will still be burning, whether the gas supplies will run out or will the hole will be closed in the end as gas is a valuable resource and it is not burning idle for a few decades. Nevertheless, this natural gas fire remains one of the most enigmatic attractions of Turkmenistan attracting numerous tourists every year. 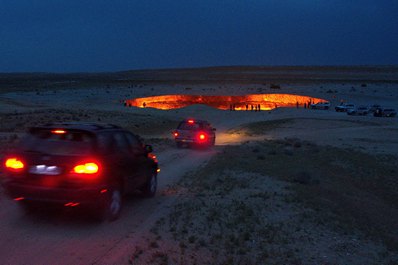 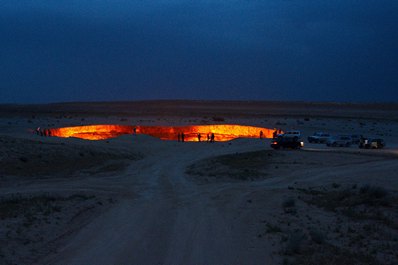 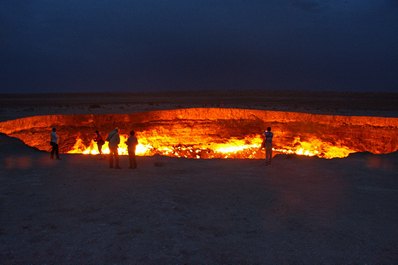 If you drive up the gas crater during the daytime, it will not impress much and seem a hole in the ground, but when you come closer you will see thousands of fire pieces burning in the 20-meter crater. Gas comes out of the hole and inflames more making the hot air even hotter. Tours to Darvaza crater are organized for the evening time, so you will enjoy a fascinating view of the sunset that slowly opens up vividly burning flames of the crater. There are few other holes around the crater, one of them is filled with turquoise liquid. These holes are recommended to watch in the daytime and cautiously as they crumble on the edges and one can feel the high temperature as well as the smell of the natural gas. 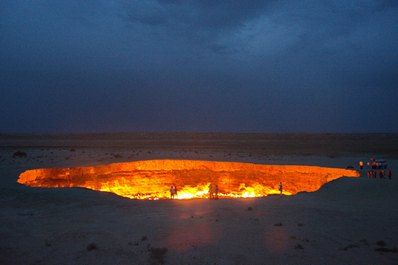 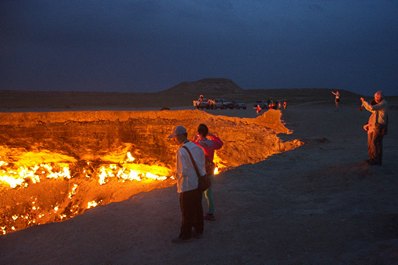 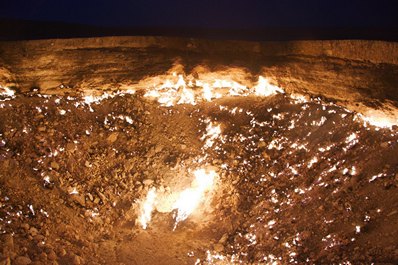 Natural gas crater Darvaza differs from many other natural attractions in the world, mainly with its peace and primitiveness. There are no parking places, hotels and shop souvenirs around, only a few tents and yurt camps.

The only place to eat is in the yurt camp (if you are staying there) or a few kilometers from the crater, on the south. The nearest shops are in the village of Erbent that is 90 km from the crater. It is also important to know that when planning a trip to the sight, one needs to make it with an off-road vehicle as although the main road leading to the crater is in good condition, the last few hundred meters lie through the sandy road. 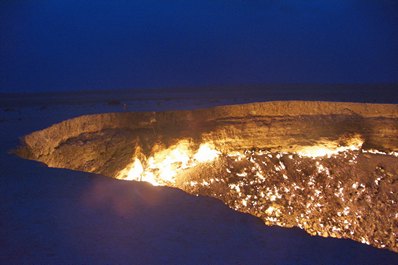 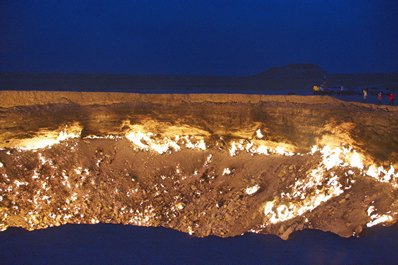 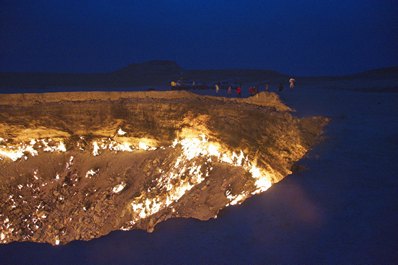