Simultaneously with the development of Sufism in Islam, as far back as at its first stage there sprung out Sufi mansions - specific cultic architecture so-called “khanqas” (from Persian – khané – a house) where pilgrims (Sufis, Calenders, Dervishes) could find shelter and food, administer Sufi ceremonials, read prayers, hold disputes and sometimes teaching. The term “khanaqa” was characteristic for many religious sects, trends and heretical sects well before Islam. 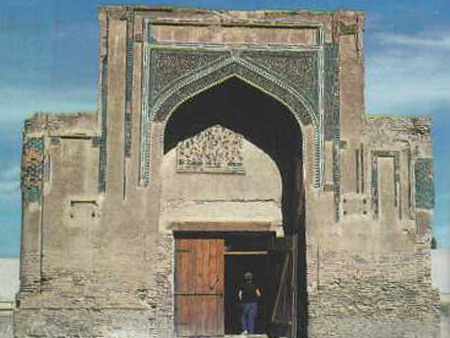 At the very first stage a sheikh’s house was used as a khanaqah where Sufis were gathering. The early khanaqhs (X-XIII centuries) were built in the places remote from city and vanity fair, it was required by the khanaqah status itself and adequate for the activity of the Sufi sects and community to be carried out, but due to an increasing authority and role of Sufism in a social life, the function of khanaqahs, their architectural appearance and location places were changed. In the XV- XVII centuries the khanaqahs were built of portal-domed type and mainly in cities.

In the XV-XVII centuries, as judged by the survived monuments of Bukhara, Samarkand, Termez, Tashkent and other cities, the khanaqah was not already a house to receive pilgrims though there still was a sheikh with an attending staff at the khanaqah, but a place for religious cultic practice.

Khanaqa in the age of Timur and post-Temurid period served mainly for Sufi rejoicing, intellectual and general cultural meetings, reception of guests from other cities and countries. Such khanaqas characteristic for the period of the Sufi palmy days in Central Asia (XIV-XVII centuries) were built in cities or suburbs, at the tombs of famous medieval saints. The examples of it may be a mansion for pilgrims at “mashad” of Kusama ibn Abbas in Shakhi Zinda in Samarkand, khanaqah of Ulugbek in Samarkand, khanaqah of Hussein Baikora in Herat, khanaqah of Mir Alisher Navoi in Herat suburb.

Due to an increase of a spiritual role of Bukhara in this city and its community, a great number of portal-domed khanaqas (the Bakhauddin Nakshbandi khanaqah in Bakhauddin village Yunus khan khanaqah of the XV century in Tashkent, khanaqah of the XV century at Khakim at-Termizi Mausoleum in Termez, Sheikh Mukhtar Vali khanaqah in Khorezm and others) were built in other political and cultural centers of Central Asia. In the period of XIV-XV centuries, especially in XIV-XVII centuries in Bukhara, Samarkand and Tashkent and other cities and suburbs there were erected large portal-domed structures often in a complex with madrasahs and monumental tombs exampled by the Muhammad Sultan khanaqa in the Gur Emir complex.

In the XVIII-XIX centuries there sprung out country-khanaqas with a patio (khanaqas-madrasahs of Caliph Khudaidot, several khanaqahs in a Bukhara oasis in Kermine district) often without a plan rigid structure and not as a separate building. In such a complex- khanaqah a saint’s tomb and a detached mosque were a mandatory.

Erection of memorial monuments at worshipped tombs including imaginary ones is an ancient tradition of the Eurasian peoples coming from the depths of unrecorded time. Establishment of empty cenotaphs, building up of mounds without real depositions by semi-nomadic and nomadic Eurasian peoples is a habit observed in many places of pre-Arab Central Asia. 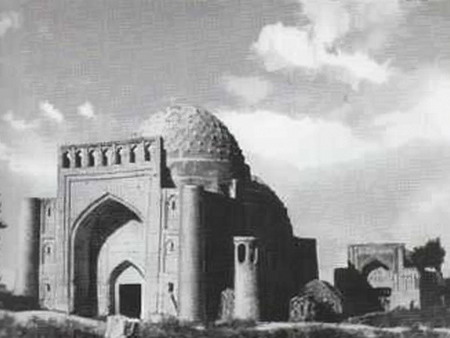 Special dissemination of the mashads occurred after the Arab conquests. In the course of enduring fight for belief, the Islamic history saw a lot of martyr-saints esteemed over the vast territory of the Muslim world. The Muslim East knows a good few religious burials of saints which were not connected with a real person or the place of his deposition. Moving sanctuaries and establishment of dummy tombs in different places was a phenomenon widely popular not only for Islam, but also for other regions and beliefs. Such holy places were called by Arab word –“mashad”.

Cultic memorial complexes were erected at many mashads (mashad of Kussam ibn Abbas, Shakhi Zinda, mausoleum-khanaqah of Khoja - mashad in the South of Tajikistan) in Central Asia. The word “mashad” expresses an idea that the saint whose deposition was worshipped in a certain place in reality buried in another place, but this saint appeared before a sheikh and named him a place of his hagiolatry. That is why there are many twins in the world of saints. The tombs of one of the same persons may be met in different places of Islamic countries and they continue to be an object of worship and pilgrimage up to present. There existed a distinct difference between understanding “kabr” (or turba) i.e. a saint real tomb and “mashad” – a place of fictitious burial.