Things to Do in Uzbekistan 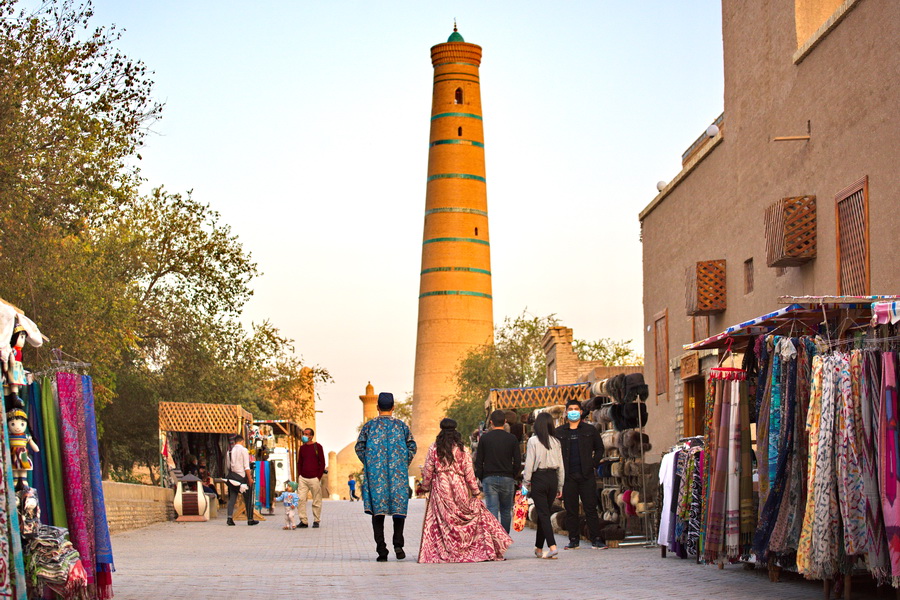 Top Things to Do and See in Uzbekistan

Uzbekistan has been a melting pot of cultures, customs and languages for centuries, and this rich past remains palpable today among its intact medieval cities, colorful handicrafts and hospitable people. According to international experts, there are more than 4,000 historical and architectural monuments of international significance in Uzbekistan. Add to this natural beauty, tasty cuisine, quality handmade gifts and the soothing intonations of Uzbekistan’s languages and you’ll understand that a lifetime isn’t enough to explore this place!

If you are wondering where to begin, why not start with some of the activities on our list of Top 10 things to do in Uzbekistan: 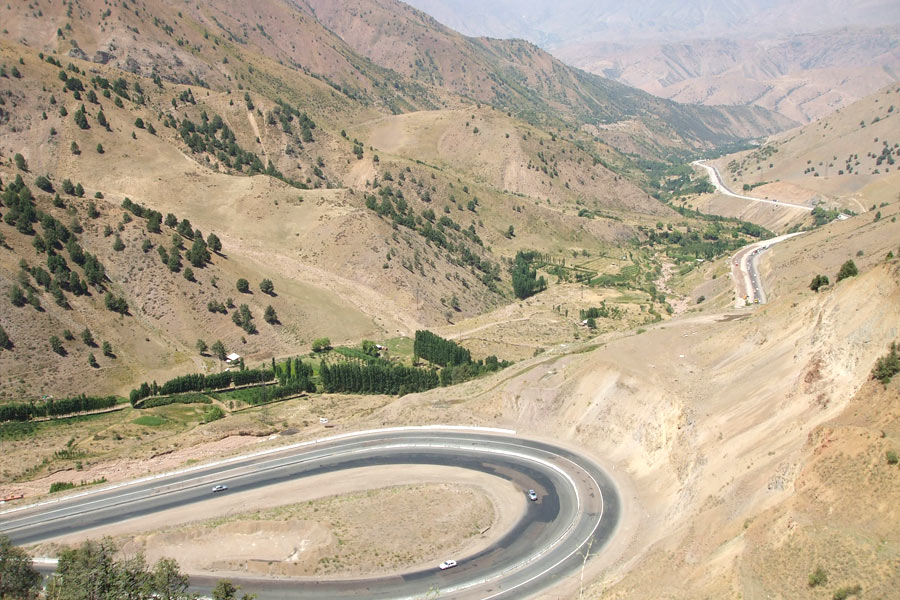 The history of the Silk Road began with Chinese emperors who came to the Fergana Valley in search of its famous horses. Spread across three countries, the Fergana Valley is a land of skilled potters, master woodcarvers and expert weavers whose skills were passed down through generations. Among the many things to do in Fergana Valley, we recommend visiting the Palace of Khudayar Khan, learning about the region’s famous silk carpets and sharp knives (pichak), and touring the fragrant vineyards before trying some crisp, fresh bread and rich pilaf made from a special regional rice. While there, be sure to take the time to enjoy a warm welcome from the people of Fergana Valley! 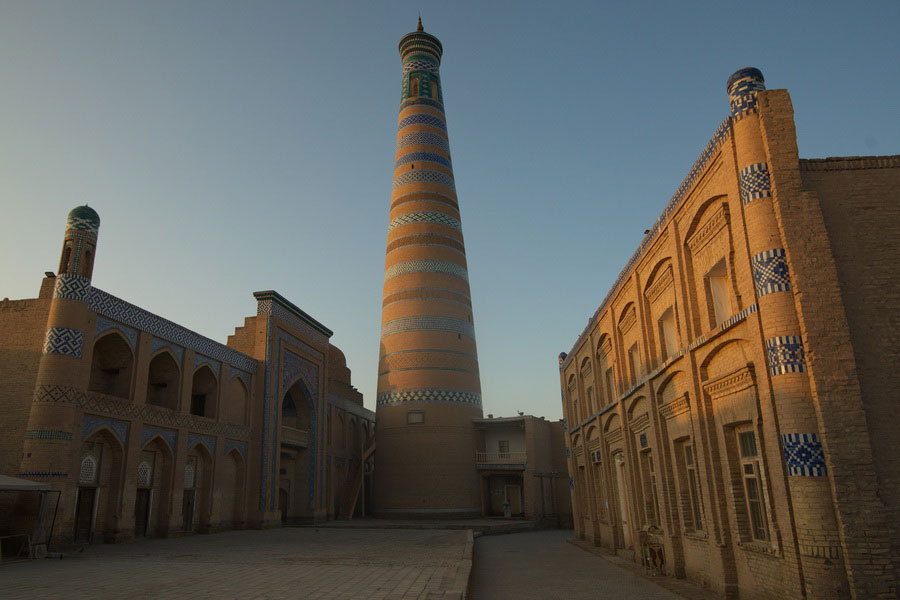 Khiva is a city unlike any other in Central Asia, with some of the most spectacular architectural monuments in the region. The walled inner city of Itchan-Kala has not changed in over a century, and within its walls is Islam Hodja Complex, named after a local ruler who built a hospital, pharmacy, post office, telegraph station and public school. The complex includes a mosque, madrasah and the tallest minaret in Khiva which is now a city symbol. The stairs to the top are narrow and steep, but those who make it are rewarded with a spectacular view of the city from a height of 45 meters (150 feet).

3. Ask for luck from Hodja Nasreddin in Bukhara 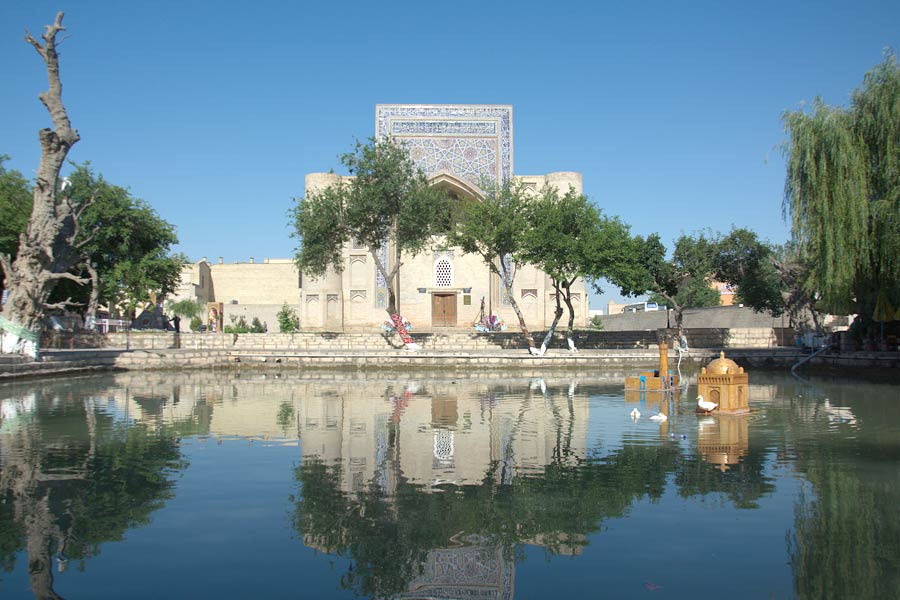 Uzbekistan is famous for its historic cities, and Bukhara is one of the most beloved of all. From the landmark Ark Fortress to the stately Kalyan Minaret - so beautiful that even Genghis Khan didn’t dare destroy it – holy sites around the city are covered in skillful brickwork and exquisite tiles. One of the most serene spots in all Bukhara is the Lyabi-Hauz Complex, where madrasahs and a shelter for Sufi mystics surround a small but famous pond. Be sure to stop at the statue of Nasreddin Hodja, a famous storyteller and satirist who is rumored to bring luck in business and love if you rub his right shoe. 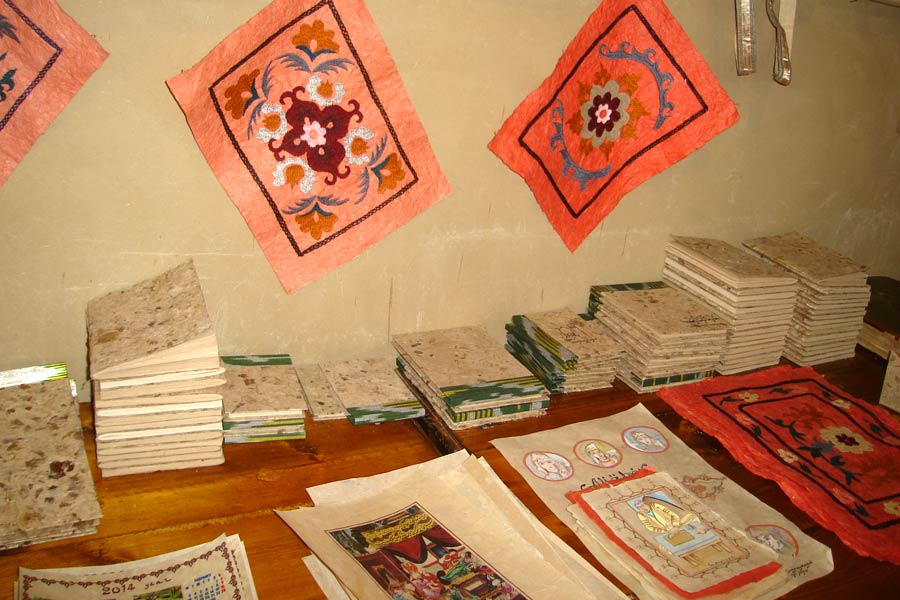 Among the many historic things to do in Uzbekistan, touring Samarkand certainly tops the list. After visiting the city’s major sites such as Registan Square and Gur-e-Amir Mausoleum, a trip to Konigil village outside Samarkand will uncover a whole new aspect of local culture. In Konigil, the Mukhtarov brothers provide workshops for creating paper from mulberry leaves according to local methods perfected over the centuries. Thanks to its durable nature, mulberry paper has been used for manuscripts for as long as Samarkand has served as a spiritual and intellectual center. While there are plenty of things to do in Samarkand itself, the history and techniques taught at the mulberry paper workshop are a clear reminder that behind each of the city’s monuments is a long history of science and craftsmanship. The experience is made complete with the unique mulberry paper souvenirs available on site.

5. Spend a night in the Kyzylkum Desert 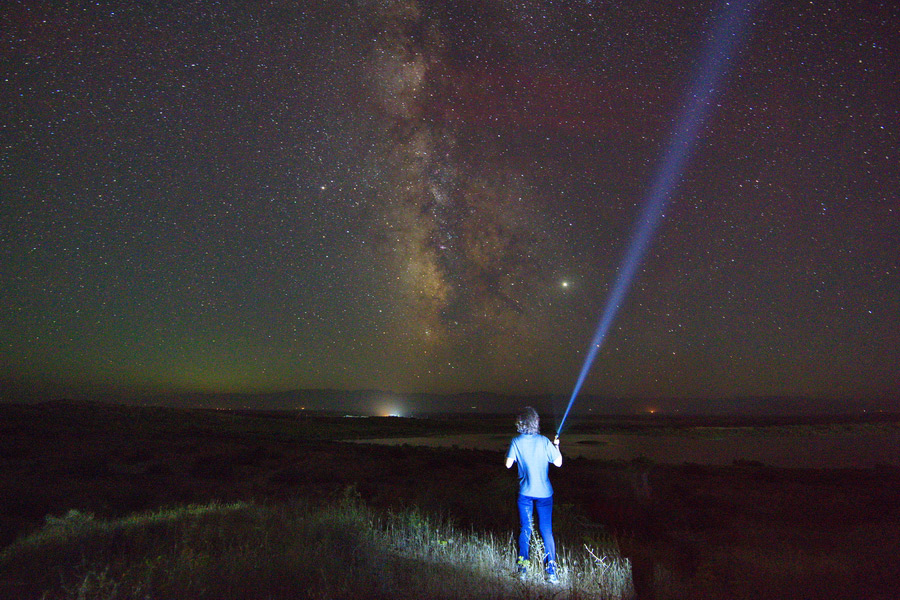 As much as we love the cities of Uzbekistan, sometimes you just need to step away from civilization! On a trip to the Nurata Mountains and Aydarkul Lake in the Kyzylkum Desert, you’ll exchange concrete for Stone Age petroglyphs and Wi-Fi for the glimmering Milky Way. Surrounded by sand, yurts and camels, you can relax under the broad sky as you enjoy traditional food cooked over the fire. Although Aydarkul Lake is relatively new (formed in 1969), it is now an integral part of the environment, and even the flamingos stop by on their migrations! Take a walk on Uzbekistan’s wild side with a trip so unique and rewarding you may not want to leave.

6. Experience the beauty of Sufism 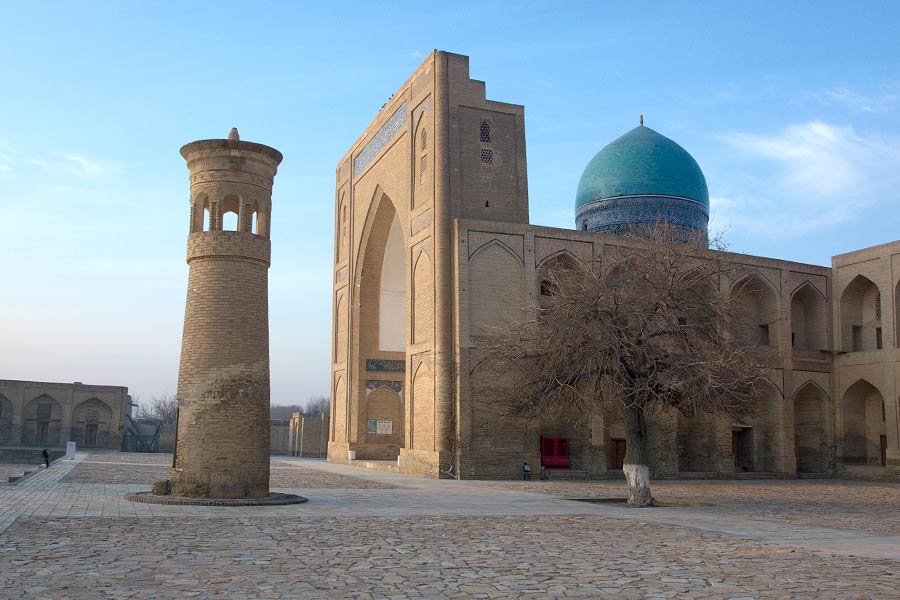 Many of Uzbekistan’s traditions are closely intertwined with its long religious past, which often fascinates travelers regardless of their own faith. There are a large number of sites throughout the country that speak to the importance of Buddhism, Christianity, Judaism, Islam and Zoroastrianism and the contributions that local scholars have made to each religion. While tours to Bukhara usually visit many religious sites, the most highly revered is Mausoleum of Bahauddin Naqshbandi, founder of an important Sufi order. When in Tashkent, be sure to stop at Khast-Imam Square, which holds one of the oldest Qurans in the world for which Uzbekistan is famous. Other sites such as Samarkand’s Registan Square and Shahi-Zinda have their own stories to tell to those who take time to enjoy a serene moment within their walls.

7. Discover the hidden art of Savitsky 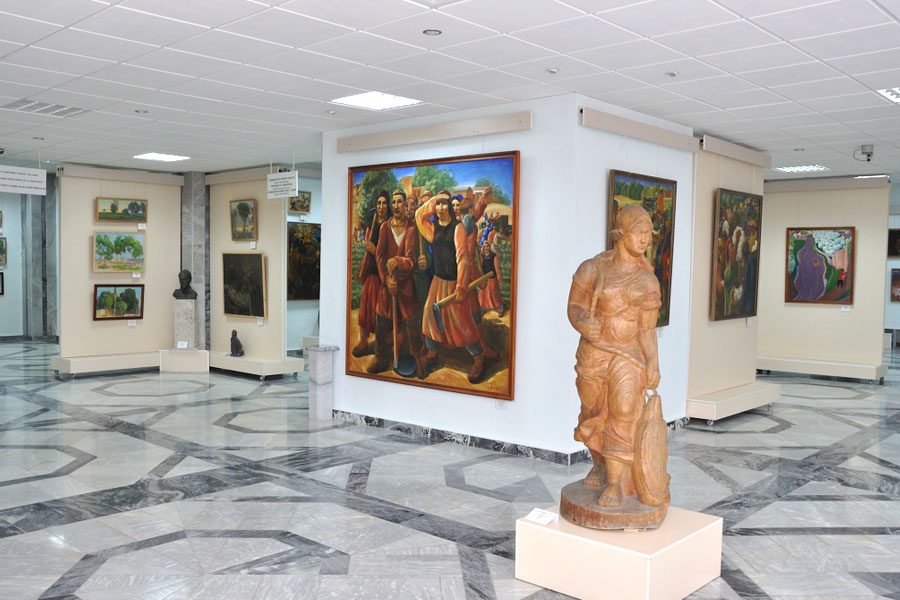 An extraordinary and underrated museum can be found in Nukus, the capital of Karakalpakstan Region. The museum was founded by Igor Savitsky, an artist and archaeologist who spent 30 years in the region. He began by amassing jewelry, clothing and other traditional Karakalpak items, eventually opening a museum in the 1960s. Savitsky then proceeded to fill his fledgling museum with paintings by well-known but banned avant-garde Soviet painters. The Savitsky Museum* became famous only after the death of its founder in 1984, and today it is one of the most unusual and important museums in Central Asia and beyond. It’s well worth a trip all the way out to Nukus just to spend a day wandering its halls, where you can learn the history of the Karakalpak people, view their art and discover lesser-known painters of the Soviet era. A visit to Savitsky museum truly completes a trip to Uzbekistan and can be easily combined with excursions to the Aral Sea or the Desert Castles of Khorezm.

*Due to renovations at Savitsky Museum, the archeological and applied arts exhibitions remain closed indefinitely.

8. Uncover the secrets of an ancient Buddhist center 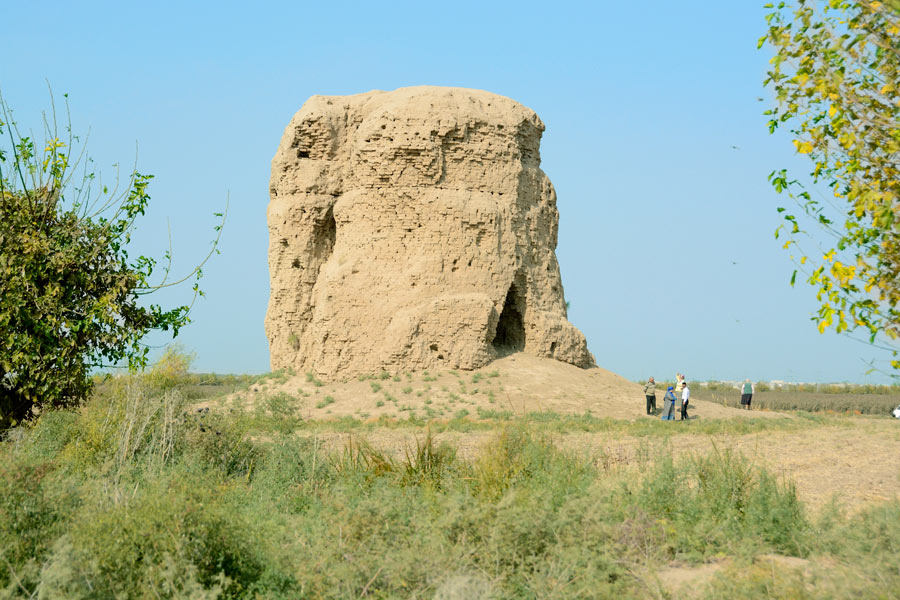 Buddhism played a crucial role in the development of Termez, the southernmost city in Uzbekistan. From the 1st-7th centuries, Buddhism coexisted in the area alongside Zoroastrianism and Manichaeism. Fayaz-Tepa near Termez is home to remarkably well-preserved frescoes and statues, while Kara-Tepa includes several temples decorated with ancient images and inscriptions. But perhaps the most monumental relic of Buddhism is Zurmala, a lone column and all that remains of a 10th-century stupa. Traveling to Termez is among the more unusual things to do in Uzbekistan, as it is visited by few tourists compared to Samarkand and Bukhara, yet it is an ideal place to add greater depth to your understanding of Uzbekistan’s historic diversity.

9. Stand on the bottom of the Aral Sea 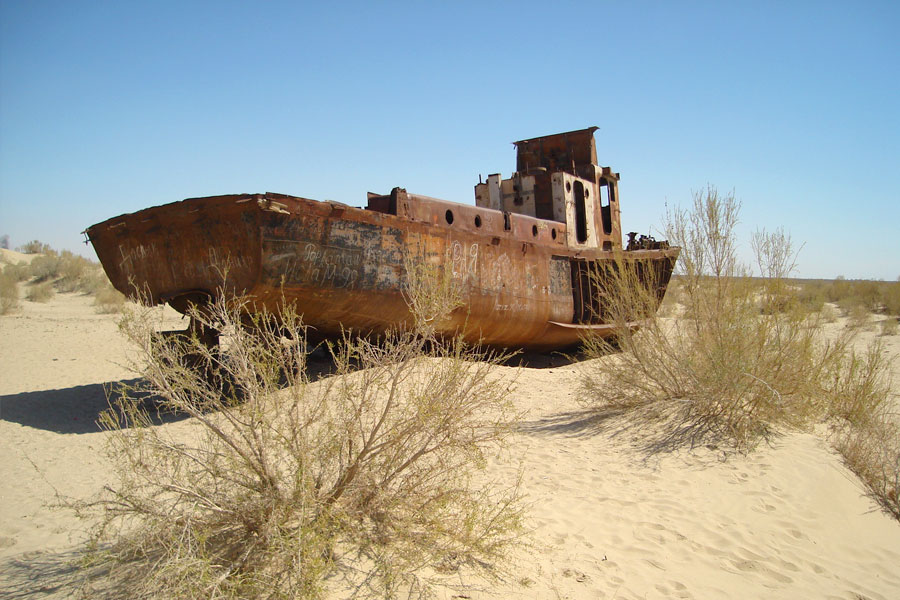 The Aral Sea is certainly one of the more unusual sightseeing places of Uzbekistan. Just 50 years ago, the region was a rich ecosystem complete with wetlands, expansive lakes and fishing villages. Yet after decades of utilizing irrigation canals to divert the rivers that once funneled into the Aral Sea, today it is all but depleted at less than 10% of its original size. The forlorn Aralkum Desert now covers an area where ships once sailed, and today the port city of Muynak sits hundreds of kilometers from the water’s edge, with a haunting ship graveyard the most lurid reminder of its past. As you traverse these unearthly landscapes on an Aral Sea tour, local guides will recount the region’s catastrophic history while voicing the peoples’ hopes for the future. 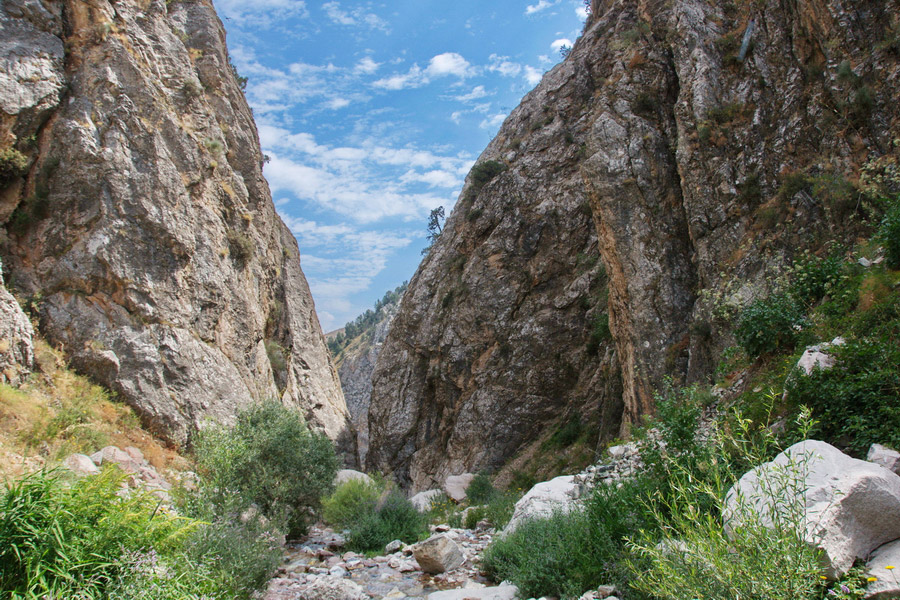 Not many capital cities can boast of crystal-clear streams running through mountain canyons, yet this is precisely what you will find near the bustling metropolis of Tashkent. Uzbekistan’s mountains may not rival the Himalayas or the Alps, yet their narrow, rocky canyons and broad alpine meadows impress with their beauty and diversity. After completing your list of things to do in Tashkent, travel just 1-2 hours outside of Tashkent on a trip to Gulkam Canyon in the Chimgan Mountains, where the Gulkamsay River winds its way around sheer cliffs and cascading waterfalls. A Gulkam Canyon excursion is the perfect way to add an extra dimension of adventure to your time in Uzbekistan and to step away from historic monuments for a relaxing afternoon.

The list of cultural and historic things to do in Uzbekistan could continue on indefinitely, but suffice it to say that the country offers something for nearly every travel style and taste. Choose your favorite activities from above or check out some of our 7-10 day Uzbekistan tour itineraries to come up with your own ‘Top 10’ List for this fascinating country.