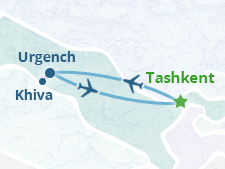 Two-Day tour to Khiva from Tashkent is an opportunity to experience the ethereal beauty and unique atmosphere of Khiva. The city itself is more than 2,500 years old, and was once one of the most important cities on the Silk Road, near the Khorezm Oasis. Today, Khiva is an open-air museum with winding streets, intricate tile decorations, and bustling city life. In only two days, you will get to know this charming little city and its history, explore its monuments, and get a taste for life on the Silk Road. Explore Ichan-Kala, the central fortress in Khiva, which holds the majority of the main sights and is a strikingly intact medieval city.

Expand All   Collapse All
Day 1: Tashkent – Urgench – Khiva
Transfer from the hotel in Tashkent to the domestic terminal of the airport. Morning flight to Urgench. Arrival in Urgench, transfer to the hotel in Khiva (30 km, 35 min.). Guided excursion in Khiva. Sightseeing of Ichan-Kala, a UNESCO World Heritage site. The places to visit in the Ichan-Kala: Alauddinkhan Mausoleum, Mukhammad Aminkhan Madrasah (XVIII century), Ak-Maszhid mosque, madrasah of Khoja Berdibiy, Shirgazikhan, Pakhlavan Makhmud Mausoleum, Minaret of Islam-Khoja, Juma Mosque (XVIII century), Tash-Khovli Palace, Allakulikhan Madrasah. Free time in the evening. Overnight at the hotel.
Day 2: Khiva – Urgench – Tashkent
Our guide and driver will meet you at your hotel in Khiva at 09:00. Trip to Kyzylkum Desert (150 km, 1,5-2 h) and visiting of archaeological monuments of Ancient Khorezm: you will visit Kyzyl-Kala - a unique monument of Ancient Khorezm architecture relevant to Kushan- Afrigid period of antique history, Toprak-Kala -ancient settlement which was the capital of Khorezm in the III century AD. Not without reason Toprak-Kala is called "the museum of fine arts of Ancient Khorezm". It is the only completely dug out monument of architecture of Khorezm. Its sizes and genius of architectural design make Toprak-Kala one of the most unique monuments of Khorezm. There is a legend that the ancient subterranean passage connects Toprak-Kala and Kyzyl-Kala. It is quite possible that Kyzyl-Kala carried out the protective functions. Then we’ll visit one of the largest fortresses of Ancient Khorezm – Ayaz-Kala, II century AD, relevant to the period of Kushan Empire prosperity. Ayaz- Kala was neither a city nor a settlement, it was a fortress complex where nearly 19 centuries ago boundary groups of Kushan dynasty settled down.
Transfer to Urgench airport by 18:00. Evening flight to Tashkent. Arrival in Tashkent and transfer to the hotel/private residence. End of the 2-day tour to Khiva from Tashkent.

1 person
620
2 persons
430
3 persons
395
Single supplement
40
Prices are for 2023 in US$ per person, with discounted prices for larger groups available on request.
Tour Request
Short Uzbekistan Tours (25)
All Uzbekistan Tours 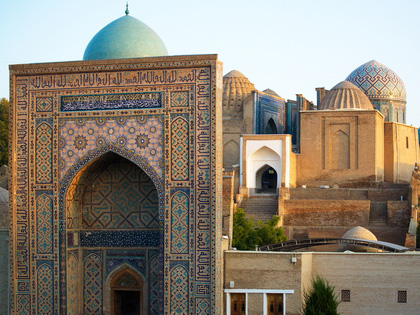 Two-day Bukhara & Samarkand Tour
2 Days | from US$ 330 / person
Bukhara, Samarkand
All year round 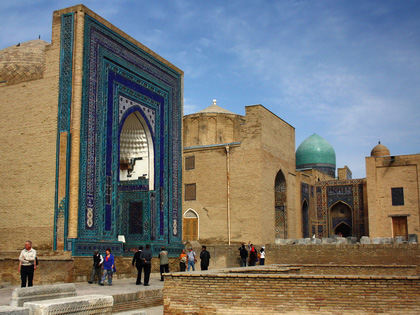 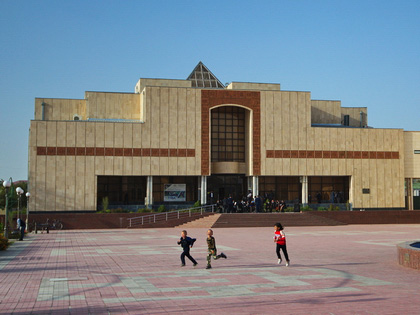 Nukus and Khiva Tour
2 Days | from US$ 155 / person
Nukus, Khiva, Urgench
All year round 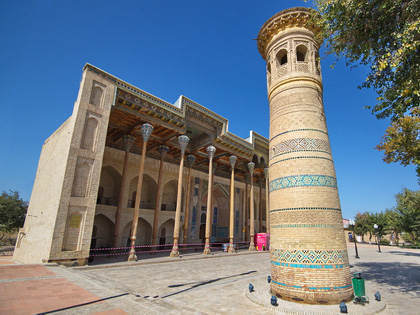 Best of Bukhara 3-Day Tour
3 Days | from US$ 460 / person
Bukhara, Gijduvan
All year round