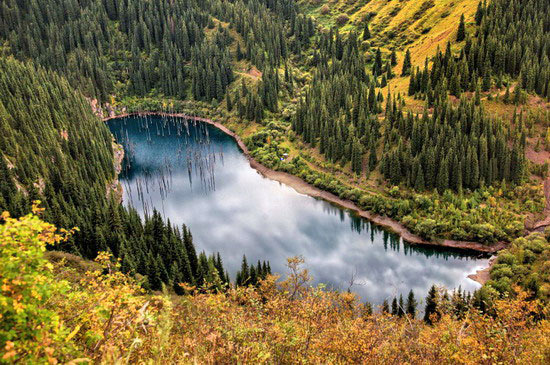 The land with poetic name Zhetysu (the Land of Seven Rivers) keeps many mysterious secrets. For centuries it had been the place where roads and historical fates of many tribes crossed. As the result, emerged the Great Silk Road, a large section of which ran through this land. At present, it represents the unique complex of historical, architectural, and town-planning memorials.

Historically, due to many reasons a great variety of unique sights formed in the territory of Almaty region, and its well-de veloped infrastructure made it possible to create comfortable tourist routes for nature-lovers. Only 60 km from Almaty, nearby a small town of Issyk, beautiful Lake Issyk is hidden in one of the picturesque gorges of the Zaili Alatau at a height of 1,800 m above sea level. On the 7th of July 1963 the lake was struck by a disastrous event - a powerful mudflow destroyed this magnifi cent lake. Currently Lake Issyk is being restored and will become a popular place for recreation and hiking in the near future.

Neighboring Lake Issyk is the splendid gorge of the Turgen River. It's one of the most beautiful and scenic gorges. Here you can enjoy picturesque nature and waterfalls, see famous Sacae bur ial-mounds dating back to 1000 ВС , and relic moss fur-groves growing on permafrost. Among the mountain ranges of the Jungar Alatau, the rivers Kora, Chizhe and Tekeli carry their clear waters and then, join ing, give birth to a new river - the Karatal.

The Kora river gorge is probably one of the most scenic in Semirechye (Land of Seven Rivers). The river rises high in the mountains, in the kingdom of eternal glaciers. Rough and relentless, squeezed between rocks, it carries its milky water. Burkhan-Bulak waterfall is the biggest in Semirechye. The height of its three layers comes to 90 m. Noisy stream containing tons of icy water rushes down sprin kling everything around with millions of splashes. 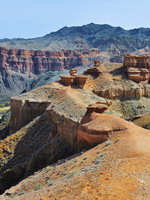 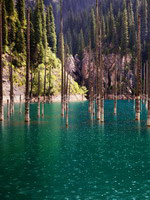 East of Almaty, 200 km down highway, there is the breathtaking Valley of Castles of the Charyn river. The Charyn Canyon is a long narrow gorge featuring steep sheer rocks with a rushing riv er flowing between them. Under the influence of winds and water the sand rocks assumed fanciful shapes reminding of exotic figures and fairy-tale characters. That is why the canyons are also called the Valley of Castles, the Devil's Gorge and the Ghosts Gorge.

The most scenic lakes in the mountain range of the Kungei Alatau are the Kolsai lakes. They consist of three lakes: the Low est, the Middle and the Upper Kolsai. Each lake has its unique charm. Surrounded by the mountain ridges, the Kolsai lakes, fa mous for their crystal blue waters, are a habitat for royal fish-rainbow trout.

The Kaindy lake is set in the Kungei Alatau, near the more famous Kolsai lakes. The unique nature of the Kaindy lake is in special charm and fresh beauty of this area. The gorge itself contains a manmade birch grove perfect ly fitting in the canifer landscape.

At the western spurs of the Jungar Alatau ridge there is the Altyn-Emel National Park, the biggest preserve in Kazakhstan. The area of 460,000 hectares is set for preservation of rare species of animals and plants. Here you can enjoy the view of unique colored mountains and the white mountains of Ak tau, the sand mountains of Katutau where fossils of mammals and dinosaurs are sometimes found. The Park accommodates several historical memorials - Skythian burial mounds of Bes-Shatyr dating back to the 1st millennium ВС and Tamgaly-Tas featuring over 4,000 ancient rock drawings, the earliest dating back to the 16-14 centuries ВС . Here, on the right bank of the Ili river, is Singing Barchan, which emits low organ-like sounds in sunny weather. While participating in safari, you can come across numerous animals inhabiting the Altyn-Emel Park: Siberian mountain goats - teles, Sand gazelles - jeirans, onagers (kulans), arkhars; such birds as berkut, borodach, mountain partridge - keklik, black- bellied hazel-grouse, sadj and many others, most of which are in the World and Kazakhstan Red Book.

Kazakhstan is the land of ancient civilizations. Since times immemorial its inhabitants have been creating outstanding and original culture. Today the admin istrative, cultural and industrial center of the region is Shymkent, the third largest city in Kazakhstan (420,000 people). South Kazakhstan Region is famous mostly for its historical memorials - burial mounds, sites of ancient settlements, for tresses, mausoleums and ancient towns.

Unique is the architecture and history of the ancient town of Turkestan (16-18th centuries), the political, trade and cultural center of the Kazakh khanate. The elegance and beauty of the Esim-khan mausoleums is striking, as is the complex of a Sufi advocate - Hodja Ahmed Yassaui (a town until the 16th c.) and sultan's Ondan.

The ancient town of Ispijab, now Sairam, located to the east of Shymkent, is famous for its mausoleums of Ibragim- Ata (17-20th centuries) and Karashash-Ana (17th c.) The Otrar National Archeological Museum-Preserve is locat ed here. It includes 12 medieval sites of ancient settlements.

Where semi-desert and the Kyzylkum desert meet, on the Kyzylkum river, the town of Arys is located. According to the latest archeological data, this area contains the classical sample objects of agricultural and cattle-breeding cultures of South Kazakhstan - the ancient settlement of Zhuantobe (the Arys river basin) and the Borizhar burial ground.

The beauty of the Western Tien-Shan

South Kazakhstan Region is rich not only in its historical memo rials but also in its unique and wonderful nature of the Western Tien-Shan. The Aksu-Dzhabagly Natural Preserve features unique archa forests, succulent alpine meadows, deep streams and rivers, and rigorous rocks in its territory of over 850 sq. km. Over 1,400 types of flower plants grow here. Many of them are included in the International Red Book. The preserve is the habitat for over 238 species of birds and 42 species of mammals, many of which are also close to extinction (Egyp tian vulture, berkut, black stork, blue bird, brown bear, arkhar, paradise flycatcher, snow leopard, Central Asian lynx and others.)

On the border of Kazakhstan, Kyrgyzstan and China there is the world famous peak of Khan-Tengri(7,014 m). Its dazzling beauty attracts not only climbers but also adventure-seekers. 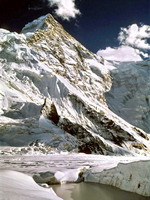 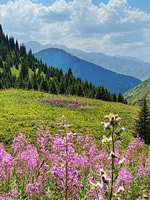 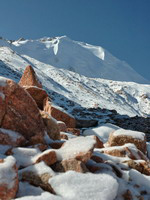 Among the natural treasures of the region remarkable for their unique beauty are the Burgulyk Gorge, lakes Kyzyl-kol and Balyktin fed by two powerful underground springs, the Akbiik karst cave with stalactite and stalagmite galleries extending towards the underground lake, the Kelte-Mashat Gorge - a 10-km long canyon featuring the unique natural attraction - the Crying Cave. The Karatau mountains themselves are one of the world's most interesting floristic regions.

Tyulkubas administrative area of South Kazakhstan attracts tourists with such activities as trekking, rafting, hunting, fishing, educational tourism, ornithological and folklore tours, horseback riding and others. On the banks of the Keles river there is the town of Sary-Agach, famous through Central Asia for its mineral springs, recreational zones and a balneal resort.