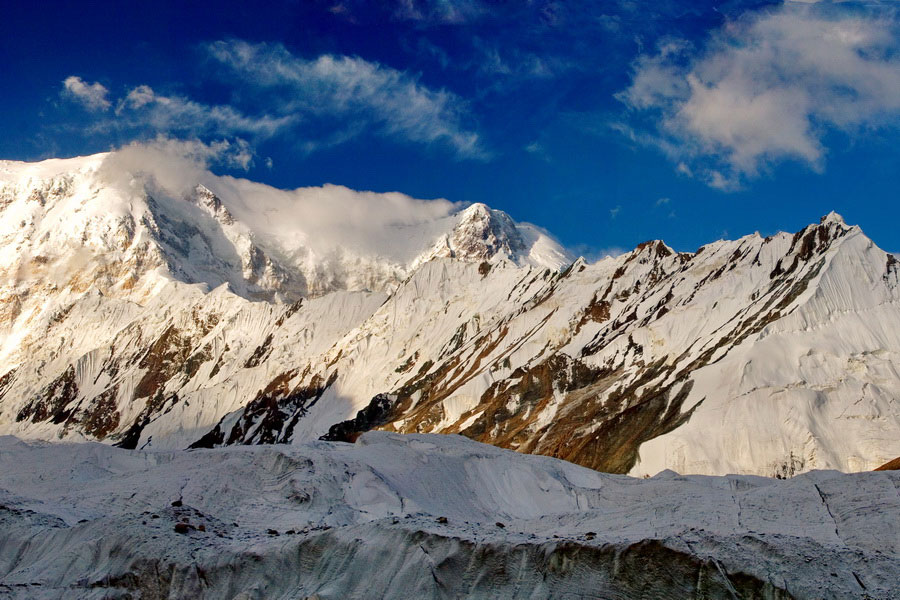 Pobeda Peak is found in Issyk-Kul Region, in the Kokshaal Range, astride the border with China. The official name in Chinese is Tomur Peak, while the Kyrgyz name is Jenish Chokusu. At 7,439 m (24,406 feet), it was the second tallest mountain in the Soviet Union and is the tallest mountain in Kyrgyzstan, and is the most northern 7,000 m (22,965 foot) mountain in the world. The southeastern slopes are in China, with the border running along the east-west ridges of the mountain and across the summit. The peak abuts the Zvezdochka Glacier and boasts a 3 km (9,843 feet) vertical headwall. Pobeda Peak has a long history of being confused with Khan Tengri, though some people think that both peaks were known as Khan Tengri to different groups at different times. The matter was settled in 1946 when Pobeda Peak was named after the victory in World War II (pobeda means victory in Russian).

The weather conditions can make ascent attempts difficult as cold winds, called thousand devils, blow from the Taklamakan Desert. According to some reports, the first ascent was in 1938 by a very surprised Soviet team - they thought the mountain was a lot smaller. They had used an airplane altimeter to measure the height, and had gotten misleading results. It was only later, after analysing reports from subsequent expeditions, that their achievement was recognized, though some still doubt that this first expedition did in fact summit Pobeda Peak. This first expedition was in honor of 20 years since the founding of the Komsomol, or the youth group of the Communist Party, and for some years the mountain was known as Peak of the 20th Anniversary of the Komsomol.

An expedition in 1943 was the first to accurately measure the height of Pobeda Peak, while a disastrous 1955 expedition led to the deaths of 11 climbers in a snow storm. Pobeda Peak was summited in 1977 from the Chinese side, and official Chinese records recognize this as the first ascent of the mountain. There are successful ascents most years, with most by teams from the CIS and Russia.