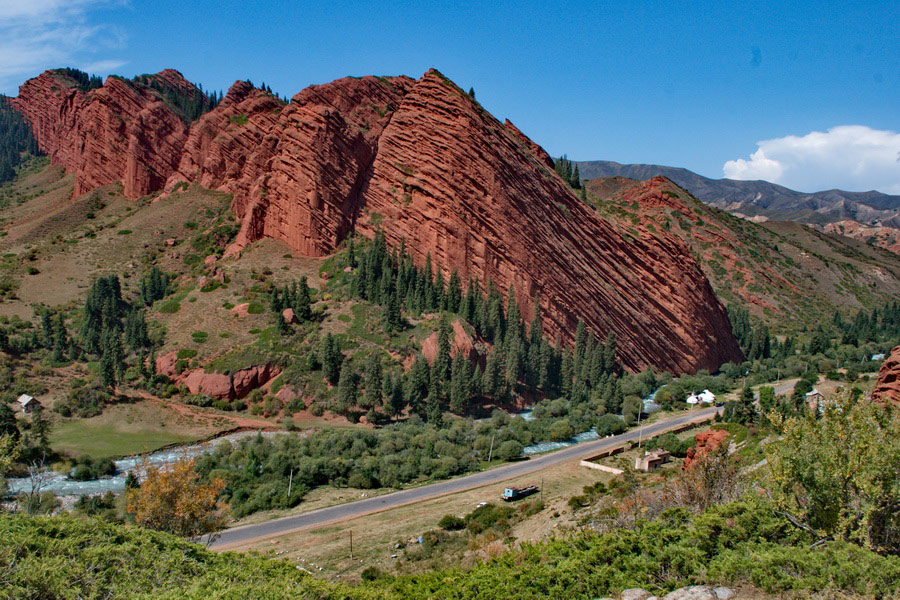 Jeti Oguz is a sandstone formation about 25 km (15 miles) southwest of Karakol. The name means “seven bulls”, which comes from the fact that the rocks look like seven bulls. Jeti-Oguz Rocks are a protected Nature Monument.

There is a legend about how the rock formation came to be. A Kyrgyz khan stole the wife of another khan. This khan then went to seek the advice of a wise man about how he could get revenge. The wise man was reluctant to give advice, but in the end relented, telling the khan that he should kill the wife and give her body to his rival, saying “Let him own a dead wife, not a living one.” The khan made his plans, and at a funeral feast, he arranged to sit next to his stolen wife. As the last of seven bulls were being slaughtered for a ritual, the khan took out his knife and stabbed his wife. Blood gushed from her heart, which carried away the bulls down the valley, and when they came to rest, they became these red rocks.

On the approach to Jeti Oguz, there is another rock formation that resembles a broken heart. Legend says that this is the heart of a beautiful woman who died of a broken heart after two suitors killed each other fighting over her. These two rock formations have become symbols of the Issyk-Kul region and are favorite images for photographs and paintings.

In the village, there is an ancient cemetery and some barrows (burial mounds) dating from the 7th to the 5th century BCE. They are currently between 16 and 28 m (52 and 92 feet) in diameter and 1.7 to 3 m (5.5 to 10 feet) tall, though they were once even bigger. Not far up the valley is the Jeti Oguz Sanatorium, built in 1932. This sanatorium was the site of the first meeting between Presidents Akaev and Yeltsin in 1991, after the unsuccessful coup in Moscow.

About 5 km (3 miles) south of the Jeti Oguz Sanatorium is Dolina Svetov (Valley of the Flowers), a valley that is ablaze with poppies and other flowers from May to early summer.