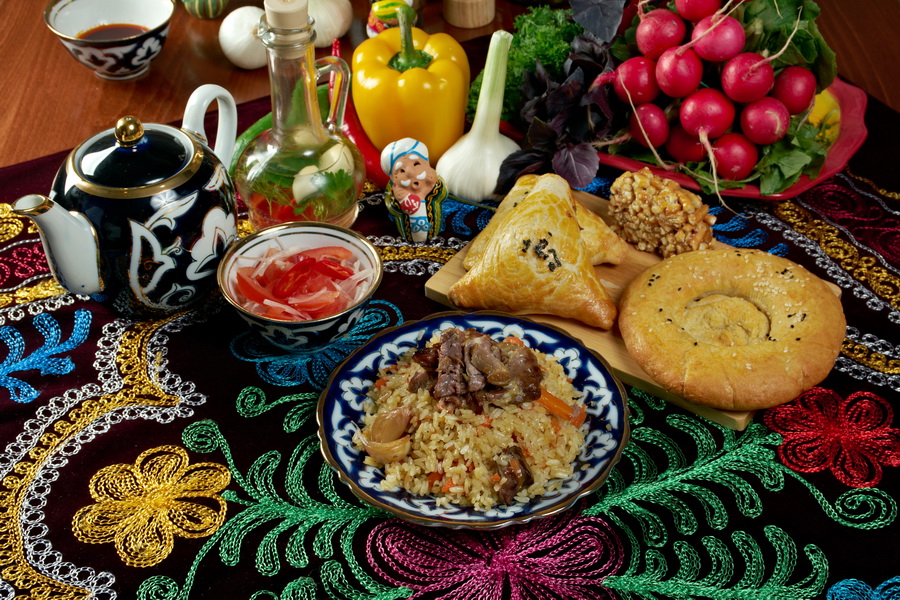 Uzbekistan national cuisine has long been central to Uzbekistan culture and is gradually becoming known the world over, as evidenced by the many Uzbek restaurants found not just in the former Soviet Union but also in Europe and America. So delicious is plov, the Uzbek national food, that it is included in UNESCO’s List of Intangible Cultural Heritage of Humanity.

Yet modern cuisine in Uzbekistan is actually a reflection of the 130+ nationalities who live in or near the country, a symbiosis of flavors which can be grouped into five categories: Traditional Uzbek food remains the most popular, followed by so-called European cuisine, which is actually a general term for all Western food. Russian, Oriental and Caucasian dishes are also widespread. So intertwined are these cuisines today that in some local restaurants traditional pilaf, American burgers and Japanese rolls may all be offered on the same menu.

Those who want to try more exotic dishes should taste katykli (a milk soup with meat, rice and vegetables), khasip (boiled sausage made from meat, offal, lard and rice) and sumalak (a gooey, slightly sweet mixture cooked from sprouted wheat). Dishes made from grains and legumes are also common.

Fruit is available in fertile Uzbekistan almost year-round. From spring through fall come an array of seasonal products, while in winter imported and dried fruits are popular. Dried melon particularly is a sweet delicacy that has been made in Uzbekistan for centuries.

Vegetables and spices are added to many dishes in Uzbek cuisine to produce a unique taste. Not surprisingly, Uzbek dishes have been declared by some to be among the best in the world.

Another popular cuisine in Uzbekistan is European or Western fare, a term which actually includes everything from Italian and French dishes to Mexican and American-style fast food. Although many Western foods are still not common in Uzbekistan, some of the most popular dishes have been absorbed into the local culture.

Uzbeks love to eat pizza, burgers with french fries, croissants and Caesar salads. Particularly in the capital you can find restaurants offering American, Turkish, Italian, Mexican, German, French and Mediterranean foods. In other cities there may be few to no international cafes, yet most eateries will still offer Western and European dishes such as French quiche, American burgers, English cutlets and Italian pizza and tiramisu.

Turkish doners and kebabs have already become synonymous with Uzbek national food. Now there are even hybrid dishes available - only in Uzbekistan, for example, can you try Turkish doner served with fresh Uzbek bread.

The popularity of Russian cuisine stems in part from the fact that for many Uzbeks, Russian foods are synonymous with home cooking. Both Russian and Uzbeks like to make homemade kvass, a drink made from fermented grains, and to eat herring with boiled potatoes. Many Russian pickled products and salads have become symbols of New Year celebrations in Uzbekistan, while other meals and side dishes are enjoyed year-round. On Orthodox holidays many Russians living in Uzbekistan treat their Uzbek neighbors to festive Easter cakes and other seasonal pastries.

Japanese sushi rolls and Thai tom yum soup can be tasted in most oriental establishments in Uzbekistan. Korean salads have long been a staple at special gatherings and holidays, with popular varieties such as funchoza, kimchi, seasoned carrots, eggplant mixtures and spicy cucumbers known and loved by Uzbeks.

Indian cuisine has starting growing in popularity and is particularly loved by vegetarians (who, although in the minority, can be found in Uzbekistan!)

Caucasian cuisine has been popular in Uzbekistan for so long that no one knows for sure if shish kebab first appeared in the Caucasus or in Uzbekistan.

Uzbekistan tours provide an opportunity not just to see historical monuments but to enjoy diverse 21st-century Uzbek national cuisine, which combines the rich tastes of Uzbekistan, Russia, the Caucasus, Europe and Asia to pleasantly surprise travelers.