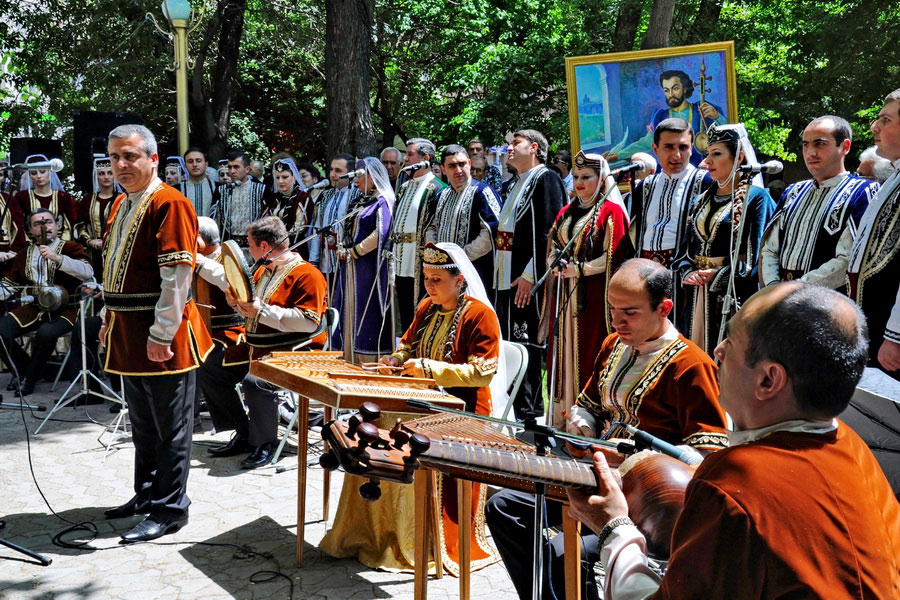 Armenian music includes secular and religious genres which are as diverse as they are ancient. Traditional Armenian folk music and Armenian church chords alike are based on tetrachords, a series of four notes separated by three intervals in which the last note also serves as the first note of the following chord.

Historically, Armenian music was the domain of singers, instrumentalists, dancers, storytellers and professional folk actors collectively known as gusans. Wealthy families employed their own private gusans, although there were also many popular illiterate artists who performed for the masses.

The arrival of Christianity gradually altered the ideology of the gusans, whose music began to shift from the secular to the sacred. Armenian chant, composed in one of eight modes and written in a form of indigenous notation called khaz, became the prime example of the latter, although some of the chants were actually of pre-Christian origin. Today, Armenian chants remain a vibrant element of local culture, with the finest performers, called sharakans, residing at Etchmiadzin Cathedral.

Gusans were succeeded around the 16th century by semi-professional minstrels called ashugs who played string instruments such as the kamancha and saz. Yet it was the duduk, an ancient double-reed woodwind instrument made of apricot wood, which stole people’s hearts and came to dominate Armenian music. Duduks have existed since at least the 15th century, although some Armenian scholars believe it to be much older. The duduk is now the national instrument of Armenia and is enlisted as a UNESCO Masterpiece of the Intangible Heritage of Humanity. Western audiences can hear duduk music in many films, including The Russia House and Gladiator.

Visitors to the country can hear Armenian music in every corner of the nation, for churches, concert halls and restaurants resonate with chants and the sound of kamancha, duduk and other Armenian instruments. Despite the pride they have in their heritage, Armenians have also adapted well to modern musical expressions. Be it classical music, jazz, rock, hip hop or pop, the Armenian music scene offers a wide choice of genres.

Beyond the country’s borders, musicians born in the Armenian diaspora continue to conquer the Western market. Some of the most well-known Armenian musical artists are the French-born Charles Aznavour, whose shows and songs span decades, and System of a Down, a heavy metal band from the United States whose members are of Armenian origin.