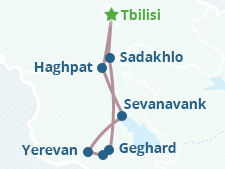 For those with a little extra time, but not a lot, this two-day tour to some of Armenia’s most engaging and unique sights is a perfect opportunity. Start at Haghpat Monastery, a prime example of traditional Armenian architecture perched above a winding river, before continuing on to Lake Sevan, the jewel of Armenia. Explore Sevanavank Monastery, one of the most recognizable sights in Armenia. After an overnight in Yerevan, head out for a sightseeing walk around the city, which will cover some of the most important and picturesque sights in the Armenian capital. Make a final stop at Geghard Monastery, a striking monastery cut into mountain cliffs, before returning back to Tbilisi with 2-day Tour to Armenia from Tbilisi.

Expand All   Collapse All
Day 1: Tbilisi – Armenian border – Haghpat – Lake Sevan – Sevanavank – Yerevan
At 09:00, our driver will meet you at your hotel in Tbilisi and take you to the Sadakhlo-Bagratashen Georgian-Armenian border point. Cross the border, meet your Armenian guide and driver to start 2-day Tour to Armenia from Tbilisi to the land of ancient traditions and oldest temples.
Drive to Lori region and visit Haghpat Monastery, a UNESCO World Heritage site. This stunning example of Armenian traditional architecture was erected in the 10-13th centuries. Standing on a hillside, Haghpat beautifully overlooks the Debed River. The location of the monastery was chosen to protect the peace and seclusion of the monks. Drive through Dilijan to Lake Sevan, “The Jewel of Armenia” and one of the largest high-mountain freshwater lakes in the world. The coastline of Lake Sevan is rich with thick woods, bare white steep rocks, mountain steppes and Alpine meadows. Stop at Sevanavank to visit the remnants of the monastery that include two temples – Surb Arakelots and Surb Astvatsatsin standing among numerous khachkars - carved cross-stones. The buildings were constructed from black tuff which probably gave the monastery its name Sevanavank – “the Black Monastery”. The place opens up a magnificent view: the mountains surround lake from all sides and snow tops are seen almost on the entire perimeter and disappear behind horizon. Continue to Yerevan for overnight.
Duration of sightseeing tour: 9-10 hours
Driving distance: 370 km
Day 2: Yerevan – Garni – Geghard – Sadakhlo border – Tbilisi
At 08:30, depart Yerevan and drive to Garni, one of the major villages in Armenia famous for its fortress. The fortress is the only pagan sacred place from the 1st century that survived the aggressive introduction of Christianity in the 4th century. Next stop is at the monastery complex Geghard (“spear”). The beautiful landscape of Geghard is framed with towering cliffs. Decorative art cut into rocks reflects and explains the Medieval Ages development in this part of the world. The complex appeared in the 4th century as a sacred spring inside the cave. Return to Yerevan for city tour.
One of the oldest cities of the world, Yerevan is famous as a pink city and entrances visitors with its humble and at the same time splendid landscapes. Visit the Cascade Monument, which was the main symbol of the city’s 2780th anniversary and has the equivalent number of stairs. The mega staircase is 500 meters high and 50 meters wide. A panoramic view from the monument opens to a breathtaking city view with Opera House, Mount Ararat, Swan Lake, Republic Square, and Abovyan Avenue, which you will also walk by during the tour.
At 14:00 – 15:00, depart to the Bagratashen-Sadakhlo Armenian-Georgian border point. Cross the border, drive to Tbilisi. Drop-off at hotel in Tbilisi. End of 2-day Tour to Armenia from Tbilisi.
Duration of sightseeing tour: 10-11 hours
Driving distance: 355 km 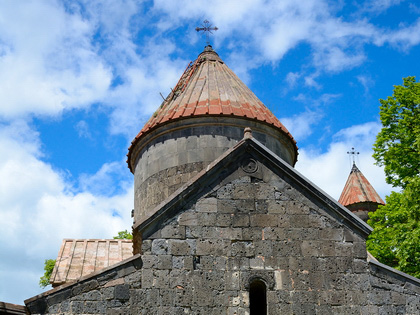 One-day Hiking Tour to Armenia from Tbilisi
1 Day | from US$170
Haghpat Monastery, Sanahin Monastery
All year round | Reviews (0) 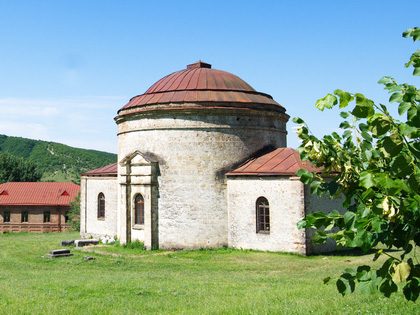 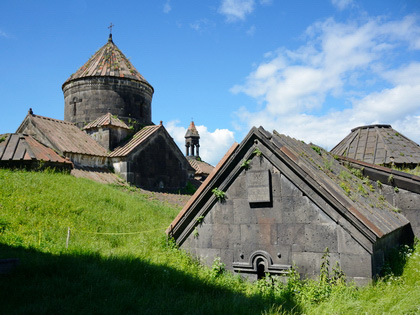 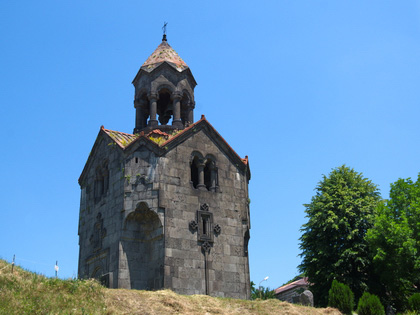 One-day Tour to Armenian Monasteries and Culture from Tbilisi
1 Day | from US$175
Haghpat Monastery, Alaverdi, Odzun Church
All year round | Reviews (0)