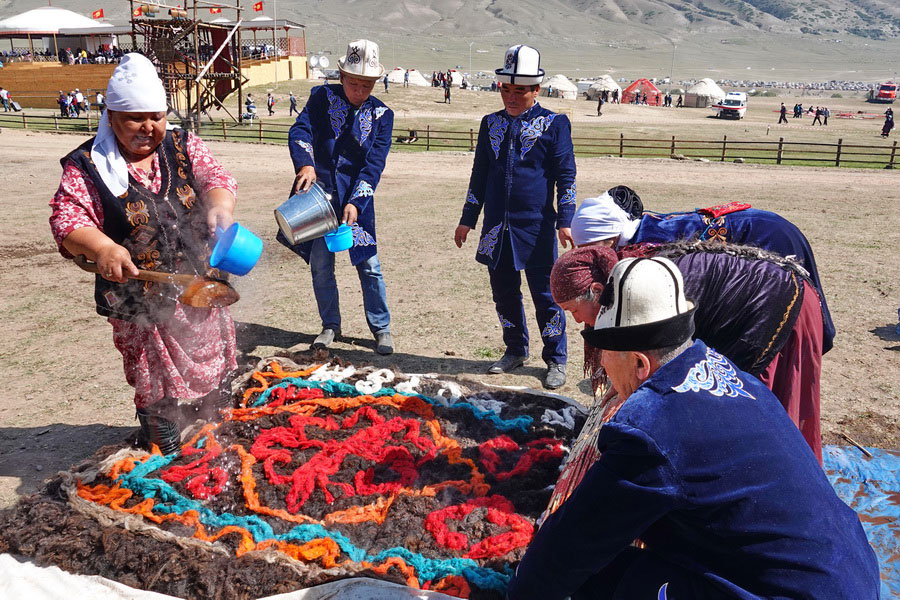 Ala-kiyiz are felt carpets, which sometimes serve as carpets, and sometimes as wall hangings. They can be large or small and it is possible to find examples that are like pictures. Wool is first of dyed different colours. It is not spun into a thread or made into a felt blanket but kept in a bag as loose wool.

A background is laid out taking wool of one colour and placing it on a mat of chiy on which a felt base has been stretched. Strands of other colours are then laid on top to create a pattern or picture. The resulting mat of loose wool can be several inches thick. The wool is then covered with a cloth so that it doesn’t move and sprinkled with hot water and the chiy mat is rolled up and string tied around it (like a Swiss Roll - the Chiy taking the place of the sponge cake and the wool that of the jam). The combined roll is taken to an open space and rolled, (with the hands, elbows and feet), kicked and trodden on for several hours. This melds the wool together into a friable whole. The mat is then unwound and the wool carpet left to dry.

When the wool has dried it becomes apparent that the colours have partly “washed out” - and the borders between them are less well defined - giving the individual motifs and the carpet as a whole an individual and unique appearance. For this reason, the technique is becoming particular popular for making “picture” panels.

An Ala-kiyiz carpet can vary in size – examples measuring 3m by 1m or 4m by 2.3, are quite common. Usually there is a large central pattern surrounded by a narrow border area. The pattern in the central area has a pattern with horn-like curls, (called “muyuz”). A wide variety of colours are used – such as reds, blues, brown, yellow and orange on a dark black or grey background.

Because the wool is not stitched, but is melded together by the process used to manufacture them, Ala-kiyiz are not such sturdy carpets as Shyrdaks - lasting only about half as long - but they are quicker and easier to make than to make and are more widely found than other types of carpet.