Exhibition of Achievements of the National Economy (VDNH), Moscow 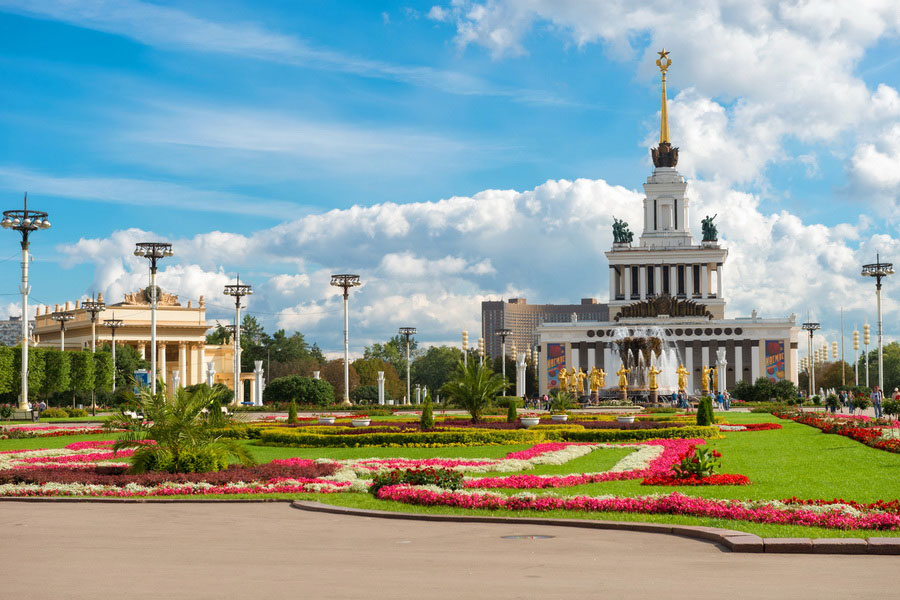 Exhibition of Achievements of the National Economy (VDNH) in Moscow is the second largest exhibition complex in the city and among the 50 largest in the world. Not surprisingly, it is a major city attraction that welcomes over 30 million visitors annually.

Construction of VDNH began in 1939, and in August 2019 the complex celebrated its 80th anniversary. The 87-hectare park now includes several themed areas that symbolize industrialization and the creation of urban green spaces. The territory is connected with the Botanical Garden and Ostankino Park and includes 49 Monuments of Cultural Heritage, including many Soviet exhibitions and sculptures which are symbolic of the country’s past. Among the most outstanding monuments are Stone Flower Fountain, Worker and Collective Farm Girl Sculpture by Vera Mukhina, Pavilion Cosmos, Uzbek SSR Pavilion and Agriculture Pavilion.

Did you know? Vera Mukhina originally intended to portray the iconic woman in the Worker and Collective Farm Girl Sculpture naked, with only a scarf covering her head. The clothes were only added so that the statue could pass the final stage of approval.

The main entrance to the symmetrically-built VDNH is marked by an arch located next to the VDNH metro station. True to its name, Central Alley is the major road which winds through VDNH from the arch and eventually leads to Central Pavilion, next to which is a monument of Lenin. After passing Central Pavilion, you will reach Friendship of Nations Fountain, located on a square of the same name. Around the perimeter are thematic pavilions dedicated to various industrial branches and the republics of the former USSR.

As you walk through VDNH, you cannot miss the replica of Vostok Rocket and other aviation equipment. In the northeastern corner of Industrial Square are the Livestock Town Pavilions, dedicated to cattle breeding and partially decorated with bas-reliefs depicting sheep, pigs and other farm animals. The western section of the Moscow exhibition is devoted to agriculture and the production of fertile crops.

Most of the famed pavilions at Exhibition of Achievements of the National Economy were built in 1950-1954, although a few predate 1939 and still others were added after the 1950s. Each reflects the architectural style that prevailed at the time of its construction. Thus, most pavilions from 1939 were created in the Art Nouveau style, while those built in the 1950s reflect Stalinist Architecture.

The pavilions dedicated to each SSR republic were previously decorated with the coat of arms and ethnic ornamentation of each respective republic, their names inscribed in both Russian and the national language of the republic being represented. In the 1960s, nearly all of the VDNH pavilions underwent reconstruction which radically changed their appearance, although most still reflect Soviet architecture and convey a distinctly historical feel even to this day. After the collapse of the USSR, many of the ethnic pavilions were repurposed as industry and agriculture pavilions.

Anyone who wishes to catch a unique glimpse into Soviet history from a variety of angles will find a trip to Exhibition of Achievements of the National Economy to be time well spent!