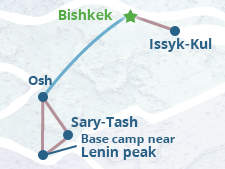 Discover one of the most popular peaks of the world annually conquered by hundreds of alpinists with the 8-day Lenin peak tour in Kyrgyzstan. The mountain attracts many people with its medium level difficulty of climbing, and for this reason you can meet there hiking fans from all over the world. Besides, in the course of the tour, you will see sights of Bishkek and Osh, and to the end of the program you will have some rest on the shores of the Lake Issyk-Kul, the main resort of Kyrgyzstan.

Expand All   Collapse All
Day 1: Airport – Bishkek – Ala-Archa – Bishkek
Arrival to Bishkek, transfer to the hotel. After check into the hotel start explore the city. Visit the Museum of Fine Arts, Ala-Too Square, Independence Square, Philharmonic Square, University Boulevard, Victory Square and TSUM Department Store for souvenirs. After lunch transfer to the Ala-Archa National Park (40 km). You will be in the alpine gorge through which the fast flowing Ala-Archa River runs, flanked by tall, snow-covered peaks and steep-sided, forested mountain slopes. Hiking in the gorge. Return back to the alpine camp. Transfer back to Bishkek. Overnight at the hotel.
Meals: Breakfast/Lunch
Day 2: Bishkek – Osh
In the morning fly to Osh. At the airport, you will be met by the local guide and driver. Upon arrival to Osh accommodation at the hotel. After lunch there will be city tour in Osh. As legends say Osh was founded by King Solomon ages ago and had an important position on trading routes of the Great Silk Road. Today you will visit Suleiman-Too (Solomon’s Mountain), museum, Osh bazaar – this market locates at the same place as in the times of Great Silk Road.
Meals: Breakfast
Day 3: Osh – Sary-Tash
After breakfast transfer to Sary-Tash (220 km). The scenery during the journey is changeable with tree lined mountain slopes, small rivers and gorgeous panoramas. After picnic, the road goes over the Taldyk pass (3615 m) and descends to the village of Sary-Tash. Dinner and overnight in a home stay.
Meals: Breakfast/Dinner
Day 4: Sary-Tash – base camp near Lenin peak
Transfer to the base camp of Lenin peak. It is the third highest peak in the former Soviet Union and is considered to be one of the easiest mountains over 7000m. Because of this fact it has become one of the most popular peaks in the world and annually receive hundreds of climbers from all over the world. Today you will have a chance to see the glaciers and high mountains, take pictures and hike around. Overnight at the base camp in the tents.
Meals: Breakfast/Lunch/Dinner
Day 5: Base camp near Lenin peak – Osh
After breakfast transfer to Osh. Free time. Accommodation at the hotel.
Meals: Breakfast
Day 6: Osh – Bishkek – Issyk-Kul
Transfer to the airport to take flight to Bishkek, upon arrival in Bishkek you will be met by the driver and guide and transfer to Issyk-Kul lake. On the way visit Burana Tower. It is an 11th century minaret, and one of the first buildings of such type in Central Asia. Burana tower was one of the capitals of Karakhanid khanate. In Karakhanids' time towns and settlements were well - developed. Burana tower, mausoleums and other buildings were found during the archeological excavations. You may see most of those remains of ancient civilization during the stop at Burana tower. Lunch at the Kyrgyz family to taste local national dishes. Your final stop for this day is in Cholpon-Ata city which is located on the northern side of the Issyk-Kul lake which is the second largest alpine lake in the world (1600 m. above sea level). Overnight at the hotel.
Meals: Breakfast/Lunch/Dinner
Day 7: Issyk-Kul – Bishkek
In the morning, trip to Cholpon-Ata, where visitors can see an ancient rock inscriptions and also visit Ethnographical Museum. In the afternoon, return to Bishkek. Farewell dinner. Overnight at the hotel.
Meals: Breakfast/Dinner
Day 8: Bishkek – airport
In the morning, transfer to the airport.
Meals: Breakfast 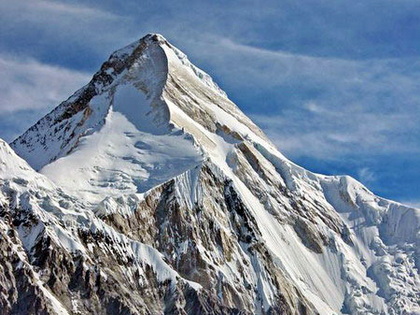