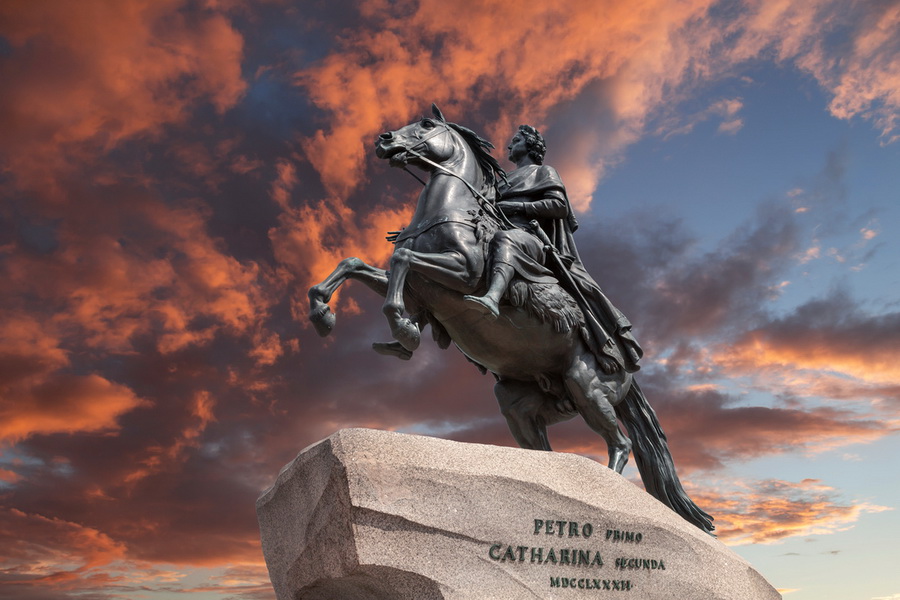 The history of Russia begins with the emergence of the Slavs who appeared around 3-3,500 years ago, evolving from the Indo-European ethnic group. From the middle of the first millennium B.C. they began to move in to Eastern Europe and populated the basin of Dnieper, Dniester, Western Dvina, Oka and upper Volga by the 8th century B.C.

The first Russian state Kievan Rus’ existed for about 300 years. It was a federation of principalities, ruled by the Rurik clan. The development of feudal relations and the strengthening of the independence of separate cities resulted in political fragmentation of Kievan Rus’. In the late 1330s the Mongols descended upon Rus’ and it was put under the suzerainty of the Khanate of the Golden Horde for almost 250 years. The yoke accelerated Rus’ dissolution, but at the same time progressively turned into an incentive for integration as the economy and culture were reviving. Due to a number of factors, in the beginning of the 14th century, Moscow took the place of the political leader, which is explained by its favorable geographical position and far-sighted policy of its princes (knyazes).

17-18th centuries marked a new period in Russian history, when the capitalist system began to form, while the feudal system remained and even strengthened. The historical period known as “Time of Troubles” caused by extinction of Ruriks with the death of Ivan IV the Terrible’s son played an important role in these events. The social unrest caused by famine and strengthening of feudal exploitation sparked to such an extent that resulted in the first peasant war in the country’s history.

The era of Peter the Great became the time of serious changes, embracing all aspects of state and public life. The efforts of Peter I produced excellent results, although they were achieved by violence and exploitation of people. Their main result was the country's transformation into maritime power that significantly accelerated its development, reserving a rightful place for it among European states.

The reign of Catherine II is called "the golden age of nobility" and "enlightened absolutism" as the Empress completed the process of nobility’s transformation into the privileged class. The situation considerably worsened for the peasants: serfdom acquired the features of slavery. The increase in social conflicts resulted in the E.Pugachev’s peasant war, but its failure led to the expansion of feudal dependence. All this heralded the maturing crisis of the feudal system, acutely manifested in the 19th century.

By the beginning of 1812 most of Europe fell in vassalage from France. Russia and Britain were the only countries that posed a threat to Napoleon's plans. In 1812 Napoleon invaded in Russia with powers three times exceeding the western Russian army under the command of generals, but after six months of his campaign, the army, the strongest in history, was completely destroyed.

By the middle of the 19th century servile relationship in the country worsened and deteriorated: they aroused the landlords’ fears for the future, while the serfs had the growing discontent of their miserable condition. In the context of peasant unrest, particularly during the Crimean War, in 1862 the government, headed by Alexander II held a reform to abolish the serfdom.

In the years before the First World War 1914-1917, Russia's foreign policy was determined by the priority for rapprochement with Great Britain, enforced by the agreement of 1907 on the division of spheres of influence in Iran and Central Asia. This agreement led to the finalization of the Triple Entente- "good will agreement" of the military-political union of England, France and Russia, and Russia's participation in World War II. The internal political crisis that resulted in the February revolution in 1917 led to Russia’s recovery from the war. The revolution destroyed the old state system and established a new political situation. Power in Russia was seized by the Bolshevik Party headed by Vladimir Lenin, and the Soviets of Workers', Soldiers' and Peasants' Deputies was proclaimed the supreme state power authority. The Union of Soviet Socialist Republics (USSR) was established on 30 December 1922. After Lenin's death, internal political struggle deteriorated, and Joseph Stalin, who established a dictatorship and destroyed all his political rivals, came to power. In 1939 Russia and Germany signed a nonaggression pact, but on 22 June 1941 Nazi Germany attacked the Soviet Union, thus violating the treaty. So the World War II began. During the battles of Stalingrad and Kursk, Soviet troops assumed the offensive and defeated the German army, victoriously ending the war in May 1945 by taking Berlin.

Stalin died in 1953, after that the country saw a certain policy liberalisation and the rehabilitation of a number of victims of Stalinist terror. The Khrushchev's Thaw came. The First Secretary of the CPSU- Nikita Khrushchev denounced Stalin's personality cult, held a series of democratic reforms and massive rehabilitation of political prisoners. The Khrushchev's removal from power heralded the beginning of so-called stagnation era - a period marked by the absence of any major upheavals in the political life of the country, as well as social stability and relatively high living standards.

In 1985 Gorbachev announced perestroika (set of political and economic reforms),by the beginning of the 1990s, the restructuring resulted in the USSR disintegration. A referendum held on 12 December 1993 adopted the Constitution of the Russian Federation, declaring Russia a democratic federal state with a republican form of government with the president at the helm.