The basis of national men’s suit is a chapan, the quilted robe, tied with a kerchief. Traditional men’s cap is tubeteika. Kuylak is the men’s straight cut undershirt. Ishton is men’s wide trousers, narrowed at ankles. Traditional footwear is high-boots, made of thin leather. Shirts were worn everywhere, but men from the Fergana Valley and Tashkent region wear a yakhtak, a wrap shirt. Both of these types were sewn from homespun cotton cloth and feature a moderate aesthetics in a form of a decorated miniature braiding- jiyak, stitched along the collar.

Belts for gala dresses were normally very smart, made of velvet or embroidered, with silver figured metal plates and buckles. Everyday shirts are tied with long sashes.

Traditional Uzbek women’s suit consists of plain khan-atlas tunic-dress and wide trousers. Holiday garments were made of satin fabric richly embroidered with golden thread. Women’s headdress consists of three elements: a skull-cap, kerchief and turban. An essential part of traditional holiday garments of Uzbek women are gold and silver jewellery: earrings, bracelets, necklaces. Surkhandarya women most of all prefer the colors of red nuance as a symbol of well-being. The embroidery pattern was chosen not by chance, it always had magic or practical function. One could judge about the owner’s social status by the patterns, though sometimes they bear other meanings. For instance, repeating geometrical pattern on the braiding was a something like an amulet Clothing of black or dark blue colors was not popular in any region of Uzbekistan due to a superstition. Sogdian patterns have preserved the traces of Zoroastrian influence. The colors in this region were chosen on the basis of the position in society. For example, prevailing blue and violet nuances in a woman’s dress showed her husband’s pride of place, while greenish motifs were frequently used by peasants and craftsmen.

The footwear consisted of mahsi (ichigi – nice heelless step-in boots with a soft sole), and high boots made of rough leather or rubber. It was very handy and warm footwear which is quite popular even today.

Headdress is one of the main elements in the traditional Uzbek clothing. The national headwear in many countries of Central Asia, including Uzbekistan is a tubeteika (skull-cap). Tubeteika is derived from the Turkic word “tubé”, which means “top, peak”. Tubeteika is worn by everybody: men, women, and children. Only elder women do not wear tubeteikas. 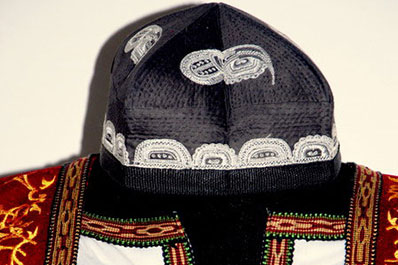 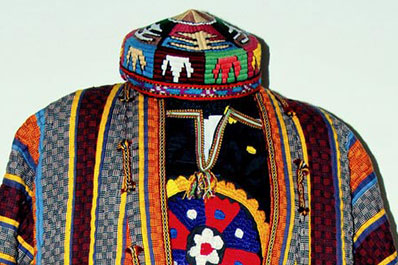 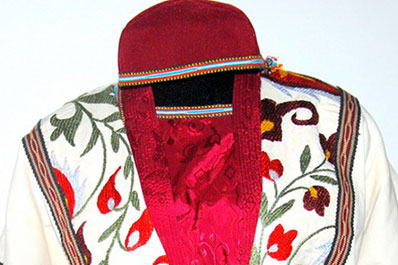 Today it is uncommon to meet a man in the tubeteika in large cities, mainly it is an important element of holiday garments at family parties and religious celebrations. The common form of the Uzbek tubeteika is tetrahedral and slightly conical. Traditional men’s tubeteika is black and embroidered with a inwrought white pattern in a form of four “paprikas” and 16 miniature arches. An everyday tubeteika, “kalampir”, is one of the simplest and widely used cap, its importance must not be underestimated. This tubeteika is an essential attribute for some events even in the environment of a country-wide influence of the European culture. There are smart tubeteikas enriched with bright and colorful embroideries and patterns for special festival occasions. Each region of Uzbekistan has its own national headdress 'tyubeteyka' (in Rus) in height and pattern. Despite the wide range of variety it is considered that there are only six main schools of tyubeteyka embroidery in Uzbekistan: Ferghana, Tashkent, Kashkadarya-Surkhandarya, Samarkand, Bukhara and Khorezm-Karakalpak. For special, festive cases there are smart tyubeteykas that are rich in bright and gold embroidery and patterns. 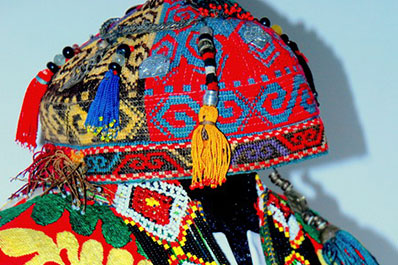 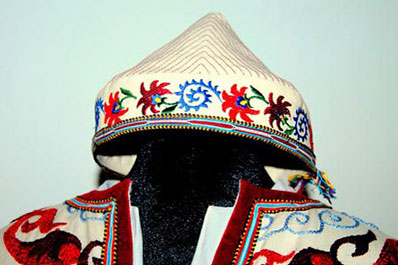 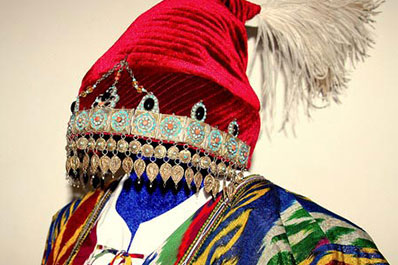