Kurash (translated as “attaining a goal by fair means”) is a kind of national waist belt fight, traditional among the Turkic peoples officially included in the world’s network of non-Olympic sports and supported by UNESCO. This kind of single combats originated in the territory of Uzbekistan presumably about 3,500 years ago. In the ancient legendary epos Alpomysh, kurash is mentioned as the most popular and favorite kinds of single combat. Whereas historian and philosopher Herodotus in his work “History”, described kurash in detail among other customs and traditions of ancient Uzbekistan. 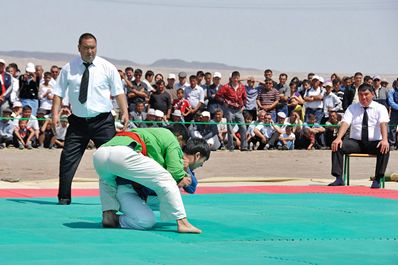 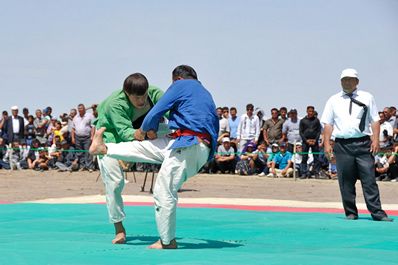 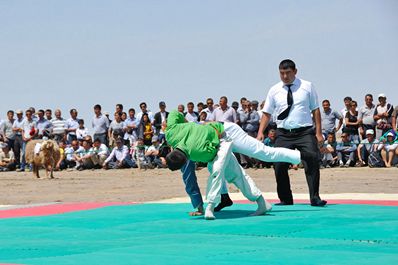 Avicena considered this kind of single combats salubrious not only for body but also for spirit, while Tamerlane introduced kurash to his fitness and self-protection program, developed for the soldiers of his unconquerable troops. Furthermore certain battles were preceded by straight fights: where fighters of the feuding parties met. There were cases when upon such straight fights the commanders ceased hostilities and canceled the battle. Kurash was not only a kind of single combats but also public entertainment during various events and festivities. Years went by, but kurash did not lose its national popularity, being one of the most favorite and respected traditions among the Uzbekistan’s peoples.

Over a number of centuries the kurash rules, as well as technique, traditions and philosophy were passed from generation to generation. But no attempts to systematize as well as generalize the whole information on kurash were made; indeed, each family anyway has all necessary knowledge about it. And what is more, kurash never spread beyond Central Asia. It was not until 1980 when Komil Yusupov, kurash, judo and sambo master, began studies which ten years later resulted in making universal rules. The millennial traditions which were thoroughly studied served as a basis to determine weights, terminology, jests, fight duration, uniforms for fighters and referees. Everything that was essential to turn an ancient folk entertainment into a modern kind of sport was worked out. 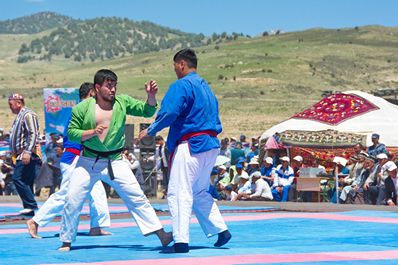 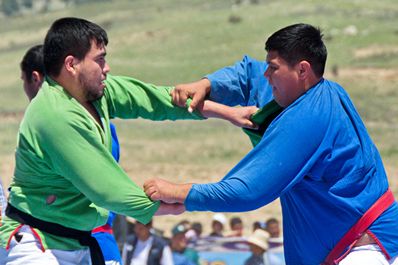 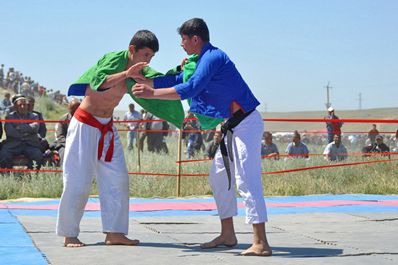 Kurash uniform includes wide white trousers and a loose shirt. An imprescriptible part of the uniform is a fabric belt used for comfortable hold of the rival. The girdle made of soft fabric measures 180–220 cm long and 50–70 cm wide. The main kurash rules are rather simple. The competitions are held on a special mat with thickness at least 5 cm, with a marked working zone (located in the center), protective zone and with a “passive zone” separating them. Two participants meet in the working zone. The only position permitted for the combat is a standing stance. The aim set before the contestants is to throw the rival on the back; this result in kurash is considered a victory by fall. To achieve the goal the fighters are allowed nothing but dashes and undercuts to be assessed by the judges. Kurash is a safe and simple combat sport since any painful, beating and submission holds, grips below the belt are prohibited there. In spite of these prohibitions the straight fights are very dynamic and theoric.

Kurash has embodied a centuries-long philosophy and such values as respect to the rival and humanism, honesty and ability go all the way. This kind of single combat is one of the youngest international sports; it starts gaining popularity all over the world. Kurash world championships as well as those of Russian and European take place on a regular basis. The International Kurash Association with the participation of representatives from 28 countries from Asia, Africa and Europe was founded in 1998 and which has been functioning up to date.