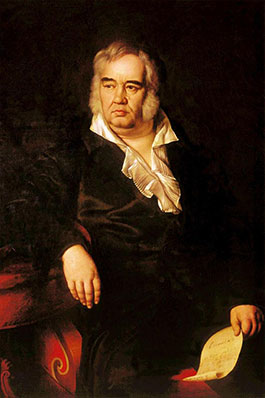 When Krylov, Ivan Andreyevich, one of the greatest Russian fabulist, translator and writer was still quite young, he could not imagine that he would stand in the very center of Petersburg, as a bronze monument, enriching the landscape of the famous Summer Garden. Krylov was born on 2 (13) February 1769 in Moscow, but virtually the whole period of his creative work coincided with his life in Petersburg, the place where he died on 21 November 1844. Krylov is an author of over 200 fables. Many people do not know, but a great many of quotations from Krylov’s fables became so famous, that they made up an every-day communicational culture. Krylov’s works of literature were translated into many world’s languages and have been republished up to date.

Krylov, Ivan Andreyevich was born in a family of poor military officer. His family was moving about so much, that the researchers were never able to identify his exact birthplace. There exists an opinion that he was born somewhere in Zavolzhye (Transvolga).

In 1775 Krylov’s father left military service and having taken up residence in Tver, got a job of a clerk there. It was the time when the future fabulist’s father had a chance to give good education to his son - Ivan studied in the family of Tver governor together with his children.

Krylov did not managed to continue his study, but the level of education received by him in Tver surprised Pushkin himself very much. His father died when Krylov was only ten years old. He had to start working to support the family. It was at that time when, he began working as a scribe for peanuts at Tver town council.

When Krylov was fourteen, he moved to Petersburg and got a job in Treasury Chamber and at that period he began making a shot at literature, writing comedies. From 1789 to 1793 Krylov and his friends were publishing satirical magazines: “Post of Spirits”, “The Spectators”, and “St-Petersburg Mercury”.

From 1805 Krylov enjoyed the most fruitful period of his creative work, he began writing fables, which brought all-Russian fame to him. Gogol himself called the Krylov’s collection of fables as “the book of people’s wisdom”.

So, what then is the charm of the Krylov’s fables in? Why do we often cite him, forgetting that it is Krylov? First of all, it is in the individuality of this talented author. Pushkin said about him, Krylov possessed a “picturesque way of expression”. His language is so simple, but at the same time live and figurative, that it can be compared with painting. The wealth of Krylov’s artistic language was formed under the influence of literary tendencies of the XVIII century, which considerably differed from that of the XIX century, and also on the basis of the writer’s excellent knowledge of the refinements of the folk idiomatic speech. Reading Krylov’s fables one has impressions that they were written by a talented man who came from the commonality.

I. S. Turgenev wrote an eloquent portrait of Krylov of last years, having met the famous fabulist in the house of “one of the officials, who was a middling Petersburg man of letters”: “He was sitting more than three hours, motionless, between two windows – and never uttered a word! — Turgenev recalled. There was neither sleepiness nor attention on his vast pure Russian face – just a headful, and also hardened laziness; sometimes something like tongue-in-cheek as though was trying to escape but cannot – or do not want to come out...”.