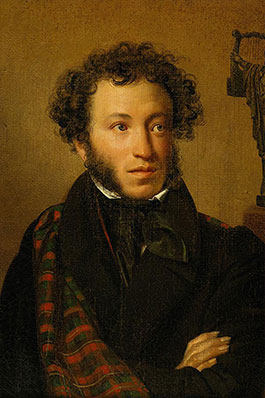 The sun of Russian poetry, Alexander Sergeyevich Pushkin, is a national genius, the creator of unsurpassed poetry. The Russians sometimes say that Pushkin is “all that we have”. Raised on French classicism of the 17th century and the literature of Enlightenment of the 18th century, Pushkin was also influenced by romantic poetry and having absorbed its creative wealth, he was one of the first to reach the level of high realism. In 1810 – 1820s he sang glory to freedom and ridiculed monarchs. While following the development of the Decembrists’ movement, Pushkin created his poems “The Prisoner of the Caucasus”, “The Robber Brothers”, “The Fountain of Bakhchisaray”, and “The Gypsies”, the pieces shining brightly with romanticism. From 1823 Pushing worked on his greatest creation, “Eugene Onegin” (1823 – 1831) depicting in details the life of Russian society. Pushkin also showed himself as a history chronicler. He wrote the national historical tragedy “Boris Godunov”, which occupies the highest positions both in Russian and world’s art. In his novels “The Captain’s Daughter” and “Dubrovsky” Pushkin mentioned the subject of Pugachev uprising. The inimitable beauty of Pushkin’s art was immensely proven in his lyrics, which penetrates deeply into a human soul. Pushkin was the central figure in Russian literature of the first decades of the 19th century. His name is linked not only with the blossoming of Russian poetry but also the formation of Russian literary language.