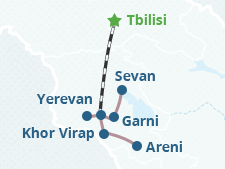 Short but rather intensive train tour to Armenia from Tbilisi is an excellent offer for those who have already got to know Georgia. In four days, you will see the most popular religious and architectural monuments that seize more than 2000 years of Armenian history.
Explore Yerevan, pink city and capital of Armenia; the well-known religious center Echmiadzin, where one of the first Christian temples is located; Garni, Greco-Roman style architecture; stone monastery Gherard and the Sevan Lake, one of the largest high-mountainous fresh water lakes in the world. You will visit Noravank monastery and Khor-Virap, and the town of Areni famous for pomegranate and apricots wines.
If you are lucky to be in Tbilisi, expand the list of visited countries and meet this amazing country named Armenia.

Expand All   Collapse All
Day 1: Tbilisi – Yerevan
Embark overnight train departing Tbilisi to Yerevan at 20:20 from Tbilisi Central to begin Armenia Train Tour from Georgia. Overnight in sleeping compartment for two passengers.
Day 2: Yerevan – arrival – Etchmiadzin – Yerevan
Arrival in Yerevan at 06:55. You will be met by our guide and driver and transferred for breakfast.
After breakfast depart Yerevan to the Holy See of Armenia, Etchmiadzin. Visit Etchmiadzin Cathedral, which is the residence of the head of the Armenian Apostolic Church, the Catholicos of All Armenians, and ancient temple of St. Hripsime. Return to Yerevan, one of the oldest cities of the world. Yerevan is famous as a pink city and calls visitors with its humble and at the same time splendid landscapes. Start the city tour with a visit to the 572-step Cascade Monument, which serves as the main symbol of the city. The mega scale staircase is 500 meters high and 50 meters wide. A panoramic view from the monument opens up breathtaking city view with Opera House, Mount Ararat, Swan Lake, Republic Square, and Abovyan Avenue, which you will also walk by during the tour. An excellent round-up of the tour will be a visit to Matenadaran – depository of Ancient Manuscripts. Overnight at hotel.
Day 3: Yerevan – Garni – Geghard – Sevan – Yerevan
Depart Yerevan and drive to Garni, one of the major villages in Armenia famous for its fortress. The fortress is the only pagan sacred place from the 1st century that survived aggressive introduction of Christianity in the 4th century. Next stop is at the monastery complex Geghard (“spear”). The beautiful landscape of Geghard is framed with towering cliffs. Decorative art cut into rocks reflects and explains Medieval Ages development throughout the region. The complex was introduced to the history in the 4th century as a sacred spring inside a cave. Drive to Lake Sevan, “The Jewel of Armenia” and one of the largest high-mountainous fresh water lakes in the world. Stop at Sevanavank to visit the remnants of the monastery that include two temples – Surb Arakelots and Surb Karapet - standing among numerous khachkars. The view from there is simply magnificent: the mountains surround lake from all sides and snow tops are seen almost on the entire perimeter and disappear behind horizon.
Day 4: Yerevan – Khor-Virap – Areni – Noravank – Yerevan
Check-out from hotel till noon. After breakfast at 10:00, head to Khor-Virap Monastery (“deep pit”). According to the legend, St. Gregory the Illuminator, the patron saint of Armenia, was kept here in the basement for 13 years for the disseminating of Christianity until King Tiridates decided to adopt new religion. The monastery's location allows you to enjoy the best views of the Mt. Ararat. Continue to the famous Noravank Complex, situated on the ledge of a deep winding gorge of a tributary of the Arpa River near the village of Amaghu, Yeghegnadzor District. The Noravank ensemble stands amidst the bizarre-shaped precipitous red cliffs. Built in place of an ancient cloister, it grew under the reign of Princes Orbelian of Syunik. In the 13th-14th centuries it became a residence of Syunik's bishops and, consequently, a major religious and later cultural center of Armenia, closely connected with many of the local seats of learning, primarily with Gladzor’s famed university and library. Return to Yerevan. Stop on the way at Areni, a city known for producing famous Armenian wine from pomegranate and apricot. Have a wine degustation in a local winery.
At 20:30, transfer airport or to train station. Depart to Tbilisi on overnight train at 21:30. Arrival at Tbilisi Central on the next morning at 07:50. End of Armenia Train Tour from Georgia. 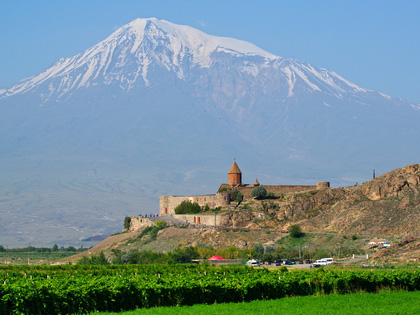