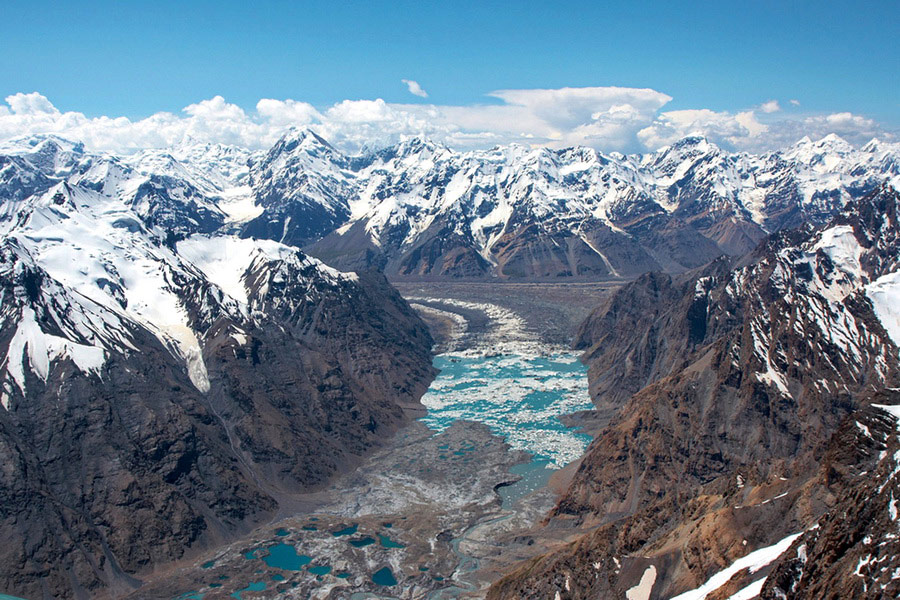 Lake Merzbacher is in the northeastern corner of Kyrgyzstan, where two ridges of the Tian Shan converge and peaks rise to over 6000 m (19,685 feet). In the shadow of Khan Tengri lies the Inylchek Glacier, near the border with Kazakhstan and Peak Pobeda to the north and the border with China to the south. Stretching for 60 kilometers (37 miles) and covering an area of 583 square kilometers (225 square miles) with ice, some of it as much as 540 m (1,770 feet) thick, this is one of the most famous glaciers in the world.

Between the northern and southern branches of the Inylchek Glacier is Lake Merzbacher, which forms every summer, and then, usually in August and sometimes also in the winter, bursts through the ice banks and flows into the Inylchek River. Only part of the river drains: Lake Merzbacher is in fact divided by an ice bridge into two parts, and while the lower half regularly empties, the upper part is always full of water.

In 1903, the German geographer and mountaineer Gottfried Merzbacher first discovered the lake while leading an expedition into the Tian Shan, aiming to reach the summit of Khan Tengri. They found their original route through the Bykanol Pass and along the Semyonov and Mushketov Glaciers closed by ice, so they attempted a different approach along the Inylchek Glacier. Once again they failed, but they did show that Khan Tengri was in fact on a ridge and not in the center of that particular knot of the Tian Shan, as had been thought. The expedition is better remembered, however, for the discovery of the mysterious lake that now bears Merzbacher’s name.

The expedition came across a clear lake, 3,500 meters (11,500 feet) above sea level, trapped between the two branches of the glacier, with the surface dotted with icebergs. While the group was still nearby, the lake suddenly drained. Another group of explorers 28 years later experienced the same event. To their astonishment, the lake emptied right before their eyes, leaving icebergs stranded on the dry lake bed. Their graphic accounts tell about how the water gushed from crevices in the ice, accompanied by great roars, which frightened the horses, and how the end of the glacier seemed to threaten to break away and rush downstream, destroying everything in its way. Some of the party returned the next year, only to find the lake full once more.

Although this may be a famous example of a disappearing lake, there are other similar occurrences around the world, including in Iceland, Switzerland and Greenland. There are several trekking routes in the area, but in this part, special border zone permits are required.