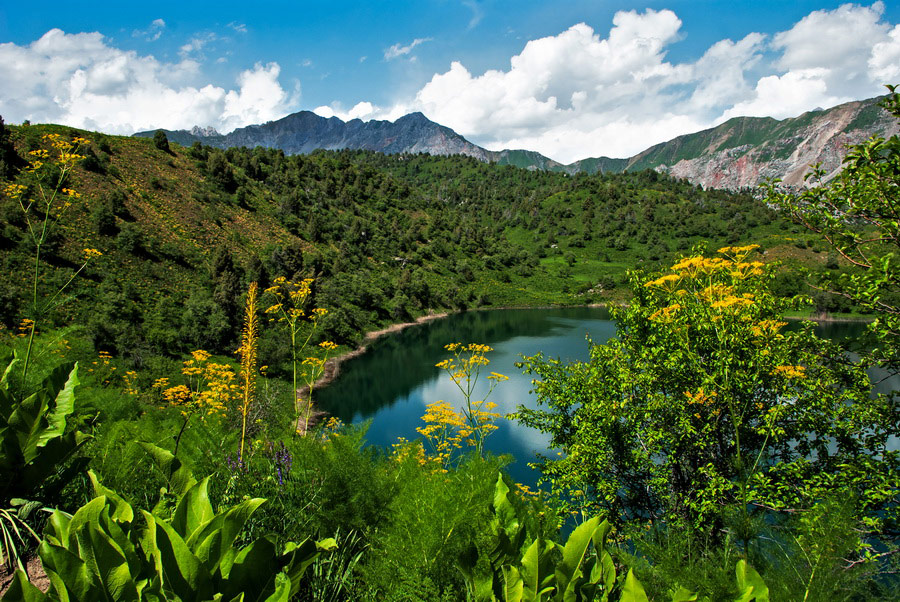 The water level changes with the seasons, with a variation of about 65 cm (25 in). The lake is fed by the Sary Chelek River, various streams, and underground thermal vents. The outflow forms the Tus-Kaul River. The waters often appear a shade of greenish-blue, which makes for attractive photographs.

There is some dispute as to how Sary Chelek was formed - some scholars think it resulted from the collapse of two ridges of mountains, which blocked the river and held back the waters, while other think it was the result of a shift along a fault line some 2,000 years ago.

The name Sary Chelek means “yellow bucket”. There is a legend that a beekeeper attending his hives on the lake shore was pouring honey into a bucket and was so taken by the color of the honey that he decided to name the lake yellow bucket. There are other people who think that the lake derives its name from the fact that in the autumn, when all the leaves of the trees turn colors, the whole basin reminds visitors of a yellow bucket.

It is only possible to access Sary Chelek from the north or south. From the north there is a trekking route over the mountains from Talas, which crosses high mountain passes and deep canyons. From the south, there is a road almost to the lake shore from the village of Arkyt, about 20 km away. There are some small lakes to the southeast, such as Kyla-Kol, Iyri-Kol, Aram-Kol, Cherek-Kol, and Bakay-Kol, but Sary Chelek is regarded as the gem, the jewel in the crown.

Generally, the climate at Sary Chelek is damper and milder than the rest of Kyrgyzstan. The high mountain ridges around the lake protect the reserve from the cold northerly winds in the winter, so the temperature here is much higher than elsewhere in the valleys, though it can fall to -27° C (-17° F) in the winter. Snow cover can be fairly uneven, with the southern slopes sometimes having no snow but other areas covered in a meter or more, and can last for over 100 days. In May and June the weather can be humid, but in the later summer it is warm, dry and windless.

Some fishing is permitted in the rivers feeding the lake, but not in the lake itself. Swimming was banned after fatal casualties in 1983. Hunting is absolutely prohibited in the reserve.