Monument to Minin and Pozharsky, Moscow 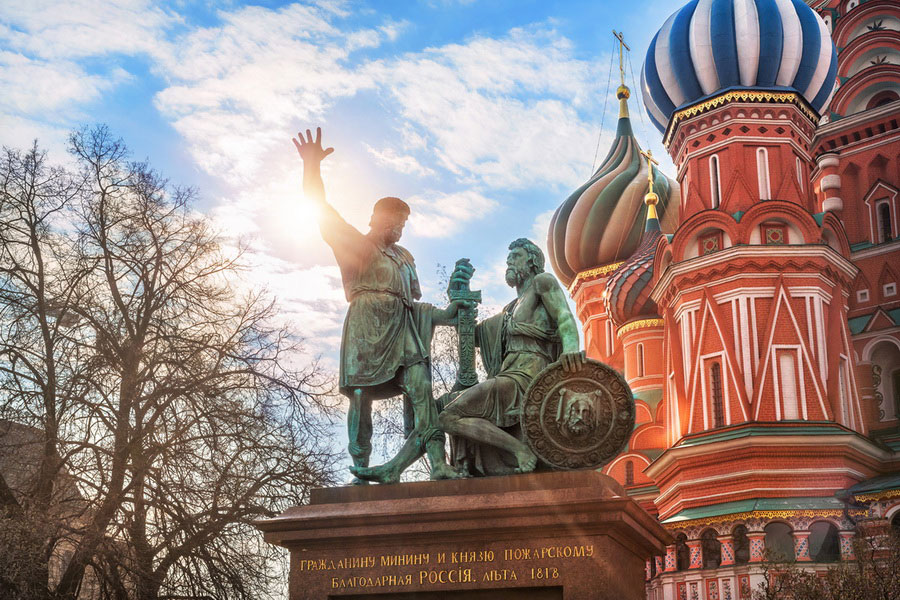 The ensemble of Red Square includes the monument to Minin and Pozharsky. This monument is an echo of the dark age that engulfed Russia in the early 17th century. During that period the rulers of Muscovy changed kaleidoscope-like, and Moscow itself was occupied by Polish troops. In such a difficult period Kuzma Minin, an ordinary citizen, urged people to unite in the name of national salvation and Prince Dmitry Pozharsky led the people volunteer’s militia. In 1612 Moscow was liberated. In honor of this event, in 1818, the Red Square was decorated with the first sculptural monument on a pedestal with the words: “To Citizen Minin and Prince Pozharsky from grateful Russia”. The author of the piece was Ivan Martos. The sculptor depicted the moment, when Minin (figure on the left) addressed the wounded Prince Pozharsky with the appeal to lead the Russian army and expel the Poles from Moscow. Standing, he gives the sword with one to Pozharsky while the other points at the Kremlin. The shield of Pozharsky has the image of the Savior. The antique Minin’s tunic worn over trousers reminds a Russian embroidered shirt. The monument is made of bronze; its height is 8 meters 80 centimeters. Originally the monument stood in the middle of the Red Square, then it was moved closer to St. Basil's Cathedral.