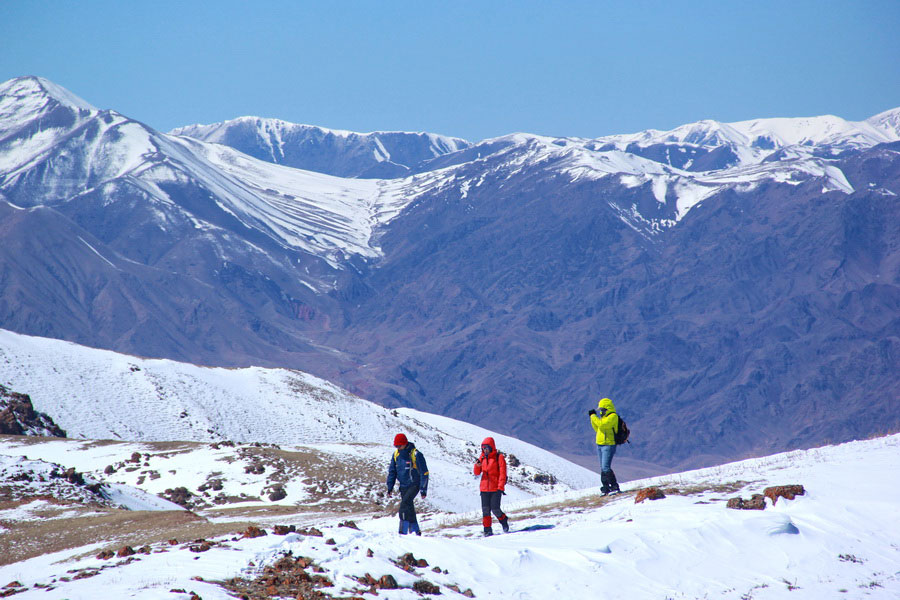 112 km (70 miles) from Bishkek on the way to Issyk-Kul, the road enters Boom Gorge, which lies at the eastern end of the Kyrgyz Range and provides the only corridor between Issyk-Kul and Bishkek. Passing together through this narrow canyon are a highway, a railroad, and the Chu River.

The name Boom (pronounced “bom”) means “evil spirit”. The gorge acquired this name in recognition of the trials and tribulations it presented to anyone who tried to pass through it. The first outsider to do so was the 19th century Russian explorer Pyotr Semyonov (Tienshansky), in 1850. He wrote in his memoirs: “The Boom Gorge is a deserted death trap. We could hardly advance along our path, which didn’t always follow the riverbank, as sometimes the cliffs would drop strictly vertically, forcing us to clamber up the walls of this stone corridor. To avoid such detours, we preferred, where possible, to wade against the violent torrent that hid the bed of rocks and promised every second to wash us away.”

It took Semyonov and his party twenty one days to cover the twenty two kilometers of the canyon’s length. It was, however, as a result of his explorations that the widely held opinion of the day, that it was the lake water which drained out through the gorge to feed the Chu River, was disproved. The river flows around the eastern edge of the Kyrgyz Range from Kochkor.

It took another twenty two years before a road was finally built in the explorer’s footsteps through the gorge. In 1871-1873, a path was cut along the contours of the meandering river.

The modern road is one of the best in Kyrgyzstan, but it may be surprising to learn that the first attempt to drive a vehicle from Bishkek to Balykchy failed - the car ran out of fuel. This might well be the reason for the petrol stations located by the bridge taking the new road over the river to Kubiki Pass, towards Kochkor and Naryn. The road is now one of the most important links between these two oblasts.

It used to be that to pass into Issyk-Kul Region, it was necessary to have a putyovka, or a voucher for accommodation in one of the numerous sanatoriums that line the shores of the lake. Apparently there used to be long lines of vehicles on the Chuy Region side of the river, where the traffic police office still stands. These days, most people simply drive through and don’t stop as they speed on their way to their holiday destinations.

Past the Red Bridge, which crosses the Chu River at the midpoint of Boom Gorge, there is another road to the Konorchak Canyons, another 20 km (12 miles) down the road.

The road through Boom Gorge is lined with statues of snow leopards, eagles, and stags, and an occasional Pioneer (the Soviet version of Boy or Girl Scouts). A number of roadside cafes have been established in the gorge for travelers to take a break, though they take business away from the smaller yurts and cafes at Holodnaya Voda (Cold Water), just a little ways away.

There are now walls and reinforcements at various places along the gorge that are designed to prevent landslides from cascading down onto the road below, but despite this, occasionally landslides do close the road for short times.

The Bishkek-Balykchy railway also travels through Boom Gorge, high above the road. Apparently built by German prisoners of war, the first train to travel along the 189 km (117 miles) track to Balykchy was in 1948. The gorge offers plenty of opportunities for rafting, camping, trekking, and whitewater rafting.