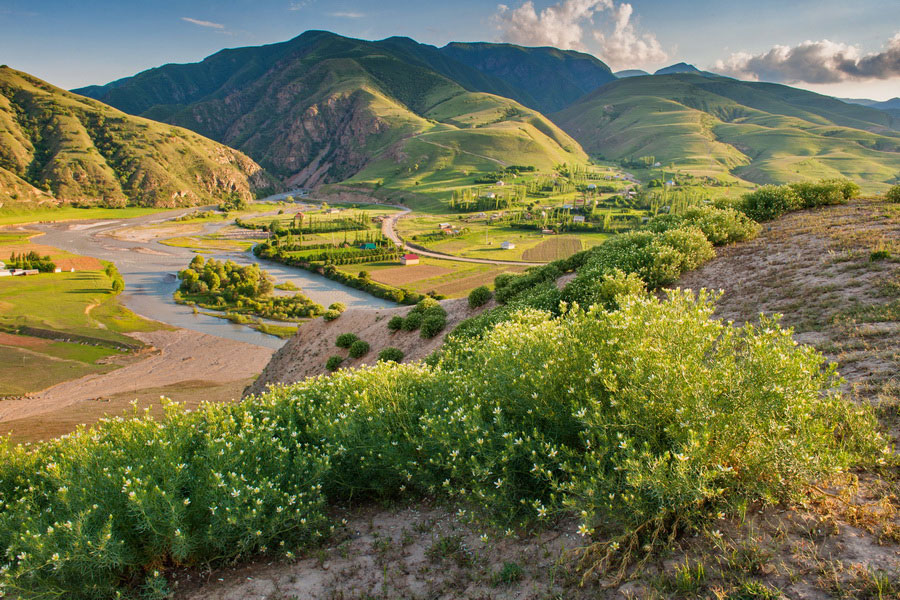 The Fergana Valley is an important corner of the world, located on the trade routes between empires. The Naryn and Kara Darya Rivers join in the center of the Fergana Valley to form the Syr Darya, which irrigates the valley and supports farming and agriculture. Transportation can be difficult throughout the region because of the intersecting borders and enclaves of Kyrgyzstan, Uzbekistan and Tajikistan, which sometimes bisect roads and routes.

The city of Khujand, in modern day Tajikistan, was founded in 329 BCE by Alexander the Great, who made Fergana the far eastern edge of his empire. The area was long famous for the Fergana horse, sometimes known as heavenly horses. These horses were so prized for their speed and strength that China was a constant presence in the region, trying to trade or take more horses. As a stop on trade routes across Eurasia, the Fergana Valley was a bustling and diverse center.

After the Samanid Empire pushed through Persia and into Transoxiana, the region was dominated by Persian, Turkish and Arab influences. Even though the Mongols arrived in the 13th century and were rulers for several centuries after, they so thoroughly assimilated that they adopted the same influences and mix of culture. Fergana Valley was a mix of confederations and khanates for a while, until Timur rose up from one of these to conquer a large amount of land in the late 14th century. A prince in the Timurid dynasty, Babur, would go on to conquer India and found the Mughal dynasty, thus bringing Islam (and the tandoori oven) to the Indian subcontinent.

The Fergana Valley became part of Russian Turkestan in 1876, at which time intensive cotton farming was started in the region. In the 1920s, Turkestan was divided into the five republics that exist in Central Asia today, and Fergana Valley was divided between Kyrgyzstan, Tajikistan, and Uzbekistan. Being an ethnically diverse region, lots of populations were left outside their titular republics (such as Uzbeks who ended up on the Kyrgyzstan side of the border), though this wasn’t a big deal as long as all the republics were part of the Soviet Union. People and goods could easily move across the borders, and transportation through the valley and around mountains was relatively simple.

However, when the Soviet Union collapsed in 1991, what had been internal borders suddenly became international. Sometimes the borders between the three countries closed, holding up movement throughout the Fergana Valley. Various enclaves and exclaves also make traveling through the Fergana Valley difficult, as now driving from one city to another in the same country may require an extra visa.

Still, the Fergana Valley is renowned for its place in history, and at the center of the Eurasian continent. The region is well known for agriculture and textiles, and any visitor can experience the excellent fruits and vegetables, and buy ikats and even local silks.