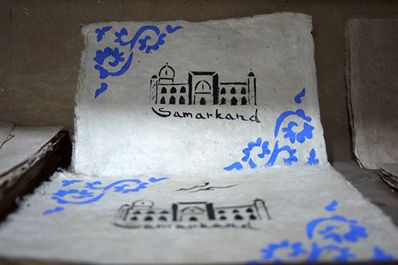 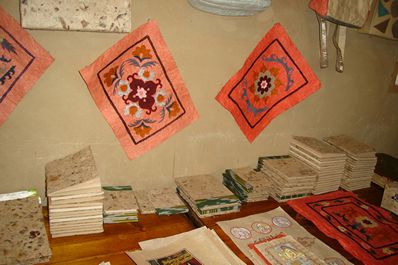 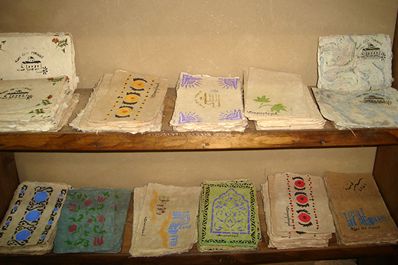 The Samarkand paper was very expensive and was produced in different grades. The“Sultan” paper considered the best grade eased out papyrus and leather from the European markets in early Middle Ages. The “Silk” grade rated the second which featured with its smoothness but was of light yellow color. The “worst” grade was considered “nimkanop” which was almost brown in color. This grade of paper was produced from silk wastes with an addition of admixtures.

Nowadays “Meros” Paper Mill founded by Mukhtarovs brothers, well-known masters, is operating in Konigil village near Samarkand. Thanks to their efforts the ancient paper production tradition by old technologies was restored. It is an interesting fact, that the whole production is carried out manually and every Mill guest may watch the paper production process de visu

The paper production technology is as follows. Silk waste, mulberry bark and bamboo sprouts (may be replaced by wooden sticks) are used as a raw material. All these are boiled for a long period and then ground to a homogeneous mass, which are formed to thin sheets by means of a special device. Then the paper is thoroughly dried, pressed and bleached. After that the most important moment of paper production comes. The sheets are thoroughly polished on a smooth marble with the help of onyx due to which the Samarkand paper gains its famous smoothness.