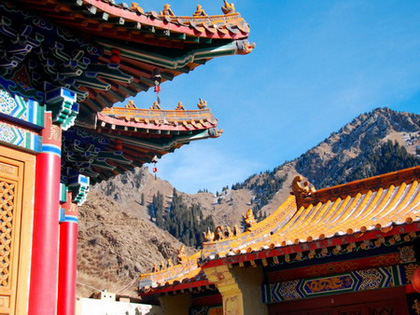 The ten-day China and Kyrgyzstan tour will be a perfect complement to the tours along the Great Silk Road. You will explore the two neighboring countries in a new light. You will plunge into antiquity discovering the archeological heritage in the ancient cities and enjoy a bewitching beauty of the nature in both countries.

Expand All   Collapse All
Day 1: Urumqi
Your China and Kyrgyzstan group tour starts in Urumqi where you will be met by driver and guide upon your arrival at the airport. Transfer to the hotel. Overnight at the hotel.
Meals: Breakfast
Day 2: Urumqi – Heavenly Lake (130 kms, 1.5 hrs)
After breakfast transfer to Tianshan Mountian wings. Visit Heavenly Lake & boat cruise on the lake.
110 kilometers away from Urumqi the Heavenly Lake is a long and narrow gourd-shaped moraine lake. There are eight beautiful scenic spots in the lake scenic area, they are: “A Ray of Stone Gate”, “Dragon's Pool and Green Moon”, “Magic Needle for Guarding the See”, “Three Stones Bearing the Sky”, “the Snowcapped Southern Mountain”, “Pine Billows in Western Mountain”, “the Hanging Waterfall”, and the “Sea Peak's Sunrise”.
At 2 PM back to Urumqi Visit Xinjiang Museum, Erdaoqiao Market & International Bazaar, where you can find almost anything that you can imagine. Overnight at the hotel.
Meals: Breakfast
Day 3: Urumqi – Turpan (190 kms 2.5 hrs)
After breakfast transfer to Turpan. Visit Bezklik Grottoes (50 km to the east of Turfan City). There are 83 numbered caves; among them 40 preserved murals totaling 1200 square meters. These caves are first excavated in Qu`s Gaochang period. The existing caves were reconstructed or newly extended by Uighurian people. Visit to Astana Tombs - known as “the Underground Museum". The graveyard of the residents lived in the Gaochang City in the Jin-Tang times, including large sized family graveyard. Transfer to Tuyoq Valley and Kumtag Desert.
Among more than 40 caves, there are 10 preserving murals. They are considered to be the earliest caves in Turfan. Although the most part of the murals are damaged, they keep their uniqueness in style. Overnight at the hotel.
Meals: Breakfast
Day 4: Turpan – Urumqi – Kashgar (190 km, 2.5 h.)
Breakfast. Visit Jiaohe Ruined city. The city includes city gates, streets and lanes, government office, temples, domestic houses, cave houses, wells, and an underground temple. Karez Irrigation System is a unique irrigation system in Turfan, which, taking advantage of the slopes, draws the underground water to flow by itself to irrigate farmland. It consists of four parts: vertical wells, underground channels, ground canals and small reservoirs. Sugong Minerat - the Tower was built in the 41st year of the Qianlong period of the Qing Dynasty. It is an embodiment of the ancient architectural arts of the Uygur nationality. Local Uyger family visiting is a special experience for you to know their lifestyle in the fireland.
Transfer to the airport in Urumqi. Flight to Kashgar. On arrival transfer to the hotel. Overnight at the hotel.
Meals: Breakfast
Day 5: Kashgar Sunday Market
Today is a further day in Kashgar for us to experience the famous Yakshambe Bazaar - the Sunday Market. In the morning we will first visit the famous animal market. Here we will spend the morning watching the locals trade everything from woodwork and iron wear to sheep, donkeys, cattle, horses and camels before progressing onto the covered bazaar, believed to be the biggest in Central Asia. The afternoon & evening will be free for you to spend at your leisure. Overnight at the hotel.
Meals: Breakfast
Day 6: Kashgar – Torugart – Tash-Rabat
Transfer to Torugart Pass. Meeting with Kyrgyz driver and guide at the border. Transfer to Tash-Rabat (115 km), the Caravan Saray of the 11th century, served as a fortress for travelers along the Great Silk Road. This is a carefully restored stone building. Overnight in yurts (Kyrgyz dwelling).
Meals: Breakfast/Dinner
Day 7: Tash-Rabat – Kochkor
Breakfast. Visiting Tash-Rabat caravanserai. Transfer to Kochkor. On arrival visiting a felt carpet workshop on the way where you can see the process of making Kyrgyz National carpets. Home stay overnight in Kochkor.
Meals: Breakfast/Dinner
Day 8: Kochkor – Cholpon-Ata
After breakfast transfer to Issyk-Kul Lake, the second largest alpine lake in the world. Visiting petroglyphs in the open air and Grigirievskoe Gorge. Overnight at the hotel near the lake.
Meals: Breakfast/Dinner
Day 9: Cholpon-Ata – Bishkek
At 10 am transfer to Bishkek. On the way stop to see Burana tower, which is left from ancient city Balasagyn (9-13th centuries). Farewell dinner. Overnight at the hotel or guest house.
Meals: Breakfast/Dinner
Day 10: Bishkek – airport
Transfer to the airport. End of the tour.
Meals: Breakfast 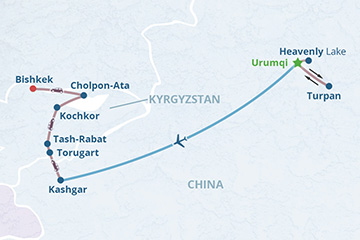 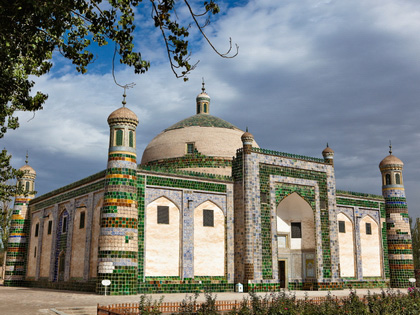 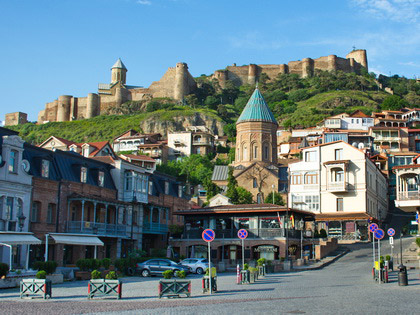 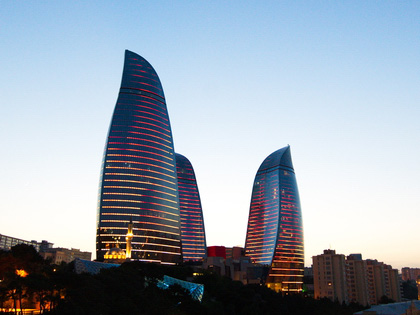 Tour to Uzbekistan and Azerbaijan on the Silk Road
8 Days | from US$ 1,190 / person
Tashkent, Bukhara, Samarkand, Baku, Gobustan, Absheron, Khinalug
All year round 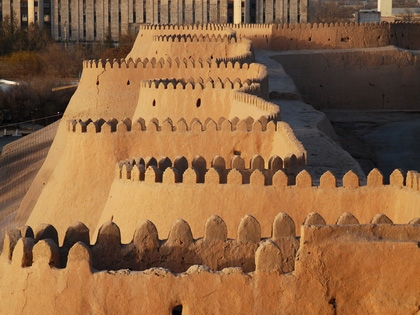