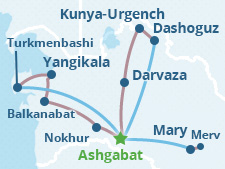 Turkmenistan's borders closed in December 2019 and have yet to reopen. If they remain closed, in lieu of the 3-day visit to Turkmenistan you will visit the Aral Sea in Uzbekistan instead.

Discover this mysterious and fascinating country on our 8-day tour that showcases Turkmenistan’s historical and scenic highlights – from the gleaming city of Ashgabat to the ancient ruins of Merv, the fiery Karakum desert, and beyond... This longer Turkmenistan tour is suitable for those with a bit more time, who want to see as much of the country as possible. See and experience what Turkmenistan is most famous for, including tracing the legacy of the former President, Niyazov, in the marble capital city of Ashgabat, camping next to the glowing Darvaza Gas Crater, and exploring the UNESCO World Heritage Sites of Ancient Merv and Kunya-Urgench. In addition, take the opportunity to get to know the real Turkmenistan as you observe life in desert and mountain villages and journey west to see the stunning Yangikala and Yangisuv Canyons and some of the country’s holiest pilgrimage sites.

This scheduled tour can easily be combined with the Scheduled Uzbekistan Group Tour.

Tour Request
US$ 2,270 / person
US$ 340 single supplement
100% guaranteed departures –
even if there is only ONE traveler
Small Group Escorted Tours of Turkmenistan 2023-2024 (6)
All Turkmenistan Tours 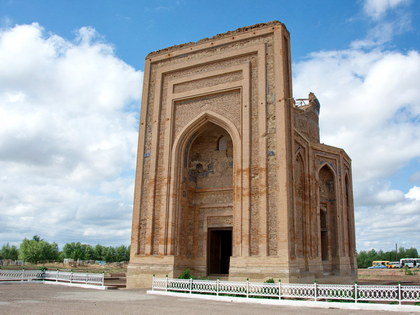