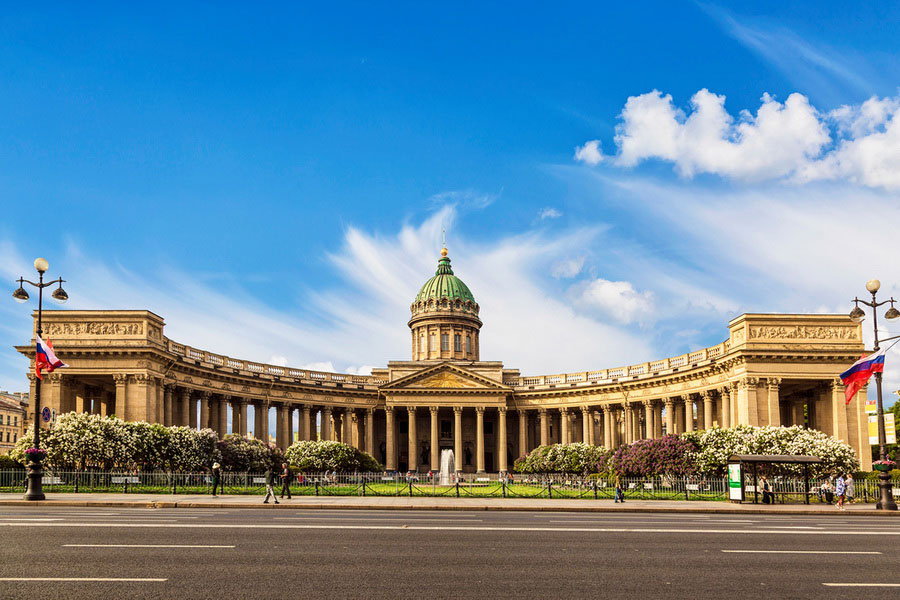 An enchanting tour of the Kazan Cathedral in is a dream of any tourist who found himself St. Petersburg. This marvelous temple, which has no analogues all over Russia and no similarities to any other Orthodox church, is the custodian of unique treasure - the icon of Our Lady of Kazan - at all times regarded as miraculous. The icon dated the end of the 16th century appeared in St. Petersburg in 1710: it was brought from Moscow by the Empress Parascheva Fedorovna. The shrine was placed in the church of the Nativity of the Blessed Virgin Mary. But with time the appearance of the church ceased to comply with the elegant image of the capital, so in 1799 Emperor Paul I held a contest for the project of Kazan Cathedral as the principal church of the capital, the national heritage of Russia. Besides, the Emperor Paul wanted to integrate the features of the Cathedral of St. Peter's in Rome in the design. As a result, the construction, which lasted over a decade, was entrusted to Andrei N. Voronikhin in 1801. In 1811 the amazed St. Petersburg citizens saw a majestic temple, the biggest at that time in St. Petersburg.

The main facade of the Kazan Cathedral was adorned with grand colonnade standing in a semicircle, in the manner of an ancient temple. The colonnade of 96 13-meter Corinthian columns is arranged in four rows and ends on 2 sides with monumental portals. At the center of the colonnade there is a portico consisting of six columns. From the northern and western sides the colonnades are also framed with facades. All in all there are 136 columns around the Cathedral, their height is 13 meters, the thickness at the bottom - about 4 meters, on the top - 3 meters. In the heart of the cathedral rises the majestic dome crowned with a cross. The dome is executed on the foundation of metal parts. The diameter of the dome is 17 meters. The height of the cathedral with a dome reaches 71.6 meters. The facades of the church are faced with gray stone and richly decorated with reliefs and statues. Kazan Cathedral, built entirely of local materials by Russian masters, became a magnificent masterpiece of Russian classicism, based on the best examples of European architecture. In particular, the building bears the features of Cathedral of St. Peter's in Rome.

Sculptures were used for exterior decoration. On the southern, western and northern sides of portals there are 12 bas-reliefs depicting events from the life of the Holy Virgin. The interior of Kazan Cathedral was designed as a majestic secular hall of a palace. The painting of the Kazan Cathedral and creation of icons was trusted to prominent artists.

The Cathedral was completed prior World War II of 1812, the fact, which provided additional historical glory to the Cathedral. It turned into the repository of the sacred relics of the victorious war: the war booty, the keys of the conquered cities, marshal batons were brought there. In 1813 Kazan Cathedral was used as the burial place for the field marshal Mikhail Kutuzov. In 1837 the monuments to field marshals Kutuzov and Barclay de Tolly were built in front of the cathedral.

After the 1917 revolution the services in the cathedral were discontinued. In 1932 the Museum of the History of Religion and Atheism was opened in the Kazan Cathedral. The miraculous icon was moved to Vladimirsky Cathedral.

On November 4, 1990 on the day of celebration of Kazan Icon of the Mother of God for the first time after over seventy-year break the Divine Liturgy was served in the building of the cathedral.

Currently Kazan Cathedral has been awarded the status of the Cathedral of St. Petersburg.