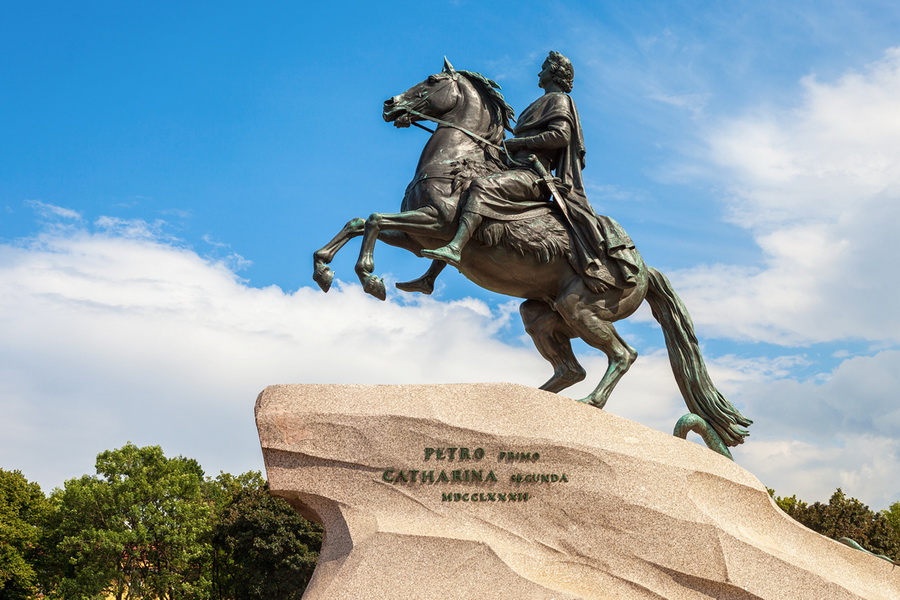 The grandiose «Bronze Horseman» - the monument to the founder of the city, Peter I towers above the Senate Square like a silent custodian of the city. This is the first full-length monument in Russia. It was erected during the reign of Catherine II in 1778 according to the model made by the sculptor Etienne Falconet. The sculptor created the model of the horse. The head of Peter I was made by the master’s student, Marie-Anne Collot; the snake, crushed by the horse’s hoofs, was produced by the sculptor Fyodor Gordeyev.

In terms of perfection and craftsmanship the monument to Peter I is by right considered one of the highest achievements of monumental plastic art of the 18th century. The Emperor in proud and majestic pose of the winner sits on the reared horse if personifying the power of his empire. The head of the tsar is adorned with the laurel wreath, the symbol of glory and victory. Peter is shown stretching his hand towards the Neva, the Academy of Sciences and the Peter and Paul Fortress, symbolically marking the main milestones of his reign: education, trade and military power. The monument is also unique due to the fact that it rests on only three points of support: hind legs of the horse and the snake’s tail.

The pedestal for the monument is made of the gigantic granite boulder called the «Thunder Stone». The boulder got its name from local residents for the wide crack, which ha been allegedly caused by lightning during thunderstorm. The «Thunder Stone» was found in 1768 on the shores of the Gulf of Finland and later was processed to look like natural rock. The weight of the monolith is about 1,600 tons. The inscription on the pedestal says: « To Peter I from Catherine II».

Falconet worked on the monument for 12 years and only in 1778 all works related to the monument were finished. But by the time of the monument installation the relations between the sculptor and the Empress worsened to such extent that it was declared that Falconet’s role in the monument creation was purely technical. The injured master did not see the opening of the monument because he had left Russia earlier. The grand opening of Peter I monument on the Senate Square was held on August 7, 1782 and became a significant event in the history of Russia.

Thanks to the poem by Pushkin in which he calls the sculpture of Peter «The Bronze Horseman», people began to associate the monument with the name. Soon it became so popular that become practically official. The monument itself has become one of the symbols of St. Petersburg.