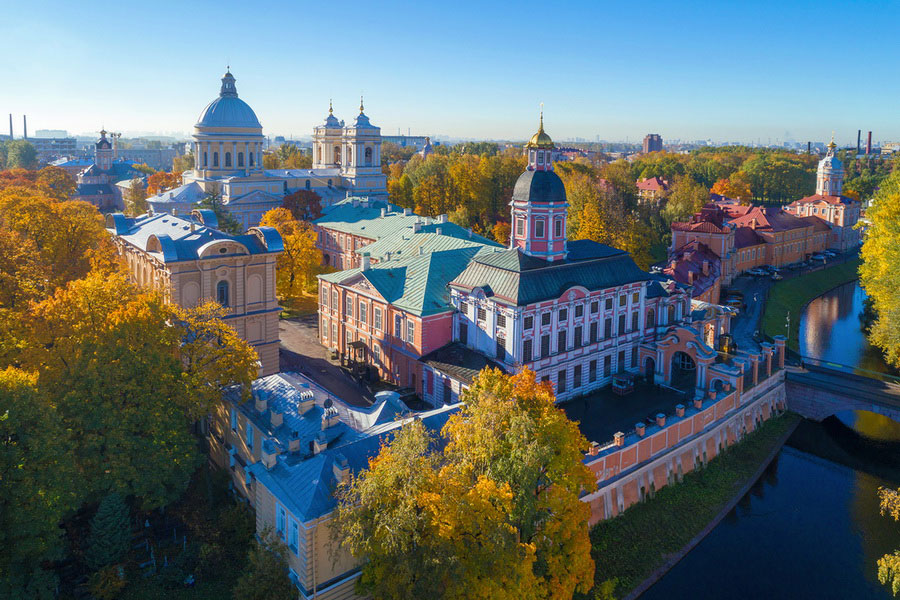 The construction of the monastery dates back to the founding of St. Petersburg. Almost simultaneously with the Peter and Paul Fortress in 1710, Peter I laid the monastery foundation on the left bank of the Neva river in the name of Holy Trinity and St Alexander Nevsky to commemorate the great historic victory over the Swedes won by Alexander Nevsky in 1240. The erection of the monastery went on intermittently for the most of the 18th century. The buildings of the monastery complex were built in the style of «Peter's Baroque». The core structure of the whole architectural complex is the hexagon formed by two-storeyed buildings. The territory of the complex includes 12 churches, seminaries and religious academies. Of all the buildings of the monastery particulary noticeable are the Annunciation Church and the Trinity Cathedral.

The first to be constructed was the Annunciation Church. The date of consecration coincides with the date of the Lavra founding - 1713. The Annunciation Church - the oldest stone church of St. Petersburg - was the burial place of the members of the Imperial family and public figures of Russia. There one can see the grave of the great military leader, Alexander Suvorov as well as other historical and artistic gravestones of the 18th -19th centuries.

The main monastery's church is the Cathedral of the Holy Trinity. It stores the relics of the Grand Duke Alexander Nevsky which in August 1724 were transferred from Vladimir to St. Petersburg. The contemporary temple was erected in 1776-1790.

This majestic cathedral is crowned by a mighty dome; on its sides there are symmetrical bell-towers. The dome of the church rests on a high drum with 16 windows. The massive architecture of the church is combined with the lavish interior decoration. The interior of the building is decorated with bas-relief panels depicting events from the Old and New Testaments. The beautiful marble iconostasis is a masterpiece of fine art.

Other landmarks there include the stone church of St. Lazarus (1717) over the grave of Natalia, the beloved sister of Emperor Peter I; the Church of St. Theodore (1745-1750), the memorial Church of St. Alexander Nevsky (consecrated in 1724).

There are several cemeteries located outside the monastery square. The oldest of them is the Lazarevskoye cemetery dating back to the time of Peter I. It became the burial place of the outstanding statesmen of Russia, as well as scholars, writers, architects, etc.

On the right from the Lazarevsky cemetery is the Tikhvin cemetery with the memorial church of Tikhvin Icon of the Mother of God. The famous Russian writers and poets N. Karamzin, V.A. Zhukovskii, I.A. Krylov, F.M. Dostoevsky, composers Mikhail Glinka, A. Dargomyzhsky, M.P. Mussorgsky , N.A.Rimsky-Korsakov, A.P. Borodin, Pyotr Tchaikovsky as well as artists A.I. Ivanov, A.I. Kuindzhi, I.I. Shishkin and many architects, sculptors and artists were buried there.