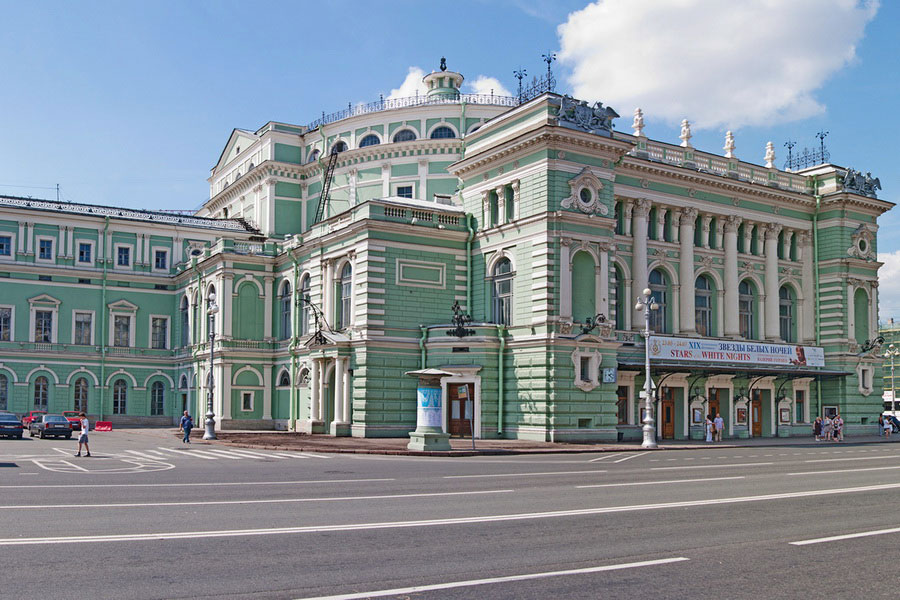 The Mariinsky Theater of St. Petersburg is the most important center of culture recognized not only in Russia but also throughout the world. While in Moscow the main temple of opera and ballet is the Bolshoi Theater, in St. Petersburg it is certainly “Mariinka”.

The birth of the theater was made possible thanks to the Empress Catherine the Great. In 1783 she issued the decree on the foundation of the Stone Theater. This building later was used as the Conservatory. The theater moved to the building across from it. It was built in 1847-1848 by the architect Albert Kavos. It was a wooden theater-circus with a large circular arena. The building was destroyed by the fire ten years after. Already in 1860 Kavos restored the building and added a theatrical stage. According to the eyewitnesses «it was the finest theater in Europe». The magnificent decor of the building, the most beautiful in St. Petersburg, and the decoration of the house have been mostly preserved until today. The dazzling white sculptures, soft glow of gold, blue and light-blue interior and curtain colors instead of the classic red and burgundy form the palette of the unique house. The solemn opening of the reborn theater took place on Oct. 2, 1860 with the premiere of Glinka’s «Life for the Tsar». The theater got its name, the Mariinsky, after another great Russian woman - the Empress Maria Alexandrovna, the wife of Alexander II The Mariinsky Theater has become the center of Russian culture having created its unique school of ballet. The stage of “Mariinka” saw the triumphs of such ballet masters such as Anna Pavlova and Galina Ulanova, Rudolf Nuriyev, grand masters of opera - Feodor Chaliapin, Leonid Sobinov. Its stage was the place of the world’s premieres for a number of the masterpieces of Russian opera classics created by Glinka, Mussorgsky, Rimsky-Korsakov and Tchaikovsky.

Theater keeps the memory of the great conductors, artists and directors, including the legendary V. Meyerhold. The current artistic director of the theater is Valery Gergiev. The current stars of the Mariinsky Theater are Anna Netrebko, Ulyana Lopatkina, and Vasily Gerello. The theater has successfully toured around the globe.