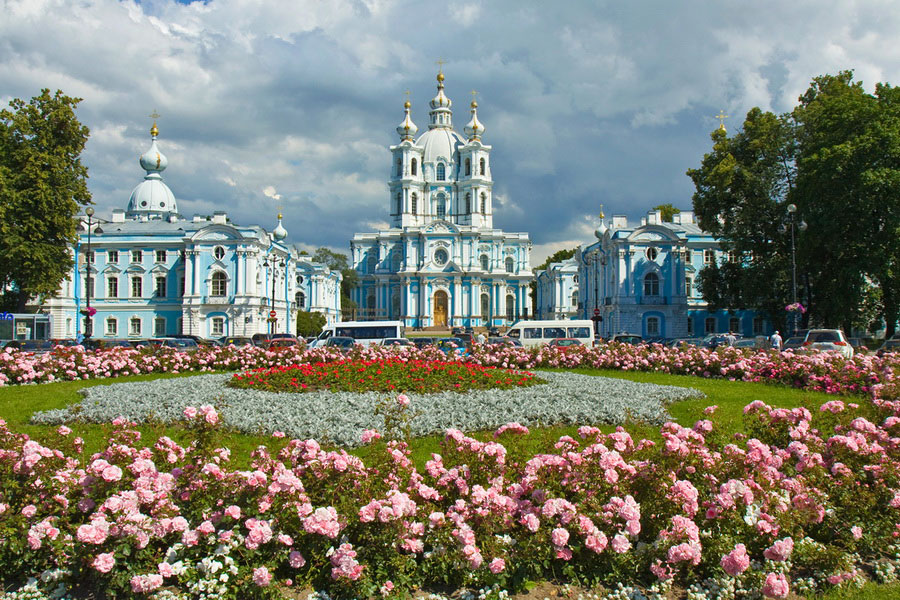 Among the outstanding works of Italian architect Francesco Bartolomeo Rastrelli is the ensemble of Novodevichy Convent in Russia, and Smolny Cathedral stands proudly as the centerpiece of the entire complex.

Smolny Cathedral in St. Petersburg is a true masterpiece of Russian architecture, a bright, graceful building lavishly decorated with columns, pilasters and numerous decorative elements. Its facades are richly ornamented with gilding, giving the airy building an ornate and elegant look. Its sky-blue exterior and Baroque-style architecture bear resemblance to Nikolsky Cathedral, another St. Petersburg landmark built in the same era.

Small churches stand at each of the chapel’s four corners, each one topped with a helmet-shaped dome, a large cupola and a cross. Due to its architectural design, the cathedral gives the impression that it is larger than it actually is. The closer you approach, the more it appears to decrease in size, all the while retaining its magnificent appearance.

The construction of Smolny Cathedral did not come easily. Empress Elizaveta Petrovna, who at one time wished to become a nun, decided to build a convent on her palace grounds, a place where she spent much time during her youth. In 1744, the empress instructed B.F. Rastrelli, who had already been commissioned for work on St. Petersburg’s Winter Palace, to draw up plans and estimates for the construction of the abbey. Her dream was to build a monastery ensemble with the highest bell tower in Russia, which would surpass all previous structures in beauty and grandeur. The architect spent almost 4 years working meticulously on the ensemble’s design. In the summer of 1748, the solemn laying of the foundation took place, and by fall of that year, construction on the cathedral had commenced.

The official name of the abbey was Resurrection Novodevichy Convent. However, it was situated near the tar yard of the Admiralty Shipyard, where tar was cooked and stored for use in the construction of ships. Over time, the shipyard acquired the name "Smolny", and since the ensemble was built near the Smolny Courtyard, it too was soon nicknamed Smolny.

In 1761, after the death of Elizaveta Petrovna, construction on the cathedral temporarily ceased. This grand project started by Bartolomeo Rastrelli was continued by the architect Yuriy Velten during the reign of Catherine II. The architect was ordered to finish the complex, but work progressed very slowly. In 1764, by decree of Catherine II, the “Imperial Educational Society of Noble Maidens” was founded in St. Petersburg, and Smolny Convent chosen as the place where the girls would live. Girls attending the training were soon nicknamed Smolyanka.

In total, Smolny Cathedral was built over the course of 87 years, the longest construction project in all of St. Petersburg. The project was finally completed by the outstanding architect V.P. Stasov, who finished construction during the reign of Nicholas I and considered it an honor to complete was the great Rastrelli had begun. On July 20, 1835, Smolny Cathedral was consecrated in honor of the resurrection of Christ. The huge church hall, which can accommodate up to 6,000 people, was decorated with marble, three majestic iconostases and a balustrade of faceted crystal installed in front of the altars. For the next 90 years, services were regularly held in the church.

In 1922, during the post-revolutionary period, the decision was made to close the cathedral. For decades, the ensemble was used as a warehouse, and during World War II a bunker was constructed in the basement of the cathedral.

In 1967 the church was reconstructed, and in 1974 a branch of the Museum of the History of Leningrad was opened inside Smolny Cathedral. In 1990 a concert and exhibition complex was added, and since 2010 regular worship services have again been held in Smolny Cathedral.

Unfortunately for Elizaveta Petrovna, the towering belfry was never completed according to her wishes, and today the cathedral at St. Petersburg’s Peter and Paul Fortress now boasts of the highest tower in the city. Yet today the belfry of Smolny Cathedral, which overlooks the city center and the Nevsky Bridges, is the highest museum observation deck in St. Petersburg and remains open to tourists wishing to catch a bird’s-eye glimpse of the city.

Tours of the church are generally conducted on Saturdays and Sundays at 12:00, 13.00, 14.30 and 16.00. On a guided tour you can learn more about the history surrounding the ensemble and discover the unique structures in the cathedral’s attic passageways, preserved since the time of Rastrelli.