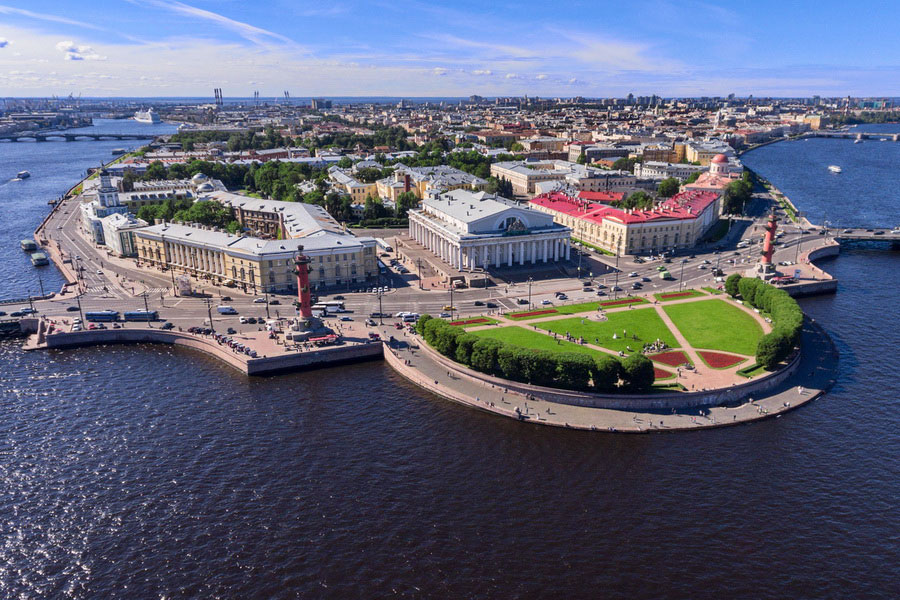 St. Petersburg, as you already know, is situated on the islands, the largest of which is Vasilievsky Island. Its area is about 1,050 hectares. Vasilievsky Island’s development began as an extension of St. Petersburg in 1715 and has now become its cultural and administrative center. In the first decades of the 18th century such buildings as Twelve Collegia, the main building of the Academy of Sciences, the Kunstkamera, one of the most remarkable museums in St. Petersburg were erected.

The spit of Vasilyevsky Island relates to the elongate portion of the Vasilyevsky Island on the east. Its main attraction, the Exchange, was built in the first half of the 19th century. The huge structure in the form of an old ancient temple is captivating in its beauty and purity of classical architecture. On the Exchange sides there are symmetrical rostral Columns. They are called so because of the decorations – ship bows of ship - rostrum. In fact, the columns are two giant 32-m beacons installed there in 1810. At the foot of the columns sit stone sculptures personifying the rivers: the Volga, the Neva, the Volkhov and the Dnieper. In front of the Exchange there is a semicircular area with a quay faced with gray granite. The embankment wall is decorated with lion masks, and the ramp - with granite balls.

Since 1940 the Exchange building is occupied by the Central Naval Museum where you can get acquainted with the history of Russian Navy. Other notable buildings on the Spit of Vasilyevsky Island are the Customs and the warehouse located on both sides of the Exchange and built in 1826-1832.