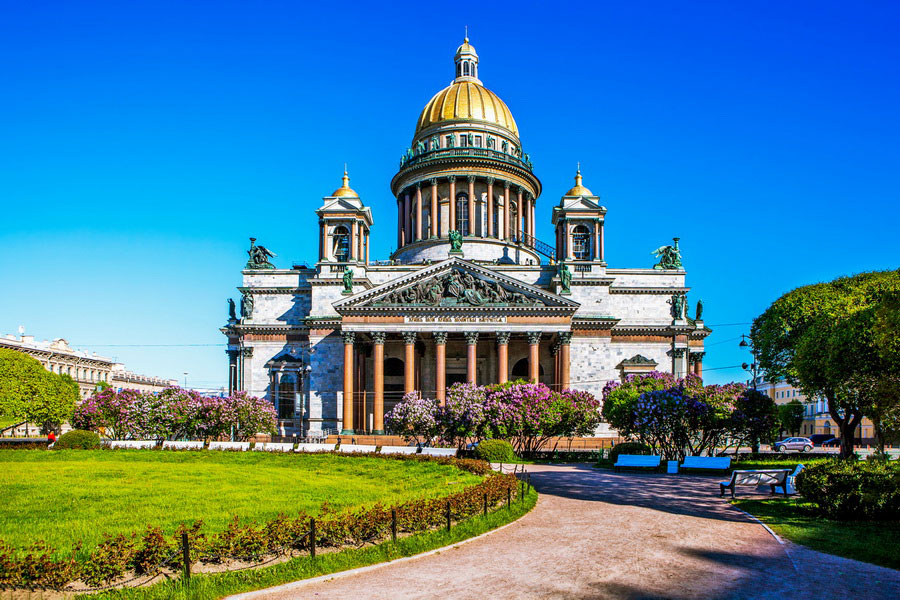 The words glorifying the beauty of this cathedral have long crossed the borders of Russia. This jewel of architectural art enthralls the art connoisseurs all over the world. It is the pride and glory of St. Petersburg citizens. Majestic Isaac’s, as most people call the cathedral, produces a gamut of emotions by its noble but at the same time luxurious appearance. The flawless silhouette of the golden dome clearly seen against the background of blue sky is a symbol of the Northern Capital.

To begin with, St. Isaac's Cathedral is one of the highest domed buildings in the world: its height is 102 m. The area totals 4,000 square meters; the interior capacity – 14,000 people. The diameter of its golden dome reaches 22 m. In terms of the size it only a tad smaller than Cathedral of St. Peter's in Rome, St. Paul's Cathedral in London and the Cathedral of Santa Maria in Florence. The Temple can house 10 thousand people. To fully decorate it 400 kg of gold and 16 tons of malachite were used. The history of the cathedral is unique and even dramatic just like the fate of many grand churches in Russia. Its erection was initiated by Emperor Peter I. He conceived the building as a dedication to his heavenly patron - Byzantine St. Isaac Dalmatian. Initially, Peter had built a wooden church in 1710. And on Feb. 19, 1712 Peter I and Catherine I were married there. In August of 1717 the new stone church was laid on its place. Unfortunately, because of the proximity to the Neva River, it started to sink. It was replaced by the third version of St. Isaac's Cathedral offered by the architect Antonio Rinaldi, but its appearance was so ridiculous and mismatching the front face of the city, that in 1809 Alexander I announced a contest for the best design of the new cathedral. The winner was the French architect Auguste Montferrand. Montferrand started the construction in 1818. It lasted for long 40 years. The result of his brilliant work was the monumental five-head Cathedral in the classical style. St. Isaac's Cathedral was solemnly opened on May 30, 1858 and proclaimed the Cathedral of Russian Orthodox Church. It was the place for church services, baptizing of the members of the imperial family. The cathedral was visited by kings and queens of different states, the presidents, and foreign clergy: Eastern Metropolitans, Catholic and Anglican bishops, Armenian Catholicoses.

The entire image of St. Isaac's Cathedral is permeated with the idea of luxury and imperial grandeur. The walls with arched windows are faced with gray marble. The cathedral is supported by columns of red granite. Each of them stands 15 m tall weighing 100 tons. The bronze doors, each wing of which weighs 10 tons, are decorated with high reliefs and ornaments. On the corners of the building’s pediments there are 16 statues of the apostles and evangelists. Besides, the corners are are accentuated with the statues of angels with lanterns. On the front you can see the scenes from the Bible. Gold-plated dome is of original design and is composed of three shells. Its gilding required about 100 kg of pure gold. The cathedral is beautiful both externally and internally. The interior design is composed of more than 300 paintings, mosaics, sculptures, various kinds of precious stones and gilding. Of particular interest is one of Russia's largest stained glasses with the area of 28,5 square meters. Inside, the cathedral walls are faced with expensive Italian and Russian varieties of marble and other stones: malachite, lapis lazuli, porphyry. That is why St. Isaac's Cathedral is also called «the Museum of stones».

The artistic design of the cathedral includes the largest collection of Russian paintings of the mid-19th century with over 150 pieces. Among them are the works of famous painters Vasily Shebuev, Carl Brullov, Fyodor Bruni. More than 300 statues, sculpture groups and reliefs were made by Ivan Vitali. St. Isaac's Cathedral has no analogs both in the Russian and world’s culture. Museum-Monument St. Isaac's Cathedral is one of the finest cathedrals in Europe and one of the most visited museums in St. Petersburg. In 1859 in the heart of St. Isaac's Square, under the leadership of Montferrand was installed the equestrian monument of Emperor Nicholas I by P. Klodt. In 1928, the cathedral was closed and functioned as a museum of atheism. And in 1990, a solemn liturgy took place in St. Isaac's Cathedral.